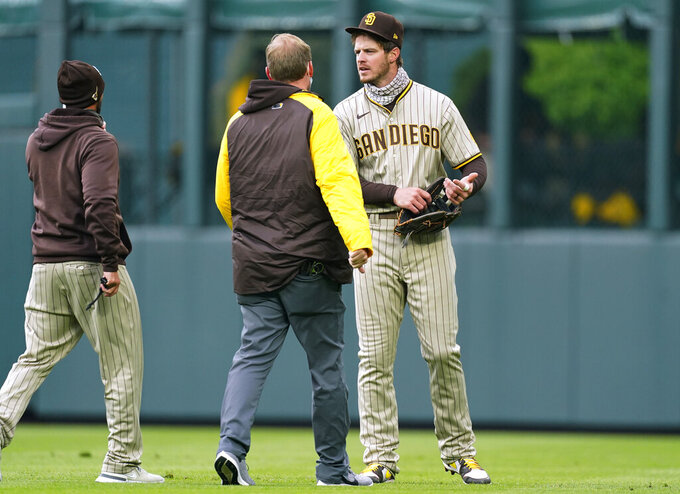 San Diego Padres manager Jayce Tingler, left, and a trainer check on right fielder Wil Myers after he ran into the wall catching a fly ball hit by Colorado Rockies' Garrett Hampson during the first inning of a baseball game Tuesday, May 11, 2021, in Denver. (AP Photo/David Zalubowski)

DENVER (AP) — Already minus star Fernando Tatis Jr. and two backups before the first pitch because of COVID-19 concerns, the San Diego Padres then needed to pull Wil Myers and Eric Hosmer in the middle of the game for virus-related reasons.

The shorthanded Padres wound up beating Colorado 8-1 on Tuesday night, boosted by Manny Machado's home run and five RBIs, but suddenly found themselves in a precarious position.

“Obviously it’s not ideal, but I want to give credit to our guys tonight. We had a lot of hectic things going on,” he said. “We had a short bench and everybody stepped up and filled in.”

Tatis tested positive for COVID-19 and was put on the injured list earlier in the day. The dynamic shortstop was joined by utility players Jurickson Profar and Jorge Mateo, who were sidelined prior to the series opener as part of Major League Baseball's contact tracing health and safety protocols.

Myers knocked into the right-field wall in the first inning while catching Garrett Hampson’s deep flyball. Myers appeared to be shaken up on the play and was checked by team trainers, and remained in the game.

But in the third, he was replaced in right field by Tucupita Marcano.

While he did bang his elbow on the play, Myers was removed when the team learned he had tested positive for the virus, Tingler said. Hosmer was subbed out of first base in the seventh for contact tracing.

“It’s a bummer,” Machado said. “It definitely has been a down day. It’s unfortunate, the situation that is going on.”

“We have a great group of guys in there, who step in for each other. We had guys who flew in and stepped up big time for us today,” he said.

Down 1-0 in the fifth, the Padres went ahead when Machado followed Jake Croneworth’s double with a drive off Antonio Senzatela (1-4) that soared into the left-field bleachers.

The Padres employed a pitching by committee approach ahead of Wednesday’s doubleheader at Colorado. Dinelson Lamet went the first two innings and allowed one run on one hit.

Miguel Diaz (1-0) earned the win with three innings of scoreless relief. Senzatela made his first start since coming off the injured list earlier in the day because of a groin strain.

“It’s good to have him back,” Rockies manager Bud Black said. “His arm felt good, just felt fine. So, you know, we didn’t have much of a sixth (inning) but he kept us in the game through five.”

Padres: With Tatis, Profar and Mateo placed on the injured list, INF/OF Tucupita Marcano and RHP Nabil Crismatt were recalled from Triple-A El Paso and selected OF John Andreoli to the roster.

Rockies: 1B C.J. Cron has been placed on the 10-day injured list, retroactive to last Friday, with a lower back strain. Senzatela was activated from the IL prior to the game, returning from a right groin strain.