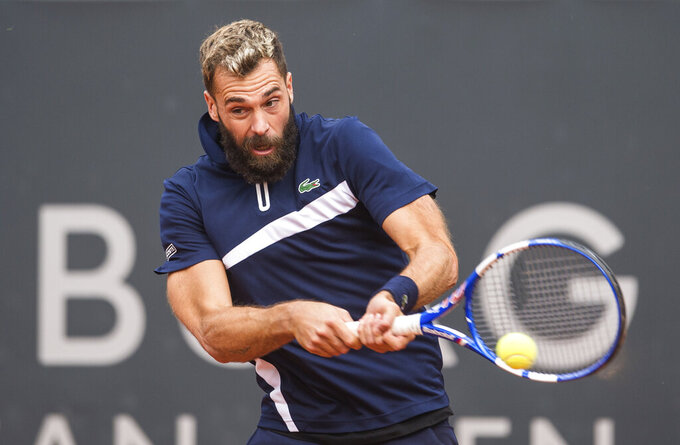 Benoit Paire of France returns during his 1st round tennis match at the ATP Tour - German Open in Hamburg, Germany, Wednesday, Sept. 23, 2020. (Daniel Bockwoldt/dpa via AP)

HAMBURG, Germany (AP) — French tennis player Benoit Paire was allowed to compete at the Hamburg Open despite twice testing positive for the coronavirus, he said Wednesday.

Paire retired from his opening-round match while trailing Casper Ruud 6-4, 2-0 on Wednesday with what the ATP Tour said was “dizziness.”

Paire withdrew from the U.S. Open after testing positive and spending more than a week in isolation. He then played at the Italian Open last week, losing in the first round.

According to German news agency dpa, Paire said he twice tested positive while in Hamburg but then had a negative test. Paire said he was not sure if he would play at the French Open, which begins Sunday, and would end his season early if he wasn't allowed to compete.

The ATP and local organizers defended the decision to let Paire play. The ATP said that Paire “was cleared to compete at the tournament in compliance with local health regulations and ATP protocols” after medical analysis.

“According to tournament doctor Dr. Volker Carrero, it is not uncommon that three weeks after a positive result, fragments of the virus can still be found inside the body," the Hamburg Open said in a statement. "Paire has not shown any symptoms of disease and has not been contagious at any time. Local health authorities in Hamburg made the decision on Saturday that Paire is allowed to play.”

Second-seeded Stefanos Tsitsipas wrapped up a 6-3, 6-1 win against Dan Evans in one hour, bouncing back from a first-round loss at the Italian Open last week. The Greek player faces qualifier Pablo Cuevas in the second round.

Roberto Bautista Agut, seeded fourth, came from a break down in the deciding set to beat Dominik Koepfer 6-3, 3-6, 6-3. Bautista Agut's quarterfinal opponent is Andrey Rublev, who beat Tommy Paul 6-1, 3-6, 6-2 in their second-round match. Rublev only landed 39 percent of his first serves in the deciding set, but the fifth-seeded Russian broke the American three times in a row.

Cristian Garin stayed on course for his third clay-court title of 2020 with a 6-2, 7-6 (3) win over Yannick Hanfmann to set up a quarterfinal with Kazakh player Alexander Bublik.