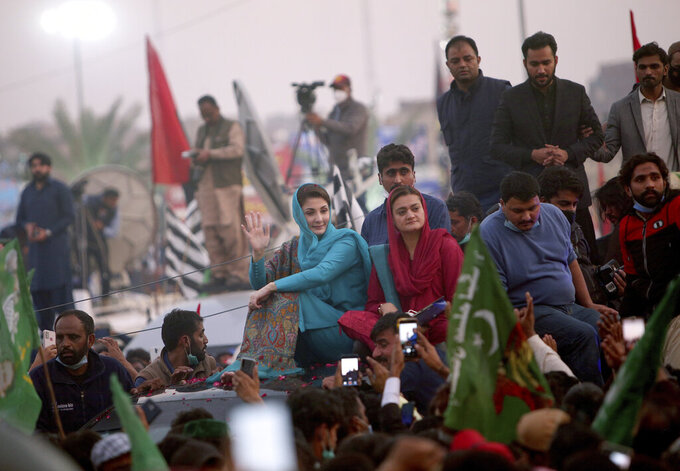 Maryam Nawaz Sharif, center, in blue dress, a leader of the Pakistan Democratic Movement, an alliance of opposition parties, waves to her supporter during an anti-government rally, in Multan, Pakistan, Monday, Nov. 30, 2020. Despite a government ban and arrests of hundreds of activists, Pakistani opposition supporters rallied in a central city on Monday, calling on Prime Minister Imran Khan to resign over alleged bad governance and incompetence. (AP Photo/Asim Tanveer) 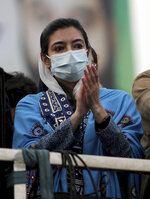 MULTAN, Pakistan (AP) — Despite a government ban and arrests of hundreds of activists, Pakistani opposition supporters rallied in a central city on Monday, calling on Prime Minister Imran Khan to resign over alleged bad governance and incompetence.

The rally in the city of Multan was held a day after police, on orders from the government, carried out the arrests and banned the gathering, defending the move as necessary to combat the coronavirus pandemic in Pakistan.

Police earlier in the day acknowledged arresting over 370 people, while opposition groups put the number at more than 1,800. Authorities in Multan also switched off the area's mobile phone network.

On Sunday night, security forces placed shipping containers on major roads to block off the path to a public park where the opposition planned to hold the protest. But opposition leaders defied that to march to the park, setting off clashes that led to the arrests.

Among those arrested was Ali Musa Gillani, the son of former Prime Minister Yousaf Raza Gilani.

The government blamed the pandemic for banning the protest, though security forces have over recent months repeatedly disrupted opposition events and arrested its leaders. Since February when the outbreak started, Pakistan has reported more than 398,000 cases and 8,025 deaths.

Ahead of the rally, government spokeswoman Firdous Ashiq Awan accused the opposition of “doing politics at the cost of people’s lives,”

Maryam Nawaz, the daughter of former Prime Minister Nawaz Sharif, who lives in exile in London despite being sought on corruption charges by a Pakistani court, attended the rally. Earlier in the day, she told reporters she was not afraid of arrest and that the rally would take place at all costs.

“There is no doubt that this government will no more be in power in the coming days, God willing, and I have no doubt about it,” she said.

Also in attendance and marking her political debut was Assefa Bhutto Zardari, the daughter of former Prime Minister Benazir Bhutto, who was assassinated at an election rally in the garrison city of Rawalpindi in 2007.

Assefa received an emotional welcome and applause as she represented her brother Bilawal Bhutto Zardari, the chairman of Pakistan People's Party who was unable to attend after testing positive for the coronavirus. Assefa said that the countdown for Khan's ouster has started.

Firebrand opposition politician Maulana Fazlur Rehman of the Pakistan Democratic Movement vowed to hold a massive in Lahore on Dec. 13, after which he and his supporters would march toward the capital, Islamabad, to “kick out" Khan's government.

Pakistan’s military has ruled this country of 220 million people — directly or indirectly — for most of its history. Successive attempts at protracted democracy have been interrupted by military coups, the last one in 1999.

Pakistanis went to the polls in 2008 and elected their first civilian government in 12 years. There have been three consecutive elections after that. The military and intelligence services maintain a tight grip on the country's politics and are believed to back Khan, who came to power in 2018.