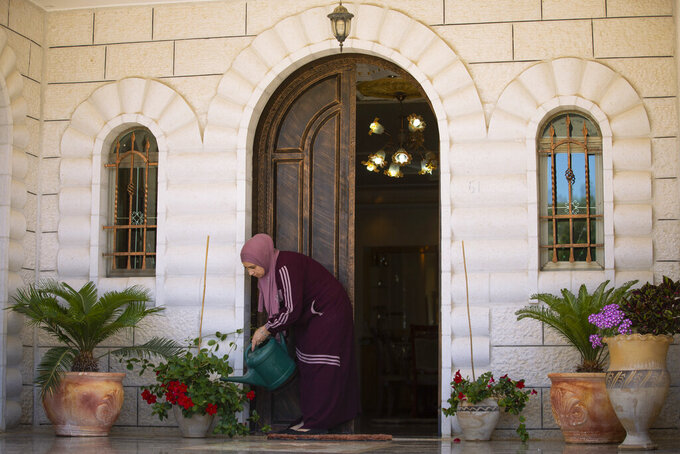 Sanaa Shalaby, estranged wife of Muntasser Shalaby, who Israeli security forces accuse of carrying out a May 2 shooting that killed an Israeli and wounded two others in the occupied West Bank, waters plants at her home in the West Bank village of Turmus Ayya, Thursday, June 3, 2021. Shalaby is waging a legal battle to prevent Israel from demolishing the two-story villa where she lives with her three youngest children that's drawing attention to Israel's policy of punitive home demolitions, which rights groups view as collective punishment. (AP Photo/Majdi Mohammed)

TURMUS AYYA, West Bank (AP) — Sanaa Shalaby says she had no idea what her estranged husband was up to until Israeli soldiers raided her home in the occupied West Bank last month.

Now she’s waging a legal battle to prevent Israel from demolishing the two-story villa where she lives with her three youngest children. It's drawing attention to Israel's policy of punitive home demolitions, which rights groups view as collective punishment.

Israeli security forces arrested her husband, Muntasser Shalaby, and accuse him of carrying out a May 2 drive-by shooting that killed an Israeli and wounded two others in the occupied West Bank. Israel says demolishing family homes is one of the only ways to deter attackers, who expect to be arrested or killed and who are often glorified by Palestinian factions.

The U.S. State Department has criticized such demolitions, and an internal Israeli military review in the 2000s raised questions about their effectiveness. The case of the Shalabys — who all have U.S. citizenship — could reignite the debate. Israel's Supreme Court is expected to issue a final ruling on the demolition next week.

Sanaa and her husband had been estranged for nearly a decade. He lived in Santa Fe, New Mexico, where he ran a profitable smoke shop and married three other women in private Muslim ceremonies not recognized by U.S. authorities.

“It's allowed in our religion,” Sanaa said. “I didn't agree to it.”

He came back to the West Bank in April for what she says was one of his yearly visits to see the children. He had also sought treatment for paranoia after having been institutionalized in the U.S. in recent years, according to a deposition he gave to her lawyer.

Sanaa said she knew nothing about the attack and had no indication he was planning anything.

“People commit crimes far worse than this in America and they don’t demolish their homes," she said. “Whoever committed the crime should be punished, but it’s not the family’s fault.”

When the soldiers showed up after the attack they ransacked the home and briefly detained her 17-year-old son. She said they had a large dog that terrified her and her two younger children, a 12-year-old boy and a 9-year-old girl. The soldiers came back weeks later to map out the house for demolition.

Now Sanaa says her children spend all day in bed and refuse to go to school. “I know my children and they were never like this," she said. “My son, Ahmed, has to take his final exams and he can’t study. He opens his book, reads a couple pages and then he walks off.”

An Israeli official said the security agencies believe home demolitions are an effective deterrent. The official declined to comment on the Shalaby case, but said everyone is notified in advance and given the right to contest demolitions in court. Someone in Sanaa's situation would have a “good legal case” if her account is independently verified, the official said.

“There are clear checks and balances," the official said. “We are using it only when we feel that it is necessary, and only because we understand that this is an effective deterrent."

The official spoke on condition of anonymity to discuss security procedures.

HaMoked, an Israeli rights group that has represented dozens of families seeking to halt punitive demolitions and is currently representing Sanaa, says such petitions rarely succeed. Of 83 cases brought since 2014, only 10 demolitions were prevented, it said. In the remaining cases, homes were partially or completely demolished, or apartments in multi-story buildings were permanently sealed off.

Jessica Montell, the group's executive director, says that from a legal perspective the question of whether it serves as a deterrent is irrelevant.

“You don’t collectively punish innocent people just because they’re related to a criminal in the hope that that will deter future criminals. It’s an illegal and immoral policy regardless of the effectiveness," she said.

The Israeli military prepared a report on punitive home demolitions in 2004 that led to a moratorium on the practice the following year, according to HaMoked, which received a Power Point presentation of the classified report in 2008 through a court petition.

The presentation raises concerns about the legality of such demolitions and international criticism of them. It also questions their effectiveness, saying the demolitions might even motivate more attacks. Such demolitions were mostly halted until 2014, when three Israeli teenagers were kidnapped and killed in the occupied West Bank.

A campaign by Jewish settlers to evict dozens of Palestinian families from their homes in east Jerusalem was one of the main causes of last month's 11-day Gaza war, in which Israeli airstrikes demolished hundreds of homes in the militant-ruled territory.

Both forms of displacement summon bitter memories of what the Palestinians refer to as the Nakba, or “catastrophe," when some 700,000 Palestinians fled or were driven out of what is now Israel during the 1948 war surrounding its creation.

Shalaby said she has been in continual contact with the U.S. Embassy but was told it couldn't do anything about the demolition.

The State Department declined to comment on the case, citing privacy concerns. But it said it was opposed to the punitive demolition of Palestinian homes. “The home of an entire family should not be demolished for the actions of one individual,” it said in a statement.

The Israeli Supreme Court will hear Sanaa's case on June 17.

She hopes she will be able to remain in the house that she and her husband built in 2006. She said she had sold her bridal jewelry to help finance the construction. She raised her youngest children in the house, and an older daughter had her wedding there last year during a pandemic lockdown.

“My daughter got married here during the time of the coronavirus,” she said, pointing to the front courtyard and smiling at the memory. “It was better than any wedding hall.”