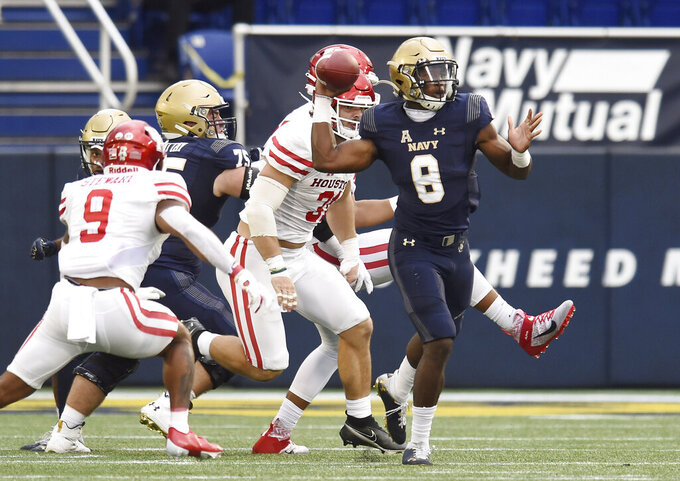 DALLAS (AP) — No. 22 SMU's preparation for Navy's triple-option running game is a little different in this pandemic-altered season.

The Mustangs (5-1, 2-1 American Athletic) are missing a few dozen of the scout-teamers they can normally roll through the repetitions in practice.

“When you play Navy, normally you have a lot of scout team guys, 130 players in your program and you have a scout team ready to go,” coach Sonny Dykes said. “We have 80 guys in practice right now. It’s going to be different.”

Both teams go into Saturday night's game coming off losses. For SMU it was the first of the season, 42-13 at home to No. 7 Cincinnati.

The Midshipmen (3-3, 3-1) thought they finally had some momentum with two straight victories before losing at home to Houston 37-21.

Navy had coach Ken Niumatalolo's second 11-win season last year, including a victory over the ranked Mustangs. Because of the three losses and a season shortened by the coronavirus, the Midshipmen can't get to double digits in wins this year.

“I was encouraged by their spirits Monday, the leadership,” Niumatalolo said. “We’re still in the mix in our conference. Long term, our guys recognize that there’s still a lot to play for.”

SMU quarterback Shane Buechele is averaging almost as many passes per game (37) as Navy's Dalen Morris has thrown all season (39). The Mustangs have the No. 13 passing offense in the country, while Navy is 31st in rushing offense at 186 yards per game.

The overall offensive output is a bit of a mismatch, with SMU ranked 11th at 581 yards per game and the Midshipmen 88th at 288.

Because Navy usually wins with ball control, Dykes says it's important for the SMU offense to counter that by staying on the field.

“They put pressure on you defensively, but they put just as much on you offensively because you’re going to get fewer possessions,” Dykes said. “As a result, you have to execute at a higher level. To me, they’ve really improved their program the last couple of years defensively. They run a lot of different coverages, a lot of different blitzes.”

RETURNING TO THE SCENE

Navy returns to SMU two years after the Mustangs won when they went for the 2-point conversion in the first overtime for a 31-30 victory. It was Dykes' first win since taking over, and the first for SMU against Navy in 20 years.

Dykes and his players had to wait several minutes to celebrate because of a discussion and review over a play where the Mustangs sent an eligible offensive lineman in motion from the tight end spot and threw the 2-point pass to an actual tight end, Hunter Thedford.

“We had a linebacker there,” Niumatalolo said. “He was there, ready to make the play. Just the tight end was taller. Quarterback threw a nice ball. They had a tall tight end.”

Navy has had 23 players make their first career starts this season, the most nationally. Senior defensive end Jackson Perkins is the only Navy player to start all six games. The Midshipmen started three different quarterbacks in the first three games for the first time since 1992. Morris has started the past three.

SMU set a school record with 35 touchdowns rushing last year and has 14 this season, led by Ulysses Bentley IV's eight TDs (ranked fourth nationally). While the redshirt freshman is 11th nationally in rushing yards, 227 of his 546 came against FCS school Stephen F. Austin. He's averaged 55 yards per game in the past three, with a per-carry average of 2.5 yards in two of those games.