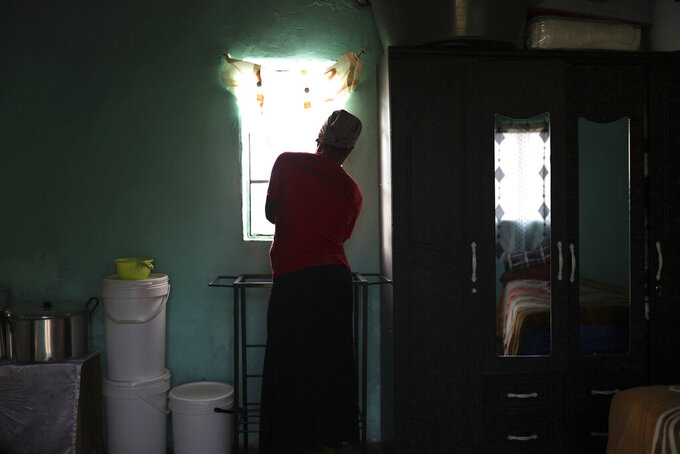 Matefo Litali opens the curtains of her small rented room that she shares with her youngest daughter and a granddaughter, in the town of Ha Thetsane, Maseru, Lesotho, on Friday, Dec. 11, 2020. While she waited for her final paycheck after being laid off, Litali received no income or support for three months. The family survived off food parcels donated by the local church until her salary arrived. “I got so stressed I thought I was going mad,” she explains. “I would spend the whole day in my house sleeping, not doing anything. It got to a stage where I wouldn’t even try to talk with my daughter. She would ask me: ‘Are you sick? What is the problem?’ and I wouldn’t say anything to her. I didn’t want to speak to anyone or ask for help.” (Neo Ntsoma/The Fuller Project via AP)

In her last weeks working the freight shift at the local J.C. Penney store, Alexandra Orozco took out her phone and hit record. The 22-year-old shot a video of the giant black-and-red ’Everything Must go!” posters, and posted it on TikTok in October.

“Slowing losing my job,” she wrote below, days before the store in Delano, California shut for good, one of 156 J.C. Penneys across the United States to close since June of this year.

Since being laid off, she’s applied for a couple of roles - counselling kids, delivering flowers - but has yet to hear back.

“It’s so sad,” she explains over the phone. “And it’s hard to find jobs here.”

Halfway across the world, Matefo Litali experienced upheaval, too. A skilled sewer, the 53-year-old worked at Tzicc Clothing, apparel-maker for U.S-based giants J.C. Penney and Walmart, in Lesotho, a small mountainous country surrounded by South Africa. She was employed for two months before nationwide lockdown measures forced all garment factories to temporarily close in March. After two days back at work, Tzicc confirmed her last day was May 7.

“I felt powerless,” she says. “The first thing that went through my mind was, ‘Why me?’”

Neither woman has met. Nor are they likely to: one lives in a remote agricultural town on the west coast of America, the other 10,000 miles away in Southern Africa. Now, both of their lives - and livelihoods - are linked by a global pandemic that has crushed one of the world’s supply chains and with it, economies, too. COVID-19 lockdowns have obliterated a retail sector already struggling to survive before the coronavirus hit, which has in turn contributed to the collapse of the global garment trade and wreaked havoc for millions of workers, the vast majority women like Orozco and Litali.

This story was reported by The Fuller Project, a global nonprofit newsroom reporting on issues that affect women.

Over the past two decades Lesotho’s garment industry, where 9 out of 10 workers are women, has boomed to become its largest employer, crafting clothes for Levis Strauss, Wrangler and Walmart. While Lesotho is a lesser-known garment powerhouse compared to China or Bangladesh, it’s another example of an economy heavily reliant on U.S. demand. Outside of the African continent, America is the largest recipient of Lesotho’s exports - accounting for almost half - according to the most recently available World Trade Organization data from 2017.

In the U.S, meanwhile, clothing retailers have been hit particularly hard. The country is one of the world’s top importers of clothing, accounting for nearly a quarter of global retail spend. While J.C. Penney hasn’t been profitable since 2010, the 118-year-old chain filed for bankruptcy in May. Six months later, it was bought out but its workforce was slashed by over 10,000 during restructuring, a source familiar with the situation confirmed to The Fuller Project.” . J.Crew, Neiman Marcus and Brooks Brothers also filed for bankruptcy this year.

“And when a big U.S retailer takes a tumble,” says Neil Saunders, managing director of GlobalData Retail, “the effects are felt across the globe.”

In March, as U.S. retailers cancelled or failed to pay for existing orders worth billions of dollars, the effects quickly rippled down the supply chain.

At Tzicc Clothing, roughly one fifth of employees have lost their jobs since May, says Tšepang Makakole of Lesotho’s National Clothing and Textile Workers Union. “For women, it’s a disaster...The industry is facing a total collapse.”

Litali felt weak in the knees when she heard that she was suddenly unemployed. A widow for the last eight years, the seamstress single-handedly supports her youngest daughter, who is 20, and her 4-year-old grandchild. During the lockdown, her employer delayed her final $94 paycheck for three months until May.

The Human Resources manager at Tzicc Clothing, Masefatsa Mofolo, confirmed the company laid off staff due to limited orders.

For months, Litali received no income or support, instead surviving off donated food from the local church until her final salary arrived. “I got so stressed I thought I was going mad,” she says. “I would spend the whole day sleeping.”

Back in California, Orozco occasionally walks past the town’s J.C. Penney. The windows are free from sale signs, the gates locked. “I was close to the cleaning lady who worked there,” she says. “It broke my heart to know I probably won’t ever see her again.”

A spokesperson for J.C. Penney declined to comment on the closures.

Although Orozco lives with her parents, she still has car and phone bills. When her store closed temporarily in mid-March in adherence with COVID-19 measures, she was out of work for three months and applied for unemployment. She used the time to finesse her side-hustle: a make-up business, selling lashes, lipglosses and clothes via Instagram.

Today, both Litali and Orozco’s lives look uncertain. In August, Litali landed a job sewing jeans at another factory, but she fears her temporary contract won’t be renewed.

By next year, Orozco hopes to have saved enough to open a brick-and-mortar store. “It’s stressful but… I know one day it will be worth it.”

Additional research by Refiloe Makhaba Nkune. Louise Donovan is a reporter with The Fuller Project.