As pandemic deepens, Trump cycles through targets to blame 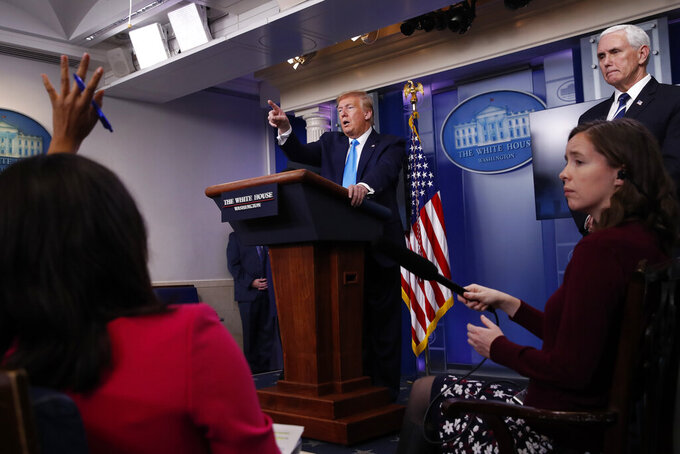 In this April 7, 2020, photo, President Donald Trump calls on a reporter for a question as he speaks about the coronavirus in the James Brady Press Briefing Room of the White House in Washington. First, it was the media that was at fault. Then, Democratic governors came under fire. China, President Barack Obama and federal watchdogs have all had a turn in the crosshairs. And now it’s the World Health Organization that's to blame. (AP Photo/Alex Brandon)

NEW YORK (AP) — First, it was the media that was at fault. Then, Democratic governors came under fire. China, President Barack Obama and federal watchdogs have all had a turn in the crosshairs. And now it’s the World Health Organization that's to blame.

President Donald Trump is falling back on a familiar political strategy as he grapples with the coronavirus pandemic: deflect, deny and direct blame elsewhere.

As he tries to distance his White House from the mounting death toll, Trump has cycled through a long list of possible scapegoats in an attempt to distract from what critics say were his own administration’s missteps in slowing the spread of the coronavirus on American shores.

The strategy relies on validation from supportive media personalities and Republicans, evoking White House tactics during other challenging times for Trump’s presidency. The effort is taking on more urgency during a once-in-a-century health crisis playing out just seven months before voters go to the polls.

The list of those Trump has blamed is lengthy, and shifting:

Democratic governors for alleged mismanagement at the front lines of the crisis. The media, first for hyping the threat of the virus and then for not giving the administration credit for its response. Federal inspectors general, believed to be conspiring to make the White House look bad. The Obama administration, for not adequately preparing. China, initially absolved of responsibility, then accused of covering up worrisome health data. And now the WHO, from which Trump has threatened to withhold funding.

Trump himself owns up to no mistakes.

Last month, as the nation began to lock down, Trump declared “I don’t take responsibility at all” for a lack of testing. And when asked this week if he would have responded to the crisis differently had he seen a January memo from a senior adviser warning about the potential severity of the virus outbreak in the U.S., the Republican president was blunt.

“I couldn’t have done it any better,” he said.

In the face of extraordinary electoral headwinds, finding fault elsewhere has become the directive for the president’s allies, according to four White House officials and Republicans close to the White House. They spoke on the condition of anonymity because they were not authorized to speak publicly about private conversations.

Trump’s attacks on foils from Michigan Gov. Gretchen Whitmer to Chinese health officials have been amplified by Cabinet members, his campaign apparatus and congressional Republicans.

With one eye firmly on his November reelection prospects, Trump at times has bristled against tough public health recommendations and has urged a rapid restart to the nation's economy. He has tried to drown out Joe Biden, the presumptive Democratic presidential nominee, and has attempted to blame the former vice president for bureaucratic failures.

Trump has transformed the daily White House coronavirus task force briefing into a substitute for his canceled rallies, treating the James S. Brady briefing room like a stage in Ohio, Florida or Wisconsin. He has sparred with reporters, mangled facts and, at times, distanced himself from the advice of his own public health team.

There is no “The buck stops here,” like the sign once found on President Harry S. Truman’s desk.

“George H.W. Bush used to say that no one wants to hear the president of the United States say, ‘Oh, woe is me.’ And yet Trump is betting on the reverse,” presidential historian Jon Meacham said. ”Since ancient times, leadership has been about wearing a mask of command. Trump is the opposite — a bundle of insecurities, neediness and wants.”

Trump allies point to the president's actions — such as suspending direct flights with China and, later, Europe — as measures that kept the nation safe and said that his brashness and sense of urgency have improved the response by both the government and the private sector.

“A big part of the reason why President Trump was elected was to be that bull in the china shop, to take those brash, declarative actions," said Jason Miller, Trump's 2016 campaign communications director. “He was elected because we are a ‘right now' society, and he will be rewarded by voters for doing whatever it takes to keep people safe."

But from the pandemic’s first days, Trump has tried to create some daylight between the White House and the front lines of the pandemic. His administration put the onus on states to battle the crisis, declaring that the federal government — and the national stockpile of emergency medical supplies — was simply a “backstop” to the states’ efforts.

Trump was initially reluctant to invoke the Defense Production Act, which shifts more power to Washington to push the private sector to manufacture critically needed supplies.

Trump initially was loath to criticize China, a valued trading partner, but shifted gears with an eye toward firing up his nationalist supporters, using the inflammatory term “the Chinese virus” to describe the novel coronavirus while accusing Beijing of not being transparent with its health data. This week, he took aim at a new target, the World Health Organization, accusing it of “missing the call” on the virus.

And, as he often does, Trump has leveled many of his broadsides at the media, attacking news organizations and individual reporters alike in an effort to boost his base supporters and cast doubt on the integrity of the reporting as bad headlines pile up.

Trump has used this playbook before.

Trump most notably dug in after he was accused of pressuring a foreign leader to investigate a political foe, a matter that led to his impeachment. Throughout the impeachment drama, Trump insisted his July 2019 conversation with Ukraine’s president that was at the heart of the matter was “perfect."