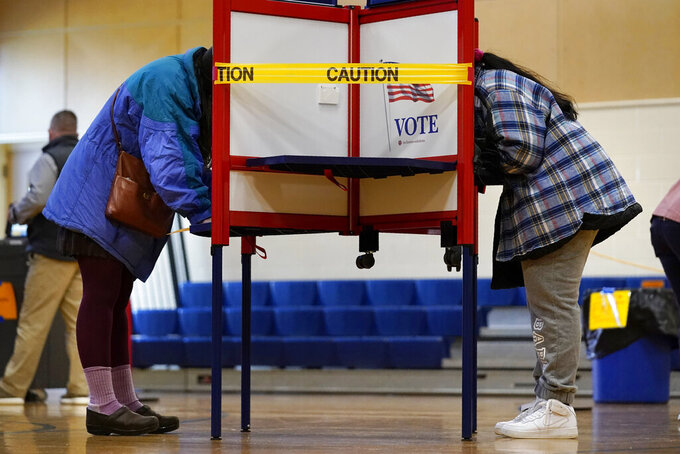 FILE - In this Nov. 3, 2020, file photo, caution tape closes off a voting stall to help distance voters to help prevent the spread of the coronavirus during election day at the East End School in Portland, Maine. In that election, Maine became the the first state to use ranked choice voting in a presidential contest. (AP Photo/Robert F. Bukaty, File)

PORTLAND, Maine (AP) — A virus that started in China and swept around the world to Maine, infecting more than 19,000, killing more than 300 and crippling the economy, was voted the unanimous top story of 2020 by The Associated Press.

The Maine Legislature adjourned, the governor imposed emergency orders and nonessential businesses closed before the economy gradually began reopening. But a wave of infections in the fall created an even more dangerous surge with daily infections climbing to all-time highs near the end of the year.

The selection of the top story that impacted life of every Mainer from Fort Kent to Kittery was made by the AP and its member news organizations in the state.

The No. 2 story was Republican Sen. Susan Collins' tough reelection fight in an ugly campaign that featured astonishing levels of spending, which reached about $200 million by the candidates, their allies and outside groups.

The No. 3 story was a labor dispute at Bath Iron Works that boiled over into a two-month strike by workers in the middle of the pandemic.

Machinists Local S6 got most of what it wanted when it came to work rules and keeping the status quo for the hiring of subcontractors. The company got streamlined rules for hiring subcontracting and a commitment to work together to get back on track.

Here are the other top stories:

4. Maine became the first state to use ranked choice voting in a presidential contest. The system lets voters rank all candidates in order of preference, and then uses last-place candidate eliminations and additional tabulations to ensure a majority winner. The system already was used in U.S. House and Senate races.

5 (tie). Maine became the 10th state to allow people to legally buy marijuana for recreational use when stores opened in October. It was a long process to get there. A referendum was approved in November 2016, but the effort to set up a method for legally purchasing cannabis dragged on through two legislative rewrites, two vetoes by the former governor and a change in administrations.

5 (tie). Central Maine Power was poised to begin construction of a 145-mile (230-kilometer) power transmission line to serve as a conduit for Canadian hydropower even as litigation continued. Three conservation groups sued to force the Army Corps of Engineers to conduct a more thorough environmental review. The project would allow up to 1,200 megawatts of hydropower to reach the New England grid.

7. Mainers voted to keep a state law that restricts exemptions on childhood vaccinations. Every major medical organization in Maine supported the law that eliminated religious and philosophical exemptions at a time when more parents are forgoing vaccines for their children. Groups seeking to restore the exemptions contended parents should be responsible for making medical decisions for children.

8 (tie). Republican President Donald Trump managed to peel away one of Maine's four electoral votes for himself in November, just as he did four years earlier. Trump won a majority of votes in the 2nd Congressional District even though Democratic President-elect Joe Biden won the other districts and the statewide vote. Those are the only two times the state has divided its electoral votes.

8 (tie). Trump directed the U.S. Department of Agriculture to provide lobster fishermen with financial assistance to make up for lost income from a trade war he started, then brokered a new deal in which China agreed to start buying U.S. lobster again. Many in the lobster industry said they were hoping for stability when Biden takes office in January.

10. A swimmer was killed by a great white shark in a terrifying attack just 30 to 40 feet (9 to 12 meters) off the coast of Harpswell. It was the first recorded shark fatality in Maine history, and only the second unprovoked attack by a shark in Maine waters. Great whites aren’t common in Maine but healthy seal populations appear to be drawing the big fish farther northward.