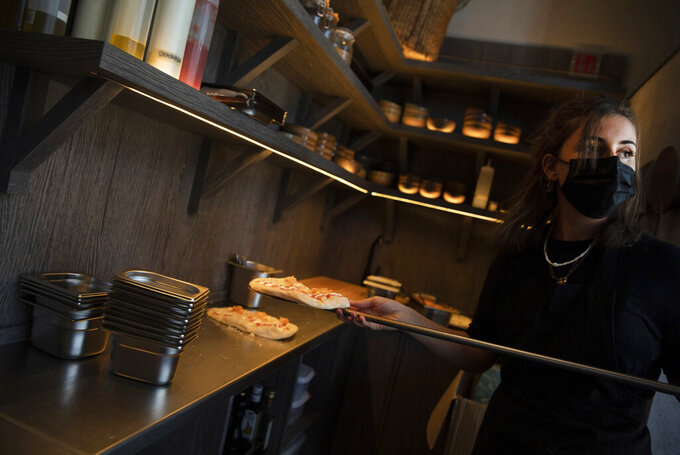 A member of staff prepares to put a pizzette into an oven as she prepares take-away orders at Sergio Herman's Le Pristine restaurant in Antwerp, Belgium, Friday, Nov. 6, 2020. Of all the many challenges the pandemic throws up for all kinds of professions, this one has been particularly tough: How to put a three-star chef into a takeout box. (AP Photo/Virginia Mayo)

ANTWERP, Belgium (AP) — Necessity is supposed to be the mother of invention. If that were the case for the high-end restaurant industry, the coronavirus pandemic should have offered ample opportunities for creativity and renewal.

Instead, it is turning into a bitter struggle for survival.

Many a three-star Michelin meal has been put into a takeout box and sent out on Deliveroo scooters, as renowned chefs in Belgium and elsewhere try to scrape through a second pandemic lockdown that is likely to threaten even the lucrative Christmas season.

Sergio Herman, who has run three-star, two-star and many other establishments that have wowed the Michelin powers and the most refined palates around the world, doesn't really see any positives to come out of working against and around the pandemic.

"Sometimes you feel that whatever you built up over the years is slipping like sand through your fingers. It gives you this kind of fear," he told The Associated Press.

Across much of Europe, still the apex of the finest dining in the world, exclusive restaurants have lost the precious appeal of the luxury dining experience — from the moment of taking your coat at the door, to eating several inventive courses with the finest silverware, to basking in sommelier tastings, to savoring the after-dinner sweet and having that little extra chat with the chef.

“All that cannot just be replaced by a box and a plastic tray. That is just impossible," Herman said amid the whirl of his new restaurant, Le Pristine, in the Belgian port of Antwerp, where he mixes the terroir of his native Dutch Zeeland with an Italian approach.

Throughout much of history, religious strictures forced cooks to think outside the box and still produce sterling cuisine despite the limits. Poverty also imposed challenges, and in Italy the creativity to do so much with so little even created its own style — Cucina Povera.

But this pandemic so far mainly has chefs just thinking of how to get through each day.

On a recent day, a man in a face mask was folding pizza boxes and tables were precariously stacked with other takeout material and rolls of labels. On the wall, a list was pasted with addresses and dates of delivery. A box from Le Pristine, without drinks but with a few supplements, can easily push past 100 euros (around $115) a head.

A frenetic energy emerged from its kitchen as his team was trying get around 600 dinner boxes ready by the next day. They held anything from turbot to sea buckthorn, from artichokes to Zeeland mussels.

If there is one thing that defines restaurant owners and staff around the world, it's their drive, energy and a zest for survival. They more than need that now.

In the Michelin three-star restaurant De Librije, to the north in the Netherlands, chef Jonnie Boer has been offering online classes so people at home can get as close as possible to one of his three-course dinners. A “Librije's Atelier in your Kitchen” online session goes for 140 euros ($165).

“This way, you can dine in De Librije, cozily in your own living room," a restaurant statement said, though some might take exception to such a claim for at-home cooks.

Clare Smyth of the two-star establishment Core by Clare Smyth in London said, with the lockdown takeouts and other initiatives, “people really wanted a bit of our restaurants in their own home." In the end though, “it will never replace coming to a restaurant" for the overall experience of near-perfect cooking and hospitality, she said in a discussion organized by The World's 50 Best Restaurants.

One thing unites every side of the debate though — the daily quest to amass even some of the income they lost when their sellout dining rooms had to be suddenly closed or forced into reduced service.

Even if detailed statistics aren't yet available, the 27-nation European Union saw a precipitous drop of 79.3% in hotel and restaurant activity between February and April in the spring COVID-19 lockdowns. Even though business bounced back over summer, the resurgence of the virus with new lockdowns across Europe this fall amounts to a double blow.

The grapevine has told Herman about a world of pain still to come.

“There will be a lot of hits coming. It will leave its mark," he said. "A serious amount of companies have already closed and many more will follow."

He said the industry's top echelon was especially vulnerable because of its high overhead. He welcomed government measures in much of Europe that were shielding restaurants up to a point and gave staff temporary unemployment pay. But that can only do so much.

“Bills continue to come in," Herman said, adding that “costs are much higher than at other restaurants, so it can go real fast — that bank account."

Herman is now involved in eight restaurants, including two two-stars and another one-star eatery. Le Pristine is his latest project.

“Our companies are all healthy, but, hey, you can see that you can get a hit," he said.

Little wonder he will never look kindly on a virus and certainly not as any lesson to be learned.

“The takeout, the boxes. It didn't really make me any wiser," Herman said. “I hope we can get back to normal as soon as possible.”