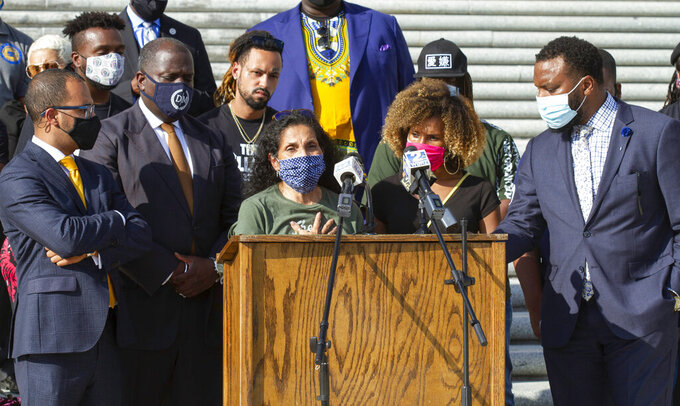 FILE - In this Oct. 7, 2020, file photo, Mona Hardin, center left at podium, mother of Ronald Greene, speaks at a news conference outside the Louisiana State Capitol in Baton Rouge, La. Greene died following a police chase in Louisiana in 2019, and his death is now under federal investigation. Greene's family filed a federal wrongful-death lawsuit in May alleging troopers "brutalized" Greene, used a stun gun on him three times and "left him beaten, bloodied and in cardiac arrest," before covering up his actual cause of death. (AP Photo/Dorthy Ray, File)

NEW ORLEANS (AP) — Louisiana, like the rest of the country, was hit hard in 2020 by the COVID-19 pandemic. It also was pummeled by hurricane after hurricane and faced a variety of accusations of racial injustice.

The new coronavirus infected more than one in 20 Louisiana residents, killing 6,400-plus - more than one of every 1,000 people in the state. The COVID-19 pandemic disrupted the economy, including oil, tourism and seafood. Outbreaks sickened people at crawfish farms and in prisons and nursing homes; schools closed. Those flouting emergency public health orders included a minister and his congregation. Deaths from the disease or its complications included those of jazz great Ellis Marsalis and the 2007 Zulu king.Christmas Eve bonfires were canceled. So were New Orleans’ 2021 Carnival and Mardi Gras parades.

Five named storms hit Louisiana during a record-smashing Atlantic hurricane season. Laura was the worst, killing at least 27 people and destroying homes and businesses in a vast swath of the state after making landfall Aug. 27. It was followed seven weeks later by Delta. The others were Tropical Storms Cristobal and Marco, and Hurricane Zeta.

Louisiana’s congressional delegation got a post-election shakeup when President-elect Joe Biden chose U.S. Rep. Cedric Richmond, just reelected to a sixth term in his New Orleans-based seat, as a White House adviser. Richmond is the only Democrat and the only African American in the delegation. An election to fill his seat is expected early in 2021. There weren’t any surprises in the elections themselves, with the state’s eight electoral votes going to President Donald Trump and the state’s congressional party makeup remaining the same. Republican U.S. Sen. Bill Cassidy and all five House incumbents - four Republicans and Richmond - won reelection. Luke Letlow won a northeast Louisiana runoff between conservative Republicans for the seat of retiring Republican Rep. Ralph Abraham. Voters in all of Louisiana’s major metro areas and nearly all of its parishes approved sports betting. Five constitutional amendments, including one stating that the constitution will not include a right to abortion, were approved. Three rejected amendments included one that could have let manufacturers negotiate with local governments to make payments instead of property taxes.

The Catholic Archdiocese of New Orleans filed for bankruptcy, partly because of growing legal costs related to sexual abuse by priests. The bankruptcy also froze a court fight over confidential emails that attorneys for men suing the church say show the New Orleans Saints helped to shape the archdiocese’s list of credibly accused clergy. Team officials said any suggestion that they helped cover up crimes is outrageous.

The coronavirus pandemic disrupted and disordered legislative work, like everything else - and was the focus of much of it. Republican lawmakers battled with Democratic Gov. John Bel Edwards about his virus emergency orders and business restrictions. Edwards vetoed 11 of 71 bills passed during a special session to debate coronavirus issues. House Republicans are appealing a judge’s ruling that another challenge to his emergency powers was unconstitutional. Lawmakers had a shortened regular session because of the pandemic and wrapped up their budget work in a special session. Then they called the coronavirus session. The special sessions were only the second and third to be convened by lawmakers rather than the governor.

Ten months after part of the top stories of a hotel under construction collapsed in New Orleans, crews recovered the bodies of two construction workers from the wreckage. Shortly afterward, the city of New Orleans sued the hotel’s owners for $12 million spent because of the collapse on Oct. 12, 2019. In April, the Occupational Safety and Health Administration cited 11 companies for safety and health violations.

Gov. John Bel Edwards created a task force to respond to climate change and set a state goal of net zero greenhouse gases by 2050. The goal is unique for a state where fossil fuels drive the economy, said Natalie Snider of the Environmental Defense Fund. Work to protect and restore the coast included starting an $80 million floodgate and expanding a severely eroded island where thousands of pelicans and other seabirds nested to seven times its size. The Coastal Protection and Restoration Authority also won approval of hundreds of millions of dollars of BP oil spill money for coastal work.

A private prison in northeast Louisiana agreed to pay $177,000 to settle a lawsuit brought by five former inmates whose faces were pepper-sprayed while they were handcuffed and kneeling in 2016. Five former guards had pleaded guilty in 2019 to conspiracy charges.

Louisiana mourned notables including Murphy J. “Mike” Foster, who served two terms as governor in the 1990s, former New Orleans Saints kicker Tom Dempsey, and Shreveport minister Ron Hampton, who livestreamed a message of courage and hope from his deathbed days before COVID-19 killed him. Foster, a popular millionaire businessman who got major changes in education policy and lawsuit rules through the Legislature, was 90. Dempsey, whose 63-yard field goal stood as an NFL record for 43 years, was 73. Hampton, known in Shreveport for inner-city ministry, was 64. Jazz pianist and teacher Marsalis, whose six sons included four other jazz greats, was 85 when he died of pneumonia brought on by the coronavirus. Larry Arthur Hammond, the Zulu parade group king, was 70. Others who died in 2020 included civil rights activist Dr. Harry Blake of Shreveport, 85; Lucille Bridges, 86, who enrolled her 6-year-old daughter Ruby Bridges as the first Black student at a New Orleans elementary school and walked the child past crowds screaming racist slurs; pianist Ronnie Kole, 89, who performed for six U.S. presidents and across the globe; and Pulitzer Prize-wining novelist Shirley Ann Grau, 91.