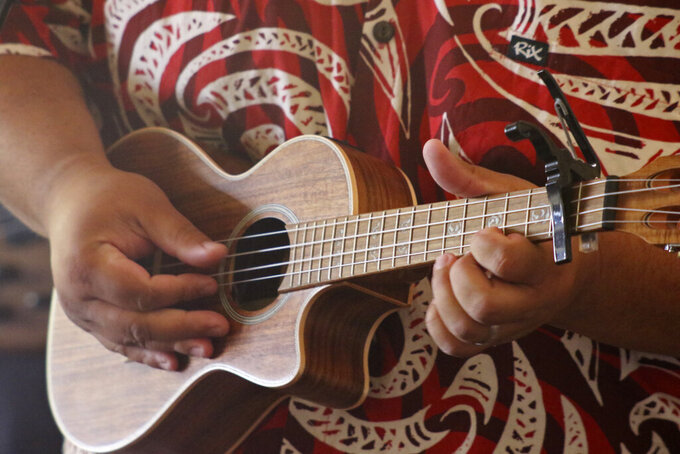 This May 5, 2020, photo shows Lance Chang playing a ukulele during a livestream performance of his family's band, Kanilau, from the living room of his father Roland Chang's home in Honolulu. The coronavirus pandemic has taken out large sections of Hawaii's tourism-based economy, including the Chang family's turtle and dolphin snorkel tour business and their regular music gig in Waikiki. (AP Photo/Audrey McAvoy)

HONOLULU (AP) — The coronavirus pandemic has been particularly brutal to the tourism-dependent economies of Nevada and Hawaii, lifting the unemployment rate in both states to about one-quarter of the workforce.

Nevada topped the nation with an April unemployment rate of 28.2%, the worst any state has seen since the national jobless rate was estimated at 25% in 1933 during the depths of the Great Depression, state officials said Friday.

“They are sobering numbers, far in excess of anything we have experienced as a state before now,” said David Schmidt, chief economist for the Nevada Department of Employment, Training and Rehabilitation.

Michigan came in second with 22.7% and Hawaii third with 22.3% In Michigan, job losses were spread across all sectors, with especially large losses in hospitality and manufacturing.

Nationally, the job market and the economy have fallen into their worst crisis in decades. More than 2.4 million people applied for unemployment benefits last week in the latest wave of layoffs from the viral outbreak that triggered widespread business shutdowns two months ago.

All told, nearly 39 million people have filed for jobless aid since the coronavirus forced millions of businesses to close their doors and shrink their workforces. The stream of layoffs reflects an economy gripped by the deepest recession since the Great Depression. The national jobless rate stood at 14.7%

In Nevada, both casinos and other non-essential businesses have been closed since mid-March.

In Hawaii, most hotels shut down in late March as the state began requiring all travelers arriving in the state to observe 14 days of quarantine. Restaurants switched to take-out only and retailers closed their doors to comply with social distancing requirements imposed to curb the spread of the virus.

Grayden Ha‘i-Kelly’s family on the Kona Coast of Hawaii's Big Island is among those grappling with sudden unemployment. Both he and his wife work for hotels that temporarily closed during the last week of March.

Ha‘i-Kelly has been using up vacation time since and was getting paid through last week.

Ha‘i-Kelly said the pandemic has taught his family some life lessons, like slowing down more in life, strengthening the family and taking care of others. One thing they have been doing is waking up at 5 a.m. three times a week to go to a local eatery to help prepare food for those in need.

“These are some of the lessons I’ve been trying to teach my children. This is how we grew up. Things weren’t always easy,” he said.

The unemployment rate was relatively low before the pandemic in all top three states, underscoring the dramatic shift in fortunes for their workers.

And though the number of jobless surged across the nation, some states fared much better. Connecticut had the lowest unemployment rate in the nation at 7.9%, followed by Minnesota at 8.1% and Nebraska at 8.3%