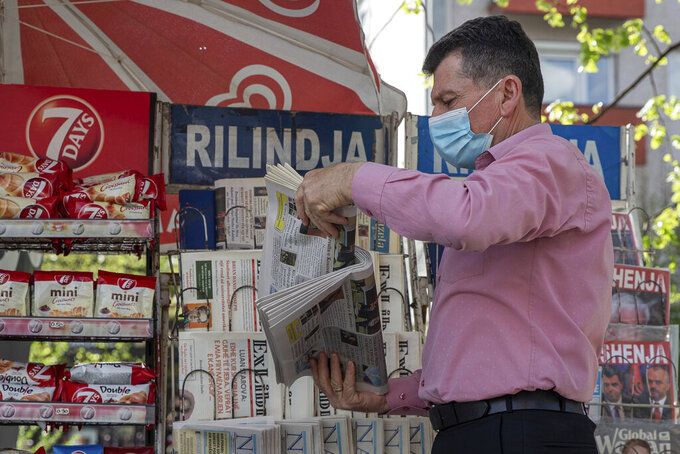 Vendor Ibrahim Gashi, arranges weekly and monthly magazines at his newspaper kiosk were he has been selling newspapers downtown for 35 consecutive years except one, in the capital Pristina, Thursday, April 29, 2021. The printing presses stopped running at the start of the pandemic in Kosovo. The country's five dailies all stopped printing physical newspapers and turned into online media portals. But these do not reach all the people as before, and many fear they prioritise speed over accuracy. (AP Photo/Visar Kryeziu)

Azem Qerkini, an accountant and newspaper collector, misses the time when he went to Skopje, the capital of neighboring North Macedonia, in search of a copy he needed.

Imer Mushkolaj, a journalist, dreams of once more drinking his morning coffee while flipping through the daily papers.

Until March last year Kosovo had five daily newspapers, though they all had small circulations. One of them, Koha, sold about 10,000 copies a day at times when the news was most interesting.

Since the start of the pandemic, there have been no more newspapers physically printed in Kosovo, only online versions. The pandemic was "the final straw, unfortunately turning Kosovo into the only country in Europe, maybe wider, without a daily paper,” said Mushkolaj.

Agron Bajrami, editor-in-chief of Koha Ditore, would like to get back to printing. “Many, probably more older-generation people still would like to read the newspaper physically, to touch it as a paper,” he says. "But at this moment, it’s not possible economically.”

Online newspapers are a different business model, however, that has tested Koha Ditore. The newspaper is facing an uphill struggle trying “to educate the people that they need to contribute by paying for the news that they get," Bajrami says.

It was the lockdown that brought an end to printing. For months, people were stuck at home, unable to go into the streets in search of news, and advertising accordingly reduced. People turned to smartphones and TVs.

Newspapers had to focus on training journalists for the online media.

“The technology has made many newspapers, formerly traditional newspapers, try to behave as if they were broadcasting live,” says Bajrami. He added: “It comes with a cost, a huge cost to professional standards.”

Very often, online portals pay more attention to the speed of the news rather than its accuracy, according to Mushkolaj who heads the Print Media Council association.

People, especially older ones, find it harder to distinguish a real story from fake news, he said.

“Older generations are deprived of their primary source of information ... and entertainment,” says Mushkolaj.

Qerkini, the collector, believes that younger generations in Kosovo are not learning their young country’s history well because of the lack of print newspapers.

Kosovo declared independence from Serbia in 2008, a decade after a brutal 1998-1999 war between separatist ethnic Albanian rebels and Serb forces. The war ended after a 78-day NATO air campaign that drove Serb troops out, and a peacekeeping force moved in. Most Western nations have recognized Kosovo’s sovereignty, but not Serbia and its allies Russia and China.

“The book, the newspaper cannot be replaced by anything, be that a computer, the internet, Facebook, Twitter or any technological program,” said Qerkini.

“Kosovo has stopped writing its early history and unfortunately there is no longer a written history — at least for a year,” adds Mushkolaj.

Without government support — which is unlikely to be forthcoming in these hard times — it is hard see how the newspapers can start printing again.

As for Gashi, the newspaper seller, even though he hasn't had anything to sell for more than a year now, people are still coming to him to find out if he has any news — on when the printing presses might start rolling again.