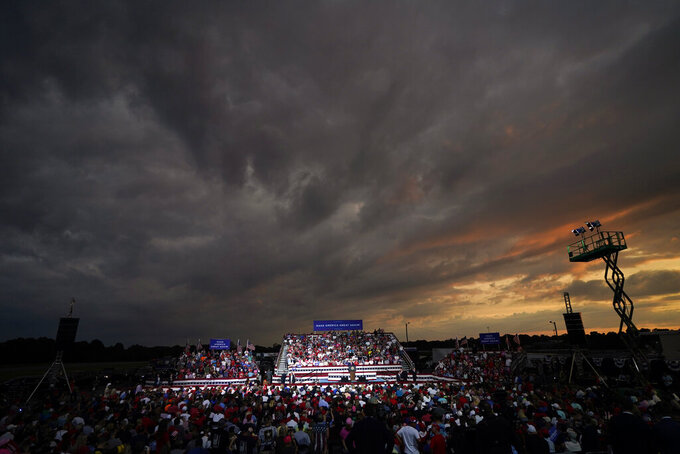 FILE - In this Sept. 8, 2020, file photo President Donald Trump speaks at a campaign rally in Winston-Salem, N.C. The evolving portrait of suburban life in one of the nation's most consequential swing states suggests that Trump's push to inject new dynamics into the final weeks of the 2020 election is being overshadowed by the frightening realities of everyday life in the pandemic. (AP Photo/Chris Carlson, File)

WINSTON-SALEM, N.C. (AP) — President Donald Trump is fighting to fill a Supreme Court vacancy, howling with unsubstantiated claims of voter fraud and warning that violent mobs are infiltrating the suburbs.

But on a recent morning along Arbor Street, a peaceful tree-lined road with stately brick Colonials and Tudors near Winston-Salem, the women who are the targets of Trump's messages were confronting much more tangible threats.

As conservative activists canvassed the neighborhood, one young mother, a baby in her arms, shouted through a closed window that she was in quarantine. Across the street, another was focused on teaching her children their daily lessons at the kitchen table.

And a few doors down, 49-year-old Christina Donnell, an independent who voted for Trump four years ago, said through a black face mask that Trump's “terrible” handling of the pandemic and divisive leadership more broadly are her chief concerns.

“It’s embarrassing to the country," Donnell, a lawyer who previously lived in Washington, said of Trump's leadership. “He’s an embarrassing role model.”

In one of the nation's most consequential swing states, Trump's push to inject new dynamics into the final weeks of the 2020 election is being overshadowed by the frightening realities of everyday life during a pandemic. Trump and his allies hope the escalating Supreme Court nomination fight will help unify a fractured Republican Party that has lost its grip on college-educated suburban voters, particularly white women.

But for many, the coronavirus and the related economic challenges are much more pressing issues.

Trump's challenge is acute here in North Carolina, a state that his senior aides describe as a “must-win." A loss in the state, which Democrats have carried only once at the presidential level in the last 30 years, would make Trump's path to a second term incredibly difficult and signal dire challenges elsewhere on the electoral map.

Public polling, backed by private discussions with strategists from both Trump's and Democrat Joe Biden's campaigns, indicate that North Carolina remains a true tossup five weeks before Election Day. And lest there be any doubt about Trump's concerns about his standing here, he has traveled to North Carolina every week for the last five weeks, second only to Pennsylvania.

Trump's standing will also help decide races for governor and senator, a set of competitive contests that has drawn more political advertising dollars to North Carolina than any other state in the nation. More than $246 million has been spent or reserved to communicate with North Carolina voters online and on television about the presidential and Senate contests so far, according to the media tracking firm Kantar-CMAG. Florida follows with $236 million and then Arizona with $223 million.

The president's daughter-in-law, Lara Trump, a North Carolina native, led a Women for Trump event in the rural eastern part of the state last week to help energize the president's base. She was scheduled to visit again on Monday.

"This is a must-win state for whoever is to become the next president," Lara Trump said in an interview.

She said the Supreme Court debate might help motivate each side's base, including some “fence sitters” who may not have voted at all. But she pointed to a more serious concern for suburban women.

“As far as suburban women are concerned, they want safety and security. They've seen what has happened to so many of our Democrat-run cities across America," Lara Trump said. "It is absolutely frightening to see the chaos, the destruction, the violence.”

After her comments, she led an event for roughly 200 people in which the pandemic was not mentioned at all on stage or by several voters who asked questions. The Supreme Court came up only once. The conversation was far more focused on the prospect of voter fraud, an issue President Trump has raised repeatedly as polls show him trailing, though experts report there is no significant evidence of such fraud.

As in other swing states, Democrats' closing message has been focused on health care, especially the Trump administration's ongoing court fight to overturn former President Barack Obama's health care law and the protections for those with preexisting conditions that are part of it.

Biden's team has largely relied on advertising to communicate its message, however, because the candidate himself has not been a regular presence in North Carolina — or anywhere — during the pandemic. Biden made his first trip as the Democratic nominee to the state last week. His running mate, Kamala Harris, is scheduled to make her first appearance on Monday at a Raleigh event focused on health care.

“He needs to pick up his game some,” said former North Carolina Gov. Jim Hunt, a Biden ally, calling on Biden's campaign to intensify in-person canvassing. Hunt said the election is “as tight as a tick.”

North Carolina is a glaring example of the deepening divisions that have defined U.S. politics in the Trump era.

Obama in 2008 was the only Democrat to carry the state after 1976, but it continues to trend a bluer shade of purple thanks to an influx of college-educated Northern transplants who have packed into North Carolina's urban and suburban areas, especially around Charlotte and Raleigh. Those booming regions are voting more and more Democratic while the state's more rural areas are voting more and more Republican.

It is truly a case of two North Carolinas in which voters are focused on completely different sets of issues, said Morgan Jackson, a leading Democratic strategist who is working on the state's gubernatorial and Senate races.

The swing voters in the suburbs swung from Obama in 2008 to Trump in 2016 and are threatening to swing to Biden because of the pandemic.

“When you think about the issue set they’re focused on, their lives are still centered around COVID,” Jackson said, noting that many have school- or college-aged children whose lives have been transformed by the pandemic several months after it first exploded in the United States.

Biden's team privately believes it has already won the suburbs, while those close to Trump's campaign are hopeful that the Supreme Court fight might shift voters' attention away from the pandemic, especially as the confirmation fight intensifies over the coming weeks. Trump nominated federal judge Amy Coney Barrett to fill Ruth Bader Ginsburg's vacancy over the weekend. Republicans hope to finalize the confirmation before the Nov. 3 election.

The final-weeks drama is making life difficult for conservative leaders like Chris McCoy, a senior adviser for the group Americans for Prosperity Action, which has spent months reaching out to suburban swing voters to help North Carolina Republican Sen. Thom Tillis win a second term.

"This has been one of the more grueling canvassing efforts I’ve ever been part of," said McCoy, a veteran of North Carolina politics. “It’s really touchy out there. We have good days and bad days.”

Back on Arbor Street, there were more lawn signs expressing support for Black Lives Matter than Trump.

Donnell explained that she voted for Trump four years earlier because she thought he would be better on the economy and taxes. But two years into his presidency, she was so appalled by his behavior that she left the Republican Party and became an independent.

Still, she's not sure how she'll vote in November. She's “not a fan” of Biden, either.

The Supreme Court may influence her vote, but not in the way Trump hoped.

“I would hate to see the court become ultra-conservative. I'm a lawyer. That's a big issue for me. ... I'm worried that women's rights might disappear,” Donnell said. “That's what would sway me toward Biden.”