The pandemic ruined one musical's debut plans. Not for long 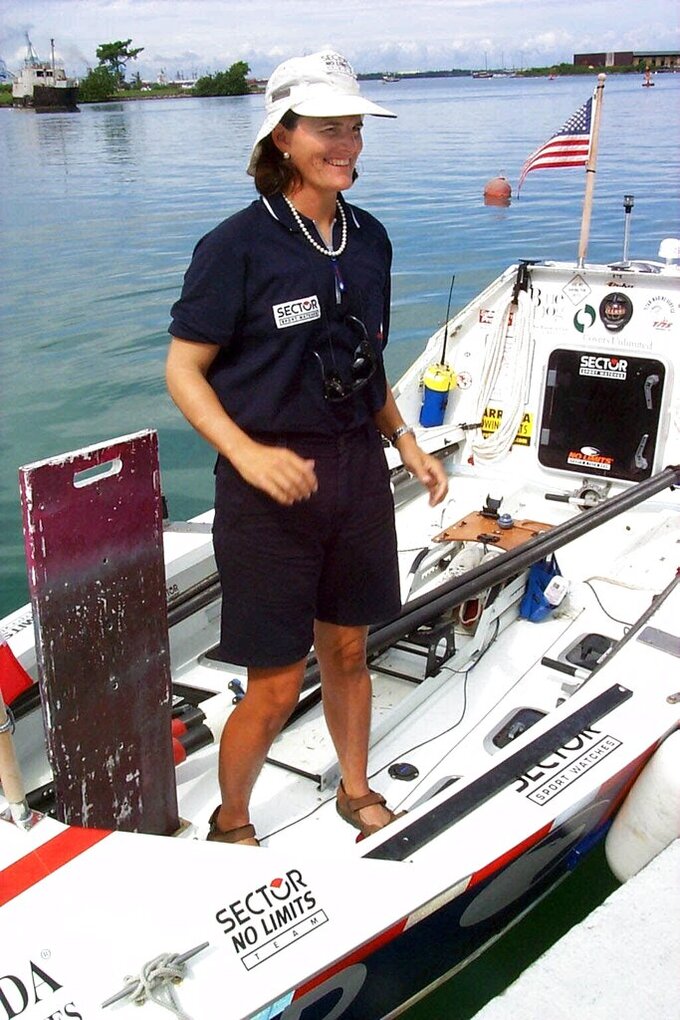 FILE - Rower Tori Murden appears aboard her 23-foot, American Pearl, in Bas-du-Fort in Guadeloupe on Dec. 3, 1999. A musical about Murden, who was the first American to row across the Atlantic Ocean solo, was supposed to make its stage debut at the Williamstown Theatre Festival in Massachusetts in the summer 2020. But due to the global pandemic, it is instead making its world premiere this month as a recording available on Audible. (AP Photo/John Riley, File)

NEW YORK (AP) — Huge waves couldn't stop Tori Murden McClure from becoming the first American to row across the Atlantic Ocean solo in 1999. So it's only fitting that a global pandemic couldn't stop a musical about her feat from making it to audiences — just not the way it was originally intended.

“Row,” which was scheduled to make its stage debut at the Williamstown Theatre Festival in Massachusetts in the summer 2020, is instead making its world premiere this month as a recording available on Audible.

“This whole process has been like a slow blossoming,” said Dawn Landes, who wrote the songs and lyrics. “It’s really become a completely unique piece of art, which I never really could have even imagined.”

When “Row” is released Thursday, it becomes a rare work — a world premiere musical that’s never first had any sort of stage production. Without visuals, the team had to create space and time with audio cues.

“The amount of work and back and forth and technical things that you have to deal with to make a new musical in this medium is exponentially more than when you’re in the room and can just try stuff,” said book writer Daniel Goldstein.

To complicate matters, all 10 actors and 9 musicians were never in the same room together due to COVID-19 restrictions. And none of the music had been recorded prior to lockdown.

Never more than three actors were allowed at a time in Audible's Manhattan studio to record their parts and each was in isolation booths, listening to each other on headphones. An engineer, music director Mary-Mitchell Campbell and director Tyne Rafaeli were also on site.

The musicians — apart from a string quartet that had podded together during the pandemic — were remote and had their parts mixed into the final product. Rehearsals were done by Zoom. Even the writers were remote.

“You couldn’t dream this up: a show that’s about isolation, having each person involved on the team being in actual isolation while working on it," said Landes.

Because of the fear of virus transmission, the actors were given each day's script pages wrapped in plastic and weren't allowed to bring them back the next day. A car service ferried them home for lunch so they didn't have to go to a restaurant and risk infection.

“Row” is the festival's final offering this season and represents the first ever traditional book musical for the world’s largest producer of audiobooks and spoken-word entertainment.

“We just sort of went into it in that spirit of like, ‘Yeah, why not? We’ll figure it out,’” said Kate Navin, executive producer at Theater Audible. “We’re going to do more musicals. So I kind of figure they can only be easier from here on out.”

When the pandemic threatened the festival’s summer offerings, Williamstown Theatre Festival's Artistic Director Mandy Greenfield reached out to Navin with an ambitious request: Would they record their entire seven-show season — six plays and “Row”? Navin had already been mulling how Audible could fill the gap and agreed to push off into the unknown.

“If you ossify, you die,” said Greenfield. “It goes back to the story of ‘Row’ — it reminds you of the resilience and the singular power of the human spirit to persevere.”

The musical frames rowing across the ocean as McClure's attempt to face — and defeat — helplessness. One of her brothers, Lamar, was learning-disabled, and Tori was his protector growing up, always defending him from bullies.

During her sea journey, McClure — played by Grace McLean — reads “Moby Dick” and quotes from F. Scott Fitzgerald and Aristotle. She communes with the spirit of Amelia Earhart and listeners learn of her life though flashbacks.

Other actors play Lamar, journalists and friends, as well as her husband-to-be, Mac McClure. There's even an appearance from the iconic Muhammad Ali, who inspired McClure. Throughout is the sound of water, seabirds and oars pulling through the ocean

“Sound design becomes a much more important part of the story because we have to make sure we always understand when she’s in the boat and when she’s having flashbacks and memories that are filling in the story,” said Navin.

The creators had already scheduled and cast the musical, building up so much momentum that they searched for a way to continue despite the pandemic. If they could, it meant actors and musicians could be paid and art could be made.

“It gave me a community during that time and I really clung to it. It was sort of a life raft for me,” said Landes. “I was just so happy to have something to hope for and something to do.”

Landes estimates she's written 35 songs for the show — originally conceived eight years ago — over the years. The final mix thrillingly veers from folk to choral, power ballads and anthems.

The story of “Row” isn't finished. The Williamstown Theatre Festival plans to stage it in front of an audience this summer — outdoors and across the street from the venue where it was to debut the year before.

“We will have to pull it back apart and figure out how to embrace the visual once again,” said Greenfield. “I think a lot of the choices we made for it in audio were really specifically engineered.”

And if the skies darken on show nights, so be it. The musical has endured worse. “Keep throwing it at us,” said Landes, laughing. “The whole thing happens outside anyway. What else you got? Drenching rain? We’re going to use that.”