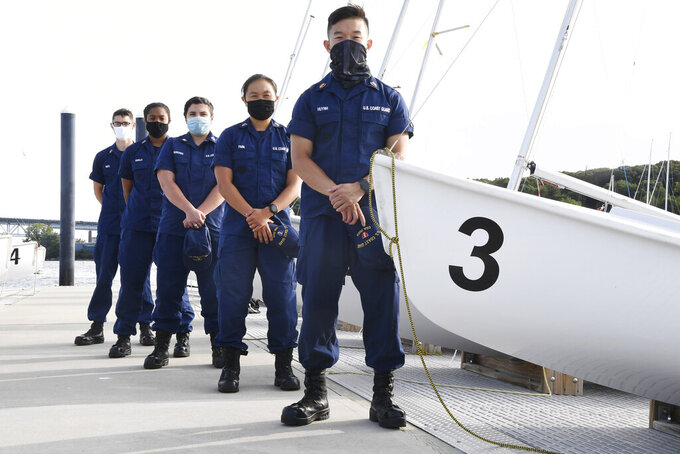 In this Monday Sept. 14, 2020 photo, From back left, Coast Guard Academy Cadets Henry Smith, Branyelle Carillo, Mia Haskovec, Jordan Park, and Tyler Huynh, pose for a photograph at the Seamanship Sailing Center at the United State Coast Guard Academy in New London, Conn. A group of Coast Guard cadets spent part of their summer filling in on a critical national security mission after a case of COVID-19 sidelined crew members on a cutter being sent to patrol the US-Russia border. (AP Photo/Jessica Hill)

NEW LONDON, Conn. (AP) — Branyelle Carillo was facing the prospect of a summer marooned by the pandemic at the Coast Guard Academy in New London when she was called up for a mission: The U.S Coast Guard cutter Munro, bound for a patrol of the U.S. maritime border with Russia, had lost a tenth of its crew to quarantine and needed reinforcements.

Within two days, Carillo and 15 other students from the academy, some of whom had never been on a ship before, were part of its crew. She and 10 other second-year students, known as 3rd Class cadets, were sent to join five seniors, or 1st Class cadets, who had earlier been assigned to the cutter.

“The list came out and we just got up and went,” she said. “They just voluntold us. It was exciting."

The Munro had been embarking from California in late June for the patrol when one of its crew members tested positive for the coronavirus. Contact tracing resulted in 14 shipmates being ordered into quarantine for two weeks.

Capt. Blake Novak said that didn’t leave him with enough service members to sail. He came up with the idea of replacing them with cadets, having heard that much of the fleet was canceling internships and summer shadowing opportunities because of the pandemic.

“We were the only option to be up there and patrolling; there was no backup option,” Novak said. “I needed to be there.”

The cadets, tested and coronavirus-free, took over the menial jobs on the 418-foot Munro, such as washing dishes and cleaning its small boats.

But they also became qualified to handle the ship's lines, become lookouts and perform safety duties such as firefighting. They received initial training in how to steer the cutter at the helm.

The cadets helped launch the boats that boarded fishing vessels, kept an eye out for Russians and were charged with preventing the ship from running into the pods of orcas and other whales they would spot along the way.

“There was this one time we were doing a boarding and there was a blue whale that breached out of the water, right next to the boat,” said 19-year-old Cadet Tyler Huynh, of Mount Laurel, New Jersey. “I was on lookout for that. It was just so sick, but it was also kind of scary because it was so close.”

The cadets spent 52 days at sea, traveling from the Arctic Circle to Hawaii to participate in naval exercises. They explored an uninhabited island that was filled with hot springs and spent time alongside a Russian patrol boat, communicating with it using just signal flags.

The tender ages of the cadets, ranging from 19 to 22, turned out to be an advantage in one critical situation, Novak said.

The ship was spending an off day in port at Dutch Harbor on Amaknak Island in Alaska when the captain got word of a large storm headed their way. The cutter had to leave in the middle of the night to stay ahead of the weather or be stuck in port for four days, potentially missing the start of the Pacific Rim exercises.

Much of the crew had been attending a barbecue on shore, where alcoholic beverages were served. A 12-hour “bottle to throttle” rule meant that only those who were not drinking that day were allowed to perform the jobs needed to get the Munro underway.

“We were all nervous, because it was just us and maybe three other qualified people who weren’t drunk handling the lines,” said Carillo, 20, of Aberdeen, Maryland. “So we just had to figure it out. We were nervous.”

The cadets said the experience on the Munro, made possible only because of the pandemic, was life changing.

Cadet Malia Haskovec, of Dumfries, Virginia, had been planning a career on shore, perhaps inspecting private boats. Now, she wants to be out at sea doing law enforcement.

“Seeing the adventure, the excitement, the hard work the grit and determination that is required to be underway, I just kind of fell in love with it,” she said.