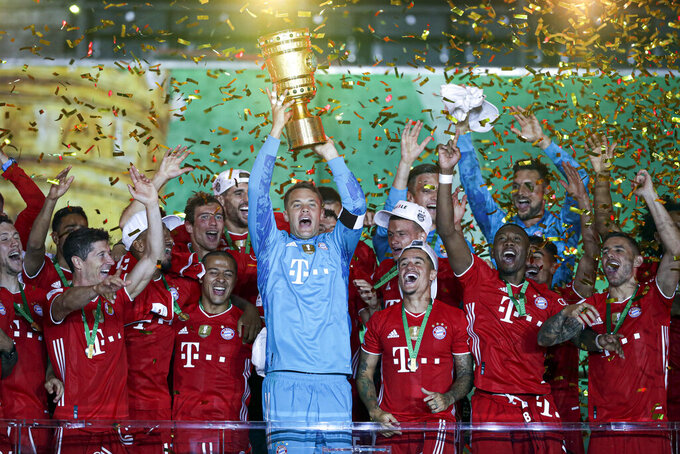 FILE - In this Saturday, July 4, 2020 file photo, Bayern Munich players celebrate after winning the trophy in the German soccer cup (DFB Pokal) final match between Bayer 04 Leverkusen and FC Bayern Munich in Berlin, Germany. German soccer club Union Furstenwalde could have had the game of a lifetime. The small club was due to host Bundesliga team Wolfsburg in the first round of the German Cup but the coronavirus pandemic meant that wasn't possible. (AP Photo/Michael Sohn, File)

DÜSSELDORF, Germany (AP) — It could have been the game of a lifetime for fans of German soccer club Union Fürstenwalde, taking on Bundesliga team Wolfsburg in its 2,000-capacity home stadium. The coronavirus made it impossible.

Fürstenwalde, from the north-east regional league, is one of 11 German clubs in the fourth and fifth divisions who gave up their cherished home advantage against much bigger opponents as the German Cup begins this weekend.

Instead of playing before a passionate crowd of locals trying to intimidate the Bundesliga visitors, Fürstenwalde will travel to Wolfsburg's empty reserve stadium.

In normal conditions, Fürstenwalde could hope to earn 350,000 euros ($410,000) from its first German Cup game and invest it in the club's future, club spokesman Fred Wilczek told The Associated Press.

This season it faced spending much of its prize money from a regional qualifying competition on adapting the stadium for TV, with spectator numbers greatly reduced even if the club had approval from local authorities. The situation during the pandemic is “extremely problematic,” Wilczek said.

The first round of the German Cup is a traditional showcase for amateur and semi-professional teams, who automatically get home advantage against clubs from higher divisions. It usually brings a windfall in ticket sales and TV exposure, so competition to qualify via regional cups is fierce.

The home crowd can lift obscure teams to a surprise victory — or several — on the national stage. Last season, fourth-division club Saarbrücken knocked out two Bundesliga clubs at home on its way to the semifinals before being beaten by Bayer Leverkusen in an empty stadium amid the pandemic.

This season, strict rules around the coronavirus left small clubs facing big costs to play at home, or simply a flat refusal from the German soccer authorities.

Besides testing players for COVID-19, clubs have to divide the stadium into three working zones to enforce social distancing between people working in different roles before and during the game. Even for a Bundesliga club it's an organizational headache. In a cramped or ramshackle amateur stadium, it may be impossible.

Fifth-division club Rielasingen-Arlen complained the German soccer federation, known as the DFB, forced it to give up home advantage despite attempts to show it could host safely at its own stadium or other local grounds.

“With a heavy heart we had to give away hosting rights for the DFB Cup game against Holstein Kiel. We had to give in to the great pressure which was piled onto us by the DFB,” the club said in a statement.

The DFB allowed defending champion Bayern Munich to move its first-round game against fifth-division club Düren back a month to Oct. 15. That allows Bayern more time to recover after winning the Champions League final. That game also will be played at Bayern's home stadium.

German rules on fans at games during the pandemic are a patchwork of regulations from different local authorities. Bundesliga club Mainz is hoping to have 1,000 fans when it hosts fourth-division club Havelse. Schalke wants to invite 300 workers from hospitals and senior care homes to watch it play Schweinfurt. Both Havelse and Schweinfurt gave up home advantage citing the burden of hosting under coronavirus-related restrictions.