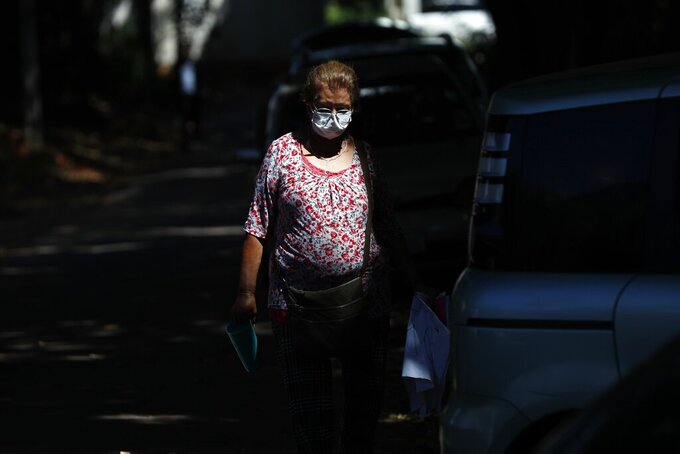 Lina Barrios walks outside the ICU of the Respiratory Hospital INERAM where her son is being treated for COVID-19 in Asuncion, Paraguay, Wednesday, March 3, 2021. Barrios said she has had to buy her son's medication at pharmacies because the hospital is out, costing her $8,400 in two weeks. (AP Photo/Jorge Saenz)

ASUNCION, Paraguay (AP) — Paraguay has cancelled nonemergency surgeries in all public hospitals due to a flood of COVID-19 patients that has overwhelmed intensive care units.

The Health Ministry said Wednesday that those resources would be dedicated to treating the pandemic.

While Paraguay's COVID-19 death toll of 3,218 is far below that of neighboring nations, the South American country of 7.6 million people has run short of medical ammunition to fight the disease.

“We don't have x-ray plates, nasal-gastric catheters, there are no basic medications,” said pneumologist Carlos Morínigo at the National Institute of Respiratory and Environmental Diseases in the capital.

He joined about 20 other health workers protesting against the government in front of the hospital and periodically blocking traffic. Relatives of intensive care patients also took part, shouting, “We want supplies! Enough with injustice!"

Moringo complained that despite the lack of medicines, too many people were lax about precautions against COVID-19.

“People are relaxed, playing soccer and volleyball with friends, without distancing or respecting health protocols,” he said.

Institute Director Felipe González told local radio stations he had offered his resignation “because there is no medicine and infected people keep coming to the hospital.” He said the ministry had not responded.

Gladys Martínez said she had tried to find a day's worth of medications at pharmacies for her mother, who was hospitalized at the Institute, “but the price was 5 million guaraníes” — about $850. “This is a disaster,” she added.

Meanwhile, President Mario Abdo Benítez published a video on his Facebook page saying the country has had good results in containing and treating the disease.

The country has contracted for 1 million doses of the Russian Sputnik V vaccine against COVID, but so far only 4,000 have arrived. Health Minister Julio Mazzoleni said he expects the rest in the coming weeks.

But the two combined would not be enough to cover the population, which so far has recorded more than 160,000 cases of the new coronavirus.