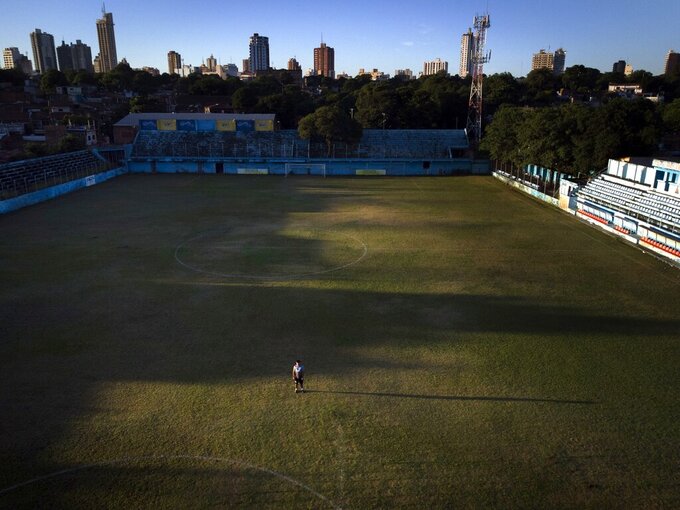 Striker Nicolas Caballero of the second division Resistencia football club stands on his team's pitch before a training session, in Asuncion, Paraguay, Tuesday, Feb. 2, 2021. Caballero, 32, who hasn't been paid by his club for more than a year, now has a food stall that sells barbecue on the streets of Asuncion to survive during the COVID-19 pandemic. (AP Photo/Jorge Saenz)

ASUNCION, Paraguay (AP) — Paraguay's second division footballers are working as gardeners, builders and egg salesmen to survive during the COVID-19 pandemic. Most of them haven't been paid by their clubs for more than a year.

The latest season of Paraguay's second division ended on Nov. 17, 2019, but the country's top-flight championship was the first to start in South America, only months after the pandemic set in.

Paraguayan soccer executives believe the 2021 second division season will start on April 9, as soon as the country's health ministry and the local soccer body have a deal for a COVID-19 protocol for three lower divisions and the nation's women's soccer championship.

Players of Paraguay's second division, named Division Intermedia, were paid a handout of $142 for three months, according to several of them that talked to The Associated Press. First division players received $430 for the same time span.

“It was a complicated year, especially for the second division,” said Luis Kanonnikoff, general-secretary of Paraguay's soccer association. He said there were four monthly payments to players, not three.

But that was too little for local footballers, who took different jobs to survive.

Sergio Rojas, a 28-year-old midfielder at Sportivo Ameliano, gets out of bed very early to load his small car with boxes of eggs. He travels 25 kilometers to the capital, Asuncion, so he can train. And after a shower he rushes to his new job. He charges $2.5 for 30 eggs.

Rojas, his wife and two kids survive on a monthly income of $200 at best from the egg sales, plus gigs to wash cars that add at least another $50. That amount is half of what he used to be paid as a footballer.

Midfielder Nicolás Caballero, who played for club Resistencia, now has a food stall that sells barbecue on the streets of the city of San Lorenzo, in the suburbs of Asuncion.

“The life of second division footballers in our country is tough, and during the pandemic the needs became gigantic," 32-year-old Caballero said. “With no tournaments, we don't get paid at all, and everyone has a family. Many were forced to learn how to do something else to survive and others went back to what they were doing before soccer.”

Goalkeeper Jorge Chena, of Atyrá FC, has started working as a carpenter at age 32 despite his 13-year career. His wife, pastry chef Rita Fernández, pays most of the bills in the house now.

Midfielder Fulvio Duarte, of Yegros, is finishing his studies as a physiotherapist while he works with his wife in an online shop of orthopedic products.

Rogelio Delgado, president of Paraguay's footballers' association and a former defender of the national team said the pandemic showed how weak the infrastructure for professional players is.

The footballers are cautious about whether their return will indeed take place in April. But they are eager to go back to the pitches.

“I even miss the referee,” said footballer Nicolás Caballero. “That says it all.”

Androetto contributed to this report from Buenos Aires, Argentina.