Parise gets winner for Wild in home opener over Sharks, 4-1 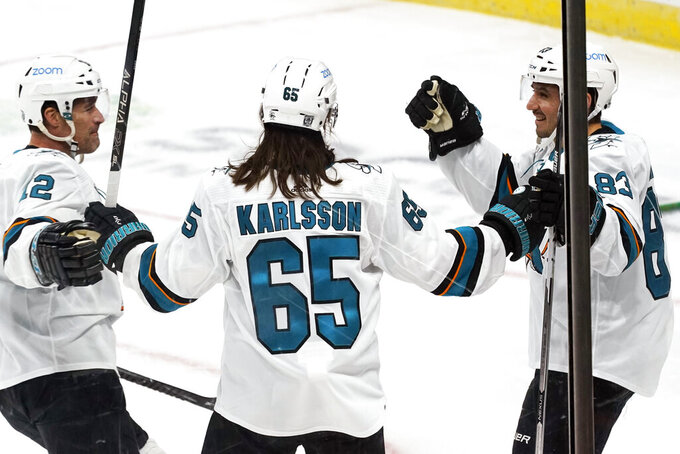 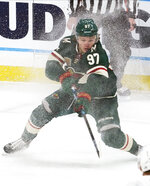 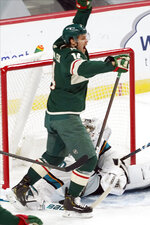 Then he scored on his friend and former teammate.

Parise scored his first goal of the season to break a second-period tie, spurring the Minnesota Wild to a 4-1 victory over Dubnyk and the San Jose Sharks on Friday night.

Joel Eriksson Ek had an early goal for the Wild against Dubnyk, who made 25 saves for the Sharks on the Minnesota ice he called home for the previous six years. Kevin Fiala and Jordan Greenway added empty-netters late, as the Wild (4-1-0) maintained momentum from a strong start on the road with a well-rounded home opener.

“That’s what good teams do,” said Kaapo Kähkönen, who stopped all 17 shots he faced over two periods after relieving an injured Cam Talbot. “It doesn’t have to be flashy all the time.”

Matt Nieto scored for the Sharks (2-3-0) and their traveling show, five games into a season-opening eight-game trip that will likely grow longer given local virus restrictions preventing them from on-ice activity in San Jose.

Dubnyk’s family has remained in Minnesota, with the Sharks unsure when they’ll be clear to settle in Northern California. With league permission, his wife and three children came to the game among the approximately 80 attendees, otherwise all family and friends of the Wild. Visiting teams are normally restricted this season from having guests at games, but Parise and his wife made the effort to get the Dubnyks in the building.

“I had to settle myself down after the first and tell myself to relax. I was a little fired up and overthinking stuff. I just wanted to give the guys a good chance,” Dubnyk said.

Parise and Fiala, the Wild’s top two goal scorers last season, went the first four games without a point. Parise ended that streak in typical fashion by knocking in from the crease a rebound of Nick Bjugstad’s shot, seconds after Dubnyk had denied his friend with a kick save.

“I guess that was good karma on his part. I stopped him there and then shortly after he put it in the back of the net,” Dubnyk said.

Talbot let in Nieto’s shot through traffic from the slot just 1:11 later. Soon after that, he appeared to suffer a lower-body injury and needed a few minutes to compose himself after medical examination.

Kähkönen won his only start at Anaheim on Wednesday. Wild coach Dean Evason said he didn't believe Talbot's injury was serious. If Kähkönen has to take an extended stay in the net, though, the Wild won't be worried.

“We don’t know as a player what’s it like to not be starting and then just all of a sudden halfway through have to hop in and get yourself mentally ready,” Parise said. “So he came in and made big saves and looked great.”

Eriksson Ek has five points in five games. The 23-year-old center, thriving on the third line with Jordan Greenway and Marcus Foligno, scored his third goal of the season on a tip-in past Dubnyk just 5:01 into the game. That gave the Wild an opportunity to unveil their new goal song: the 1992 rap anthem “Jump Around” by House of Pain.

Even without an actual crowd, save for the high school jerseys draped over cardboard cutouts in the priciest seats, the Wild played the customary tribute video to Dubnyk during a first-period break. Players from both teams tapped their sticks against the boards in appreciation.

LW Ryan Donato, who was also traded by the Wild to the Sharks during the offseason, had a game-high five shots on goal. ... Karlsson assisted on Nieto's goal and has 21 points in 16 career games against the Wild.

The Wild went 0 for 3 on the power play and are 1 for 23 this season. ... LW Nico Sturm was scratched with an illness, the team said, unrelated to COVID-19. Brad Hunt, a healthy scratch in the first four games, moved up from the blue line to take his place.

The same teams play here again on Sunday night. All eight of their matchups this season are divided into two-game sets.