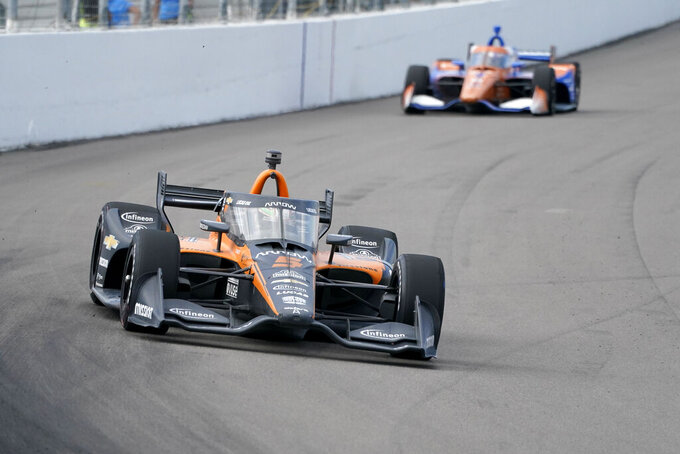 The start-and-stop uncertainty of this IndyCar season has not bothered Pato O'Ward, leader of a young fleet of drivers new to the series but capable of keeping up with the veterans.

O'Ward, in his first full season of IndyCar, has climbed to third in the championship standings headed into the Saturday and Sunday doubleheader at Mid-Ohio Sports Car Course in Lexington, Ohio. He's coming off a pair of podium finishes on the oval at Gateway, where O'Ward led 130 laps over two races.

Had the pandemic not decimated the IndyCar schedule, O'Ward might have built some momentum to have already earned his first series win. The 21-year old Mexican acknowledges there have been long pauses in racing this season but learned to adjust to uncertainty during a chaotic 2019.

“I’m so thankful for this year because to me this is not a surprise. It’s not that crazy for me because last year, I don’t know how much crazy you could have gotten from that,” O'Ward said.

It was quite the odyssey for O'Ward, who won nine of 17 Indy Lights races and the 2018 title that earned him a promotion to the big leagues. He was set to join Colton Herta to form the youngest lineup in IndyCar history but his deal with Harding Steinbrenner Racing collapsed a month before the season opener.

O'Ward began to salvage 2019 with a job driving for Carlin that began the second race of the season. But the organization had its struggles, failed to qualify for the Indianapolis 500 and O'Ward bolted for Europe when Red Bull added him to its driver development program in June.

O'Ward was entered in one Formula 2 race then Red Bull moved him to Japan's Super Formula category.

“And then I got shipped off to Japan, a country that I had no idea about, the language and culture.”

O'Ward loved his four months in Japan and found the Super Formula cars “insane to drive," but Red Bull let him go at the end of the season. Then things got even crazier.

Sam Schmidt's race team had been overhauled via a partnership with McLaren, and McLaren boss Zak Brown moved fast to grab O'Ward. To make room for O'Ward, the new Arrow McLaren SP team had to fire James Hinchcliffe, one of the most popular drivers in the series.

Fans condemned the move but O'Ward and rookie Oliver Askew have answered the critics. Askew was the 2019 Indy Lights champion and replaced Marcus Ericsson when McLaren came aboard.

O'Ward through nine races has not finished lower than 12th, was the highest-finishing rookie in the Indy 500 and ranks higher in the standings than three series champions and a slew of IndyCar veterans. Askew, who is 23, has one podium finish but has been hampered by the lack of practice time in IndyCar's revamped schedule. Askew is a pure rookie, while O'Ward made eight IndyCar starts before this season.

They have elevated the Schmidt program and have worked together to improve each race.

“We have a job and we race for the team. We’re not very selfish people,” Askew said. "Pato seems to be the kind of driver who just shows up and drives the wheels off the thing, and I think I have to be a little bit more in-depth with what’s going on to become successful.

“I think there’s just two different approaches and we can feed off each other. It’s been a pleasure for sure. We’re continuing to get along well and continuing to build our relationship.”