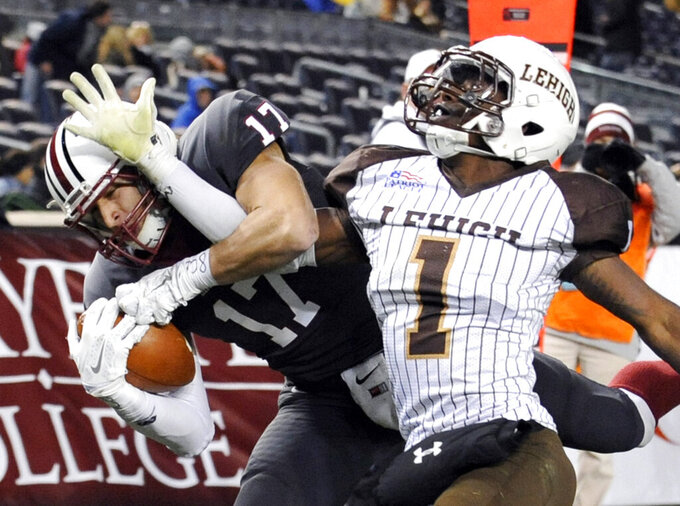 FILE - In this Nov. 22, 2014, file photo, Lafayette wide receiver Matt Mrazek, left, catches a touchdown pass as Lehigh cornerback Oliver Riguad defends during the second half of an NCAA college football Patriot League game at Yankee Stadium in New York. The Patriot League joined the Ivy League on Monday, July 13, 2020, punting on a fall football season because of the coronavirus pandemic while holding out hope that it could be made up in the second academic semester. (AP Photo/Bill Kostroun, File)

The Patriot League joined the Ivy League on Monday, punting on football and other fall sports because of the pandemic while holding out hope games can be made up.

The Patriot League said its 10 Division I schools will not compete in any fall sports, which include football, men's and women’s soccer, women's volleyball and field hockey. The council of presidents said the league will consider making up those seasons in the winter and spring if possible.

The conference is mostly comprised of private schools located in the Northeast that offer limited athletic scholarships. Pennsylvania rivals Lehigh and Lafayette have played 155 times, more than any two opponents in college football history.

Army and Navy are also Patriot League members, but not in football.

Meanwhile, at the top of college sports, Southeastern Conference athletic directors met in person in Birmingham, Alabama, to discuss how the SEC can have a football season as COVID-19 cases spike throughout much of the South.

No final decisions were expected to be announced, but the meeting comes just days after the Big Ten and Pac-12 said they would play conference-only schedules this fall in football and a number of other sports.

SEC football media days, the unofficial start of the season for many fans, had been scheduled to begin this week, but the coronavirus pandemic forced all FBS conferences to hold those events online this year. Even some of those — for the SEC and ACC — are now on hold.

Some programs are taking steps toward playing in and even starting their football seasons on time. Monday was the first day the NCAA allowed football players to take part in mandatory team activities with coaches, including unpadded walk-through practices.

Florida State posted a video on social media of its team hitting the field with players and coaches wearing face coverings and shields to help stop the spread of coronavirus.

Pac-12 football teams will have to wait. Last week, conference presidents delayed mandatory team activities for Pac-12 athletes, acknowledging it would likely delay the start of the fall sports seasons.

Iowa State athletic director Jamie Pollard in a letter to fans posted online said the school is trying to balance the health and safety of athletes with the drastic financial repercussions of not having a football season.

“If we are unable to play sports this fall, the athletics department would incur approximately $40M in unfunded expenses in the next six months,” Pollard wrote.

College football season was scheduled to start with a handful of nonconference games — three involving Pac-12 teams — on Aug. 29, before a full slate around Labor Day weekend from Sept. 3-7.

Lehigh and Lafayette, located 17 miles apart in Eastern Pennsylvania, started playing in 1884, sometimes as many as three times in a season. Only in 1896 was the rivalry not played since it began.

Army and Navy play in college football's highest tier of Division I and were exempt from the Patriot League's decision regarding other fall sports. The Patriot League council said the service academies will be allowed to pursue competition in those sports in which they usually compete within the conference, including soccer and volleyball, as the schools' leaders see fit.

Follow Ralph D. Russo at https://twitter.com/ralphDrussoAP and listen at https://podcastone.com/AP-Top-25-College-Football-Podcast