Patriots all-virtual in prep for delayed game vs. Broncos 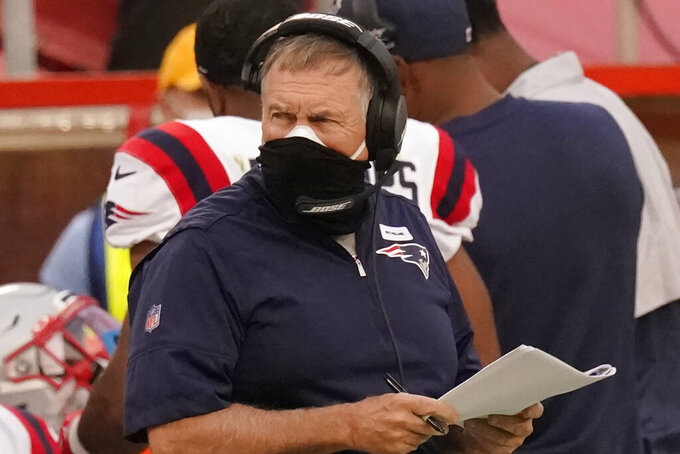 New England Patriots head coach Bill Belichick wears two masks as he watches from the sideline during the first half of an NFL football game against the Kansas City Chiefs , Monday, Oct. 5, 2020, in Kansas City. The New England Patriots have canceled practice amid reports that a third player has tested positive for the coronavirus. Sports Illustrated reported that reigning NFL Defensive Player of the Year Stephon Gilmore tested positive for the virus on Wednesday, Oct. 7, 2020, and was added to the team's reserve/COVID-19 list. (AP Photo/Charlie Riedel)

FOXBOROUGH, Mass. (AP) — New England coach Bill Belichick says the team is continuing to prepare to play its against the Denver Broncos after the Patriots returned no new positive COVID-19 tests on Thursday.

“This is really more of a medical situation than a football situation,” Belichick said during a conference call Thursday morning. “So we’ll work through the decisions and input from the people in the medical field, a combination of the Patriots and league. People that know this, know the situation, know the virus and the specific circumstances that are involved here, both in the past and going forward.”

On Thursday evening, the NFL moved the game, originally scheduled for Sunday at 1 p.m., to Monday at 5 p.m.

The Patriots shut their practice facility Wednesday and Thursday after quarterback Cam Newton, cornerback Stephon Gilmore and practice-squad player Bill Murray all tested positive for the coronavirus over a five-day period.

Newton was held out of New England’s loss to the Chiefs this past Monday after testing positive on Saturday. Gilmore didn’t test positive until Tuesday.

“I don’t think we can really plan too far ahead, (or) start talking Saturday, Sunday, or a bunch of other days,” he said. “There is a lot that can or can’t happen in the meantime. And as things change and if there are positive or potentially negative developments, we’ll look at those.”

Patriots players had the day off Tuesday, meaning that Friday and Saturday could be their only chances to practice before Monday's rescheduled kickoff.

“We knew that at the beginning of the season that there were going to be challenges, and there have been,” Belichick said. “We’re ready to work through them. And that’s what we’re doing.”

Broncos general manager and president of football operations John Elway said Thursday afternoon that his preference was to play the game as scheduled.

“We want to play on Sunday," he told the team's website. “Now, if there’s a safety issue, I get it. But I would like to play on Sunday. That’s what we’re working for. Going back East and playing on a Monday night, then having to come back and play on a short week again, I think it hurts us in the long run. But we’ll do what we have to do.”

It is unknown whether Newton exhibited any coronavirus symptoms before or after his positive test, but Gilmore posted on Twitter that he was showing no symptoms as of Wednesday. Belichick said he had no update on Newton's status.

According to the NFL’s COVID-19 testing protocols, players showing symptoms can’t return until at least 10 days have passed since symptoms were first reported and at least 24 hours have passed since their last fever. All other symptoms, such as cough and shortness of breath, also must have improved.

If a player tests positive but shows no symptoms, he must either wait 10 days from the initial positive test, or can return after having two consecutive negative tests 24 hours apart.

So that leaves at least a chance both players could be available for Monday's game.

Belichick said there’s nothing preventing either player from participating in virtual meetings.

“We do the best we can with the opportunities we have,” he said. “It’s not ideal, but there is an opportunity to cover things and get things taught.”