Pats prepare to host Broncos in shadow of positive tests 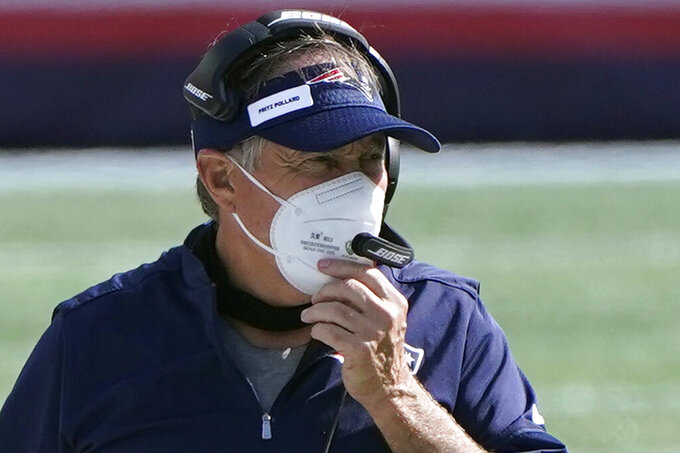 FILE - In this Sunday, Sept. 13, 2020, file photo, New England Patriots head coach Bill Belichick is shown in the second half of an NFL football game against the Miami Dolphins, in Foxborough, Mass. The Broncos play the New England Patriots on Sunday, Oct. 11. (AP Photo/Steven Senne, File)

FOXBOROUGH, Mass. (AP) — For the second straight week, the New England Patriots are heading into a game after having their preparations disrupted by a teammate contracting coronavirus.

Last week it was Cam Newton, who tested positive two days before their matchup with Kansas City and was forced to sit out.

This week the Patriots' facility was closed for most of the week after reigning Defensive Player of the Year Stephon Gilmore joined Newton on the reserve/COVID-19 list along with practice-squad player Bill Murray.

It altered New England’s game prep for Sunday’s matchup with Denver to virtual meetings and film study. It’s also left the Patriots at a competitive disadvantage as they look to extend a four-game home win streak over a Broncos team that has gone through a normal, on-field practice schedule.

“I think we knew at the beginning of the season that there were going to be challenges and there have been,” Patriots coach Bill Belichick said. “We’re committed to working through them and that’s what we’re doing.”

Broncos coach Vic Fangio said Thursday that he hadn't heard anything about game getting moved back and that his preference was to stick to Sunday.

Broncos quarterback Brett Rypien said he doesn’t have any reservations about playing in New England following the outbreak.

“I don’t think there’s any concern on our end. We trust the league will make the right decision. Whatever happens, happens,” he said. “Right now we have to focus on the game plan and getting ready for the game and we’re preparing as if we’re going to play on Sunday.”

The status of both Newton and Gilmore for Sunday remains unclear, though Gilmore said in a post on Twitter that he wasn’t experiencing symptoms as of Wednesday.

If Newton doesn’t play, the Patriots will have to choose between backups Brian Hoyer and Jarrett Stidham. Both had struggles against the Chiefs. Hoyer got pulled late in the third quarter following an interception and fumble. Stidham threw a touchdown pass but also had a pair of interceptions.

Belichick was noncommittal on who might start if Newton is unavailable.

“We’ll see how it goes,” Belichick said. “We’ll make a decision on that after we get more information on all those guys, starting with Cam.”

The Broncos had both a 100-yard receiver and a 100-yard rusher last week for the first time since Peyton Manning played his last regular-season game, on Jan. 3, 2016. It had been a whopping 70 games without a 100-yard receiving/rushing duo before Melvin Gordon ran for 107 yards and two TDs against the Jets and Tim Patrick caught a half dozen passes for 113 yards and a score.

Broncos kicker Brandon McManus has been money ever since signing a four-year, $17.2 million extension on the eve of the season opener. He was the AFC’s special teams player of the week for his performance in Denver’s 37-28 win over the Jets last week, when he posted his fifth career game with multiple field goals of 50 or more yards. That’s tied for second most in NFL history.

“Every time I step on the field, I have the utmost confidence in myself to make the kick,” McManus said. “This season so far, especially on the longer ones, I’ve been trying to do better at staying more relaxed out there, rather than be excited to kick them and getting too fast.”

New England turned the ball over four times against Kansas City, its most since it had five in a 33-10 Week 13 loss to Pittsburgh in 2008

Offensive coordinator Josh McDaniels said as versatile as Newton is, their offense isn’t just built around him and can adjust under either Hoyer or Stidham.

“Cam runs our offense; he doesn’t just run a Cam offense,” he said. “There’s certain things he can do that other guys can’t, but those are easy to move into and out of the game plan if we need to.”

This could mark the third straight week that the Patriots have had to make adjustments on the offensive line because of injuries.

Starting center David Andrews will be on injured reserve (hand) for at least another week before he can return. Left guard Shaq Mason began the week still dealing with the calf injury that sidelined him for last week’s loss in Kansas City.

Left tackle Isaiah Wynn, who has started all four games this season, also has a calf injury.