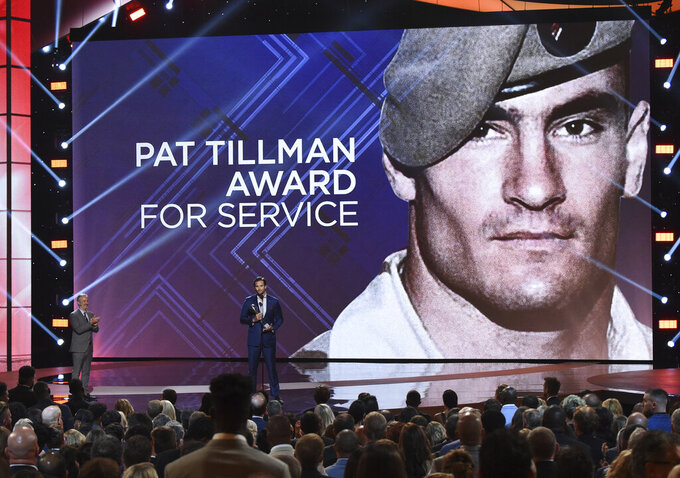 “Your flight from Philadelphia to Phoenix leaves in one hour,” it read.

Thomas scheduled Wednesday's trip to continue his annual tradition of participating in Pat's Run, a fundraiser and celebration of Pat Tillman's life. The flight was booked before the pandemic shut down most of the country and he forgot to take the reminder off his phone.

“It just kind of knocked me out," Thomas said. “It's a great event, a great weekend and some of the people I've met there are some of my best friends in the world. To not be able to hang out with them at this event and have a mini-reunion just kind of tells me how scary the times we are in with this COVID-19."

The coronavirus pandemic has shut down sports across the country, from college sports to the NBA and NHL. Several running and cycling events have been postponed until later dates, including the Boston Marathon and Tour de France. Others like the New York Half Marathon and Penn Relays opted to cancel.

A handful decided to continue — with a catch.

The Ironman VR Pro Challenge held a virtual race earlier this month and made news when Mirinda Carfrae, who was in second place, got disconnected from the race when her husband tripped over a power cord.

The Bill Walton and Friends Inter-Galactic Bike for Humanity ride, which benefits coronavirus victims and healthcare workers, has asked riders across the country to ride for at least two hours on April 25 at 6 feet, 11 inches apart — the Hall of Fame NBA player's height.

The race registration platform RunSignUp has seen an increase in virtual races created on its website as numerous virtual events have popped up to raise awareness and money for the pandemic.

Pat's Run organizers changed gears on March 14 as the outbreak began to spread. They initially looked at moving the 4.2-mile run to the fall, but the schedule wouldn't work for the city of Tempe or the first responders needed to staff the event.

Canceling Saturday's race didn't seem like the right option. Pat's Run came together not long after the death of Tillman, the former NFL player turned soldier who was killed by friendly fire in 2004. It started with a group of friends honoring the memory of a deep-thinking man who loved the thrill of a physical challenge.

It has since blossomed into a race of 28,000 people with honor runs in 40 cities that has raised $18 million for the Pat Tillman Foundation, which supports veterans and military spouses.

"As you think about why we do this, run to honor Pat and the life that he lived and the legacy that he’s left, you know, it did not feel right to simply cancel the race," Pat Tillman Foundation CEO Dan Futrell said. “That's when we decided to start looking at what a virtual run would look like.”

The first step was figuring out the logistics of the actual race.

Organizers reached out to other races that have gone virtual to help make the transition. To track runners in all corners of the country, they teamed up with the cycling and running app Strava.

With Strava, organizers can follow runners' locations, speed and time as if the race was happening in person. The app also allows runners to plot a course to finish the 4.2 miles, a distance designed to honor Tillman's jersey number, 42.

“I was going to fly to Phoenix, but now my wife and my baby girl are going to do it here in Delaware,” said Thomas, who lives in Wilmington. “We've got our route mapped out. It's going to be cold, but there's no excuse not to get out there.”

Organizers also had to figure out a way to get racing packets to the runners. Typically, runners would pick up packets and shirts at Sun Devil Stadium, where the live races ends, but that wasn't an option with the stay-at-home order in Arizona.

Mailing was the only way, but volunteers couldn't gather to send the packets and the race was facing up to $20,000 in unexpected expenses. Organizers were able to get the company that provides the shirts, packets and medals to mail directly to participants.

Even with the direct mail, the foundation is expecting about a $300,000 drop in revenue due to shipping costs and other COVID-19-related expenses.

Another big concern was runners backing out of the race and charging back their credit card before the 30-day posting period was up. Some races were seeing a 40% charge back and Pat's Run would be charged a fee for each transaction, adding yet another unexpected expense.

A few people backed out early — and still can before the race through patsrun.com — but the overall charge-back has been less than 5%, meaning less expenses and another capacity race — even if it is done virtually.

“To me, that speaks to people’s connection, to our mission and to the work that we’re doing here,” Futrell said.