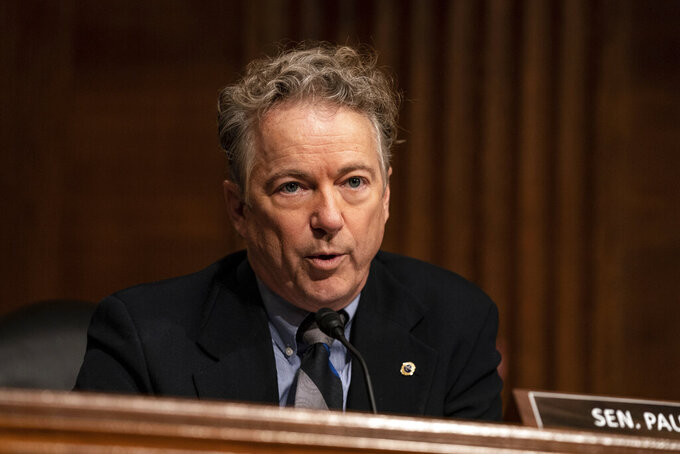 Three GOP House lawmakers said they're crafting the bill but didn't offer details, telling a House committee it will be filed Tuesday. The plan is for the panel to vote on the measure that same day, the committee chairman said. Tuesday will be the halfway point of the 30-day session.

Kentucky allowed widespread mail-in voting last year to try to protect people from COVID-19. It was part of an agreement between Democratic Gov. Andy Beshear and Republican Secretary of State Michael Adams that minimized long lines and other complications and was credited for the state's big voter turnout in the midst of the pandemic.

The looming debate over Kentucky election law comes after months of unsubstantiated claims by former President Donald Trump about the integrity of mail-in votes and his baseless claims of widespread fraud in last year's presidential election. Republicans in recent years have largely tried to put limits on ballot access in the name of election security, while Democrats have pushed to expand it.

Speaking remotely to the Kentucky House committee on Thursday, Paul tied in-person voting to election security, saying it's "harder to verify mail-in votes than it is in-person votes.”

“It’s a fact, it’s easier to verify who someone is when they show up and show their ID," the Kentucky Republican said. “So I think our rules should be that we encourage voting in-person and that we discourage not voting in person.”

Exceptions should remain to allow absentee voting for such people as the ill, elderly or military members, Paul said. Kentucky's election provisions for 2020 were temporary due to the coronavirus, and absentee voting traditionally has accounted for a fraction of overall voting in the state.

Paul urged lawmakers to make sure the election law is “explicit” to avoid any potential loopholes.

“In devising this law, be aware that if you don't tell people they can't do something, the courts have interpreted this to mean they can do it,” Paul said.

The bipartisan agreement between Beshear and Adams last year also allowed weeks of early in-person voting to prevent a crush of Election Day voting during the pandemic.

Adams has offered input as the emerging measure has been written, along with county clerks and the State Board of Elections, the pending bill's sponsors said Thursday.

“Secretary Adams believes that in-person voting is the gold standard, and hopes this bill will expand in-person voting opportunities with at least a few days of early voting,” his spokeswoman, Miranda Combs, said in a statement Thursday.

The goal is that the measure will enhance the “integrity and trust” of the election system, said Rep. Jennifer Decker, one of the lawmakers working on the measure.

Democratic Rep. Buddy Wheatley said election integrity should be a nonpartisan issue as he stressed the need for Democratic input on the bill. Republicans hold supermajorities in Kentucky's legislature. Decker said Democratic county clerks have been among those consulted.

Another Democrat, Rep. McKenzie Cantrell, complained that Republicans did not shed light on what will be in the bill. Committee members were told they will receive a draft copy Monday.