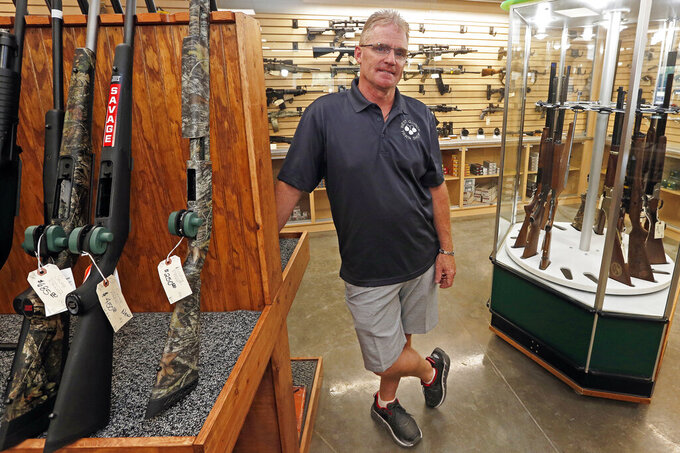 In this Thursday, June. 18, 2020, photo, West Quincy Pawn Shop owner Lionel Hammond poses for a photo in the gun section of the store which Hammond pointed out has a noticeably low stock in West Quincy, Mo. At West Quincy Pawn Shop, Hammond said sales have been off the charts and that he can't keep merchandise on the shelves as buyers are using their governmental stimulus money to buy firearms, jewelry, televisions and other electronics. (Jake Shane/Quincy Herald-Whig via AP)

QUINCY, Ill. (AP) — Providers of fast money, pawn shops throughout the region have taken on an enhanced profile in an economy turned upside down by the coronavirus.

“We were an essential business because we have loans. Not everyone can get an afford or qualify for a loan at a bank, so for a while we were thinking we were going to be pretty busy,” said Mike Pigg, who has owned Mike’s Jewelry and Loan, 126 N. Fifth, since 2011.

Instead of being busy providing loans, Pigg and West Quincy Pawn Shop owner Lionel Hammond said the pawn shops have been swamped with customers coming in buying guns, jewelry, electronics and other goods.

“Right now, we are still seeing people coming in with their stimulus checks, and they are in a buying mood. Never in all of my years, have I seen anything like this,” said Hammond, who has owned West Quincy Pawn since 1995.

“This is the time of the year that people borrow money because they are going to go and do fun things, take vacations, weekend trips or just do something fun with their family. Because of the pandemic and not being able to work, many people are not going to do those fun things. They are instead looking for something to do that is fun at home, and for a while, we were one of the few places that was open for people to buy anything fun,” Hammond said.

Hammond and Pigg both credited the federal government-issued stimulus checks, which provided up to $1,200 to millions of American taxpayers as the reason they are seeing this boom in spending that got its start in late April and early May. The stimulus checks were intended to encourage cash-strapped Americans to spur economic growth as the nation looked to economically rebound after the economy ground to a halt due to the pandemic.

“Honestly, when the coronavirus hit, it hit at a time when its our Christmas time. We normally see a lot of people coming in and buying because they have their income tax returns, but this year there was no one coming in. People were using their income tax money to live on, not to buy things like electronics or jewelry. It got so bad here that I wasn’t sure if we were going to be able to pull out of it,” Pigg said.

Sales are not just up in West Quincy and in Quincy pawn shops, according to data from various trade organizations.

“I know it is just here or there but across the board. When I talk to my friends who own pawn shops, they all tell me the same thing -- it is a buying spree like no one has seen,” Hammond said.

He explained that while business was allowed to stay open during the first wave of the pandemic, he is now having a hard time keeping merchandise on the shelves because manufacturers and other retailers are closed.

Pigg said he was having similar difficulties.

“Electronics just flew out the door. We can’t keep electronics in stock, especially game systems. People have been home for home for so long now that they are coming in and wanting to buy a new gaming system or something to simply give them something to do,” Pigg said.

And like any other essential business, pawn shop owners and managers have made some adjustments to their store since mid-March to prevent the spread of the virus, including altered hours, adding hand sanitizing stations at the front door, plexliglass at the counter, and signs encouraging store patrons to maintain social distancing.

Both Pigg and Hammond say they anticipate the buying frenzy will likely stretch into mid-July as the volume of sales continues to slow.

“It is starting to slow, but as for how long it lasts who knows,” Hammond said. “It is bound to end eventually. Right now, people are starting to need money and loans again so maybe we are about ready to have normal times again.”