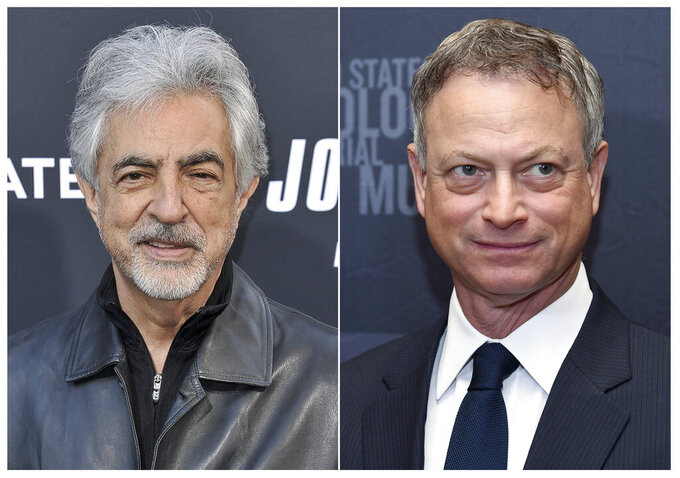 This combination photo shows actors Joe Mantegna at a special screening of "John Wick: Chapter 3 - Parabellum" in Los Angeles on May 15, 2019, left, and Gary Sinise at the Los Angeles Dinner: What You Do Matters at the Beverly Hilton Hotel in Beverly Hills, Calif. on March 16, 2015 photo. Mantegna and Sinise will host PBS' annual Memorial Day weekend concert. (AP Photo)

NEW YORK (AP) — The coronavirus has wiped out plans to bring tens of thousand of people to the U.S. Capitol for the annual Memorial Day weekend concert shown on PBS, but organizers are pressing ahead went a revamped event.

Performers like Trace Adkins, Cynthia Erivo, Renee Fleming and Christopher Jackson will appear on television in songs recorded remotely, in some cases from the Capitol grounds, obeying social distancing requirements.

The 31st annual Memorial Day weekend celebration will be televised on May 24 from 8 p.m. to 9:30 p.m. Eastern.

When the outbreak began, Colbert said he began planning on dual tracks — either a live concert or a pre-recorded television event. He shifted to the latter plan when the government officially nixed the concert about a month ago. None of the committed participants backed away, he said.

“Obviously we can't have 200,000 people sitting next to each other. That would be crazy,” Mantegna told The Associated Press. But, he said, “I think it will be great. It's going to be uplifting at a time we really need that.”

Mantegna has been a part of the event since 2002, when he was asked to read what some New York City firefighters had written about the Sept. 11 terrorist attack, with the National Symphony Orchestra playing behind him.

Being out in front of so many people “weakens the knees,” he said.

“I thought I was going to levitate off the stage,” Mantegna recalled. “I realized this was as big an event as I've ever done in my life, and it continues to be.”

Celebrating Americans who died fighting for the country is the holiday that makes all other holidays possible, he said. This year's show will be expanded to salute medical workers struggling to treat people sick with COVID-19.

Former Secretary of State Colin Powell will be making his 26th appearance on the show. U.S. Army Gen. Mark Milley, chairman of the Joint Chiefs of Staff, will also deliver a message.

The show will also feature some performances recorded in previous years, including by the National Symphony Orchestra, and readings by actors like Sam Elliott and Laurence Fishburne.