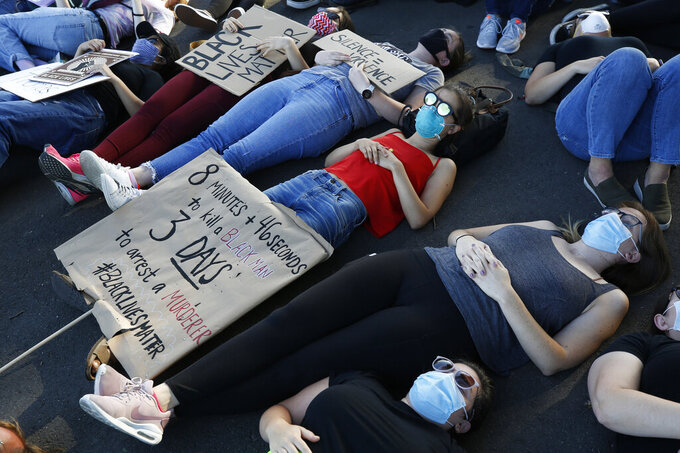 Protesters lay silent for 8 minutes and 46 seconds, Friday, June 5, 2020, during a demonstration to honor George Floyd, near the home of Sacramento Mayor Darrell Steinberg in Sacramento, Calif. Floyd died after being restrained by Minneapolis police officers on Memorial Day, May 25, 2020. (AP Photo/Rich Pedroncelli)

SAN FRANCISCO (AP) — Protesters prepared to march across the Golden Gate Bridge and filled the streets of San Francisco, San Diego, Sacramento, San Diego and smaller communities around California on Saturday to express outrage over the death of George Floyd.

In recent days the demonstrations have been boisterous but non-violent, in contrast to last weekend when some protesters smashed windows, burned police cars and confronted cordons of riot-clad police who fired tear gas and rubber bullets. Gone, too, was most of the looting that ransacked dozens of stores and which authorities say appeared mainly to be the work of non-protesters.

Mayor Darrell Steinberg summoned Sacramento's City Council into emergency session, recommending that the capital city end a curfew that had been planned to last each night though the weekend. He also recommended that Sacramento end its use of National Guard troops who were deployed to aid law enforcement after many buildings in the city's downtown were damaged a week ago.

“Last night’s peaceful and powerful demonstrations give me confidence that these steps, which we took reluctantly, are no longer necessary,” Steinberg said.

It would be latest local government to ease or end curfews that resulted in the arrests of thousands of demonstrators. On Friday, Gov. Gavin Newsom urged local authorities to end reliance on thousands of California National Guard troops who were deployed to major cities, saying “conditions have changed for the positive.”

Newsom suggested they could be redeployed to food banks that are helping people affected by the COVID-19 pandemic.

In Los Angeles, thousands of flowers were placed on the sidewalk outside the county Hall of Justice Friday after people were asked to bring roses symbolizing people they believe were victims of state violence. At City Hall, demonstrators chanted “no more names” and sang “Happy Birthday” on the 27th birthday of Breonna Taylor, a black woman who was shot and killed in her home by police in Kentucky earlier this year.

Davonté Pinson, 26, was in the City Hall crowd.

Police in Bakersfield said some counterprotesters threw smoke bombs and clashed with a group of Black Lives Matter protesters at the end of a peaceful march Friday night. Police said the fight spilled into a downtown roadway before officers broke it up without further incident. No injuries were reported and no one was arrested.

Many hundreds marched from Sacramento's Capitol 1 Center to a city plaza Saturday, first passing an area near the state Capitol where “Black Lives Matter” has been painted in giant letters stretching for three blocks.

Vivek Ranadive, chairman of professional basketball's Sacramento Kings, led the crowd in taking a silent knee, The Sacramento Bee reported, before saying: "We have just one message: Black Lives Matter.” He was joined by other current and former NBA players.

Steinberg promised in a tweet to work with police and the City Council “to build upon the police reforms we have implemented over the last several years.” The city enacted changes in response to the 2018 fatal police shooting in Sacramento of Stephon Clark, who was black.

Brian Marvel, president of the rank-and-file Peace Officers Research Association of California, which represents more than 77,000 individuals and 930 associations, meanwhile called for a national police use of force standard patterned after a pair of new California laws that were spurred in part by Clark's death.

Police can't operate without community trust that is broken when officers act improperly as they did most recently with Floyd, he said. He said that is why the U.S. needs a national standard “to mandate that all peace officers have a duty to intercede, to raise the bar for use of force training standards for all peace officers.”

Newsom on Friday ordered the state’s police training program to stop teaching officers how to use the carotid restraint or sleeper hold — an arm grip around the throat that blocks blood flow to the brain and can kill if used too long. He also said he wants the Legislature to set standards for crowd control and police use of force in protests.