Pebble Beach for pros only this year because of COVID spike 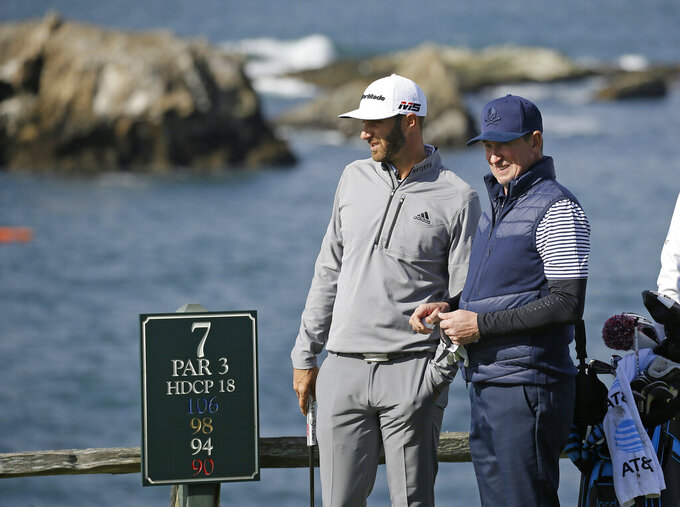 FILE - In this Saturday, Feb. 9, 2019, file photo, Dustin Johnson, left, and Wayne Gretzky stand on the seventh tee of the Pebble Beach Golf Links during the third round of the AT&T Pebble Beach Pro-Am golf tournament, in Pebble Beach, Calif. The Feb. 11-14 tournament will not have celebrities for the first time because of the COVID-19 pandemic. (AP Photo/Eric Risberg, File) 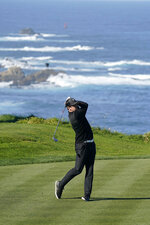 The only stars at the AT&T Pebble Beach Pro-Am this year will be the players and the golf course.

The spike in COVID-19 cases in California led organizers to cancel the pro-am portion of a tournament with a long history of entertainers, celebrities and CEOs mixing with the pros on one of the most famous and picturesque landscapes in America.

That means no antics from Bill Murray, Justin Timberlake breaking out into song while waiting on a tee box or even the latest fashion statement from rap singer Macklemore.

The tournament also is losing one of its golf courses. The 156-man field on Feb. 11-14 will be held only at Pebble Beach and Spyglass Hill. It typically includes the Shore course at Monterey Peninsula Country Club.

“I know we did the right thing," John said. “We had to come to this decision. It's still disappointing.”

Coronavirus cases in California have risen sharply since Thanksgiving, though the numbers have leveled off in recent days. Even so, new cases over the last week in the nation's most populous state are far greater than Texas and Florida.

California reported another 589 deaths Wednesday, bringing the total to 31,102 and 33,751 new infections, some of which will inevitably lead to more hospitalizations and deaths.

Pebble Beach, which already had announced it would not have spectators, is the second PGA Tour event to lose a pro-am format during competition. The American Express next week in La Quinta, California, previously announced it would have only professionals on two courses instead of three in the desert.

“This was a very difficult decision, but the right one given the recent surge in COVID-19 cases,” said Bill Perocchi, CEO of the Pebble Beach Company.

The tournament will have a pro-am on Wednesday at Pebble Beach, as other PGA Tour events have done in recent months. John said that would primarily be for the secondary sponsors that have helped the Monterey Peninsula Foundation raise more than $176 million for charitable contributions in three neighboring counties.

The tournament still plans a charity component targeting COVID-related needs such as food, health and education.

This was to be the 75th anniversary of the AT&T Pebble Beach Pro-Am since moving to the Monterey Peninsula in 1947 as the Bing Crosby Pro-Am, and celebrities have been a major part of the scene ever since.

The late Jack Lemmon, who once hit a tee shot so bad on the first hole that it crashed through a window into his own room at the Lodge, always said he would trade one of his Oscars if he could make the 54-hole pro-am cut. He never did.

Murray's antics include slinging a woman into a bunker during Saturday's round. He later won the pro-am portion of the tournament with D.A. Points. Timberlake was at Spyglass Hill in 2016 when he was handed a guitar and sang “Drink You Away” to a small but thrilled gallery before he teed off on the 16th hole.

A house above the par-5 fifth green is where fans throw a football to Aaron Rodgers or Tom Brady or whichever quarterback is in the field. Tiger Woods played for the first time in 1997 with Kevin Costner as his amateur partner.

This is what will be missing in what past champion Peter Jacobsen once described as the essence of tournament golf for its blend of sport, entertainment and corporate support. Several CEOs of Fortune 500 companies are part of the field — the waiting list is such that some can't play every year — and some hold parties to celebrating making the cut.

The tournament recently posted an Instagram bracket of the most famous moments over the years, many of whom involved the celebrities or the weather. That even includes John, who was at the volunteer party one year when he began choking on a piece of cheese. The Heimlich Maneuver was performed by none other than Clint Eastwood.

A big part of the week for John is seeing 1,600 volunteers at a party on Saturday night in which all the celebrity amateurs drop in for a brief performance.

John referred to moments like that as the “secret sauce” that makes Pebble stand out, from the fame of the golf course to the celebrities and CEOs who join PGA Tour stars. Pebble Beach winners include Woods and Jack Nicklaus, and more recently Dustin Johnson, Jordan Spieth and five-time winner Phil Mickelson.