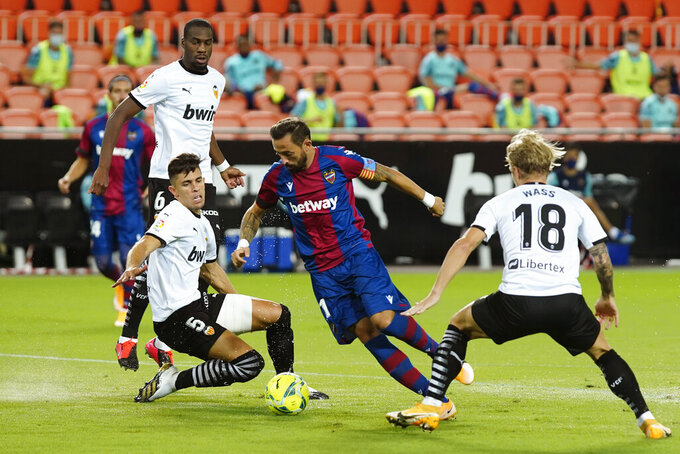 MADRID (AP) — It was a thrilling return to the Spanish league for Manuel Pellegrini. And a disappointing one for Unai Emery.

Back in the league on Sunday after long absences for both coaches, Pellegrini's Real Betis won 1-0 at Alavés — thanks to a stoppage-time goal from substitute Cristian Tello — while Emery's Villarreal couldn't get more than a 1-1 draw at home against promoted Huesca.

Emery was making his return to the league after leaving Sevilla in 2016 for stints with Paris Saint-Germain and Arsenal. Pellegrini, a former Real Madrid and Manchester City coach, had last been in the Spanish league with Málaga in 2013.

The Spanish league kicked off this weekend without its top teams. Defending champion Real Madrid, Barcelona, Atlético Madrid and Europa League champion Sevilla had their first-round matches postponed to give them more rest time after their participation in European competitions in August. Barcelona, Atlético and Sevilla also won’t play in the second round.

The season started without fans because of the coronavirus pandemic. Spain recently saw a surge in coronavirus cases and has recorded more than 29,700 confirmed deaths with COVID-19.

Villarreal, coming off a fifth-place finish last time, entered the new season amid high expectations after bringing in players such as Dani Parejo and Takefusa Kubo, but it was a struggling start against Huesca.

Villarreal salvaged the draw with a 68th-minute penalty kick converted by Gerard Moreno after video review confirmed a handball by Pablo Maffeo.

Maffeo had put the visitors ahead in the 42nd.

“I think the team did well enough to win the match,” Emery said. “After equalizing we were always very close to their area. We have things to improve but there were many things that we did well.”

Kubo, on loan from Real Madrid, came into the match as a late substitute.

Huesca is back for its second season in the top tier after being relegated immediately following its first promotion two years ago.

Tello scored four minutes into stoppage time to give Pellegrini's team the opening win at Alavés.

Tello entered the match late and scored the winner with a low left-footed shot from outside the area in Betis' first official match under the Chilean manager.

“When the substitutions work, it's easy to give credit to the coach,” Pellegrini said. “But the players who got in did very well and we were able to score the goal that gave us the victory. We knew that we could win until the very end.”

The game was originally scheduled to take place on Monday but was moved to the weekend after a scheduling dispute between the Spanish league and the Spanish soccer federation, which is against playing matches on Mondays and Fridays.

Friday's game between Granada and Athletic Bilbao also was moved to the weekend.

Vallejo scored in the 75th minute of the Valencia city derby and again in stoppage time at the Mestalla Stadium.

José Luis Morales had scored in the first and 36th minutes to put Levante ahead, but Gabriel Paulista and Maxi Gómez netted in the 12th and 39th to keep Valencia in the match.

Valencia and Levante finished near the middle of the table last season.

Real Sociedad salvaged a 1-1 opening draw thanks to a mistake by Valladolid goalkeeper Jordi Masip, who let a ball slip through after a simple free-kick into the area.

Roberto López Alcaide was credited with the 60th-minute goal at the José Zorrila stadium in Valladolid. Míchel Herrero had opened the scoring for the hosts in the 39th.