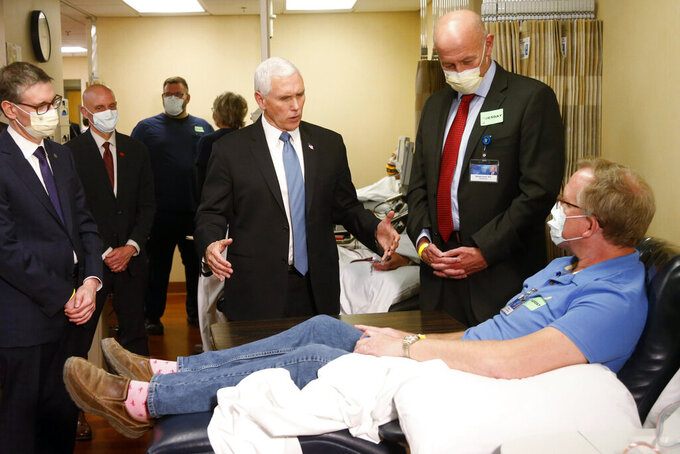 Vice President Mike Pence, center, visits Dennis Nelson, a patient who survived the coronavirus and was going to give blood, during a tour of the Mayo Clinic Tuesday, April 28, 2020, in Rochester, Minn., as he toured the facilities supporting COVID-19 research and treatment. Pence chose not to wear a face mask while touring the Mayo Clinic in Minnesota. It's an apparent violation of the world-renowned medical center's policy requiring them. (AP Photo/Jim Mone)

MINNEAPOLIS (AP) — Vice President Mike Pence visited the Mayo Clinic on Tuesday for a first-hand look at its research on COVID-19 and its plans to help Minnesota dramatically scale up its coronavirus testing as a critical step toward reviving the state's economy.

Pence, who leads the White House Coronavirus Task Force, was accompanied at the world-renowned medical center in Rochester by Gov. Tim Walz. The Democratic governor last week announced a “moonshot” partnership with Mayo and the University of Minnesota to boost the state’s capacity to 20,000 tests per day. He promised at the time that every resident with symptoms of the coronavirus could get tested once the plan is fully implemented in the next few weeks.

“I had to be here at Mayo today because when the president and I heard about the moonshot partnership, we knew that this was the right state and the right time to come and celebrate," the Republican vice president said during a roundtable discussion with Walz, top Mayo officials and researchers, and GOP U.S. Rep. Jim Hagedorn, who represents the area.

While Pence was effusive with praise for Walz, the partnership and the Mayo Clinic's leadership in fighting the coronavirus, the vice president started a storm on social media by choosing not to wear a mask, an apparent violation of the medical center's policy requiring them. It appeared from video feeds that everyone else in his vicinity did wear masks, including Food and Drug Administration chief Stephen Hahn and Dr. Gianrico Farrugia, Mayo's president and CEO.

The vice president's gratitude contrasted with the tone that President Donald Trump set recently when he tweeted “LIBERATE MINNESOTA!” in support of a protest outside the governor's residence against Walz's stay-at-home order. The president and governor spoke by phone the next day and both said they had a pleasant conversation.

Pence said the White House appreciates Walz “and the partnership that you've forged, not just with our task force, but with our president and with every element of the federal response. Governor, we see the great progress here in Minnesota. We certainly grieve the loss of more than 300 Minnesotans. ... But governor, the fact that you've made the progress that you've made, that the impacts here in Minnesota have been at the level that they've been, is a testament.”

Pence's tour also included a visit with Dennis Nelson, a Mayo employee who has recovered after catching the coronavirus in late March and donated plasma Tuesday for a study into whether antibodies in the plasma can help sick patients recover. Pence also toured a testing laboratory.

“I will leave here today inspired and encouraged that we're one step closer to reopening our country and healing our land because of the work you're doing here,” Pence said at the roundtable.