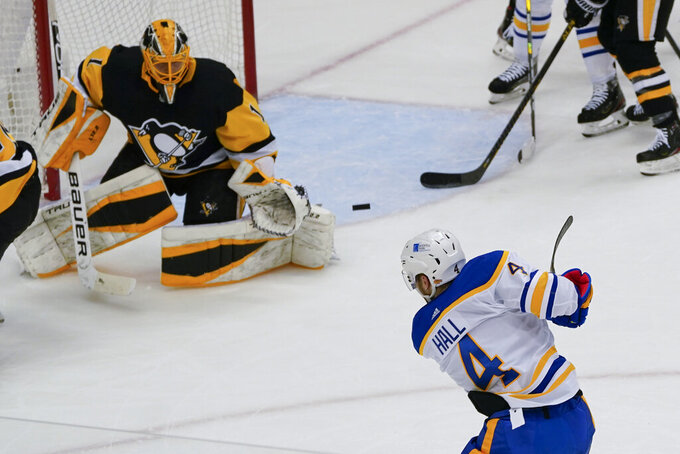 PITTSBURGH (AP) — Kevyn Adams is tasked with trying to sift through the rubble of the Buffalo Sabres' lost season.

An up-close look on Thursday night when the team's general manager was forced to serve as head coach after interim Don Granato and assistant Matt Ellis were placed in the NHL’s COVID-19 protocol a few hours before the opening faceoff provided a glimpse of just how far the Sabres have to go.

Jared McCann scored a pair of power-play goals, Casey DeSmith made 36 saves and the Pittsburgh Penguins extended Buffalo's winless streak to 16 straight with a 4-0 victory on Thursday night.

“It’s terrible to lose in any way,” Adams said. “Ice level, press box level. Player, coach. ... You want better. What I said to the guys after the game is we’re all in it. We’re in it together.”

That was about 17 months before the Penguins landed Sidney Crosby in the 2005 draft. Pittsburgh has spent most of the last 16 years as one of the NHL's elite teams — look no further than the three Stanley Cup banners hanging from the rafters at PPG Paints Arena as proof — with Crosby continuing to play at a level few can match.

The superstar dished out three assists against the Sabres to become the eighth-fastest player in league history to score 1,300 career points. Crosby reached the milestone with the secondary helper on Jake Guentzel's goal in the final minute.

Crosby called it “nice” while adding “it’s a sign I’ve been playing for a pretty long time too.”

Rookie Radim Zohorna picked up a goal on his first shot in the NHL as Pittsburgh swept a pair from the NHL's worst team with relative ease, a welcome development with forwards Evgeni Malkin, Brandon Tanev, Kasperi Kapanen and Jason Zucker out with injury.

“We’ve just got to keep moving forward here," Crosby said. "It’s not easy when you’re seeing guys each game go down. But for guys to come in the way they have and to play pretty strong games here, that’s important. We’re going to have to continue to work together and do their part.”

The numbers keep piling up for the Sabres. None of them good.

Buffalo has now been shut out more times (seven) than it has wins (six) and has been outscored 67-30 during the slide. The Sabres went 0 for 4 on the power play, and while they threw shots at DeSmith, most of them were harmless.

“They get the two power-play goals on four chances, we get zero on our four chances,” Adams said. "It’s hard in this League to score goals. Message we were pushing was simplify.”

Even fleeting moments of success don't last. Victor Olofsson appeared to put the Sabres on the board with 5:57 to play only to have it overturned on replay when a teammate was ruled offside.

The Sabres have few tradeable assets, with forward Taylor Hall being on a thin list. The veteran is on a one-year, $8 million deal and has no-move clause in his contract.

Hall, who has two goals on the season, said he has told the team he would be open to being sent elsewhere before the April 12 deadline.

The 6-foot-6 Zohorna signed to a two-way contract with the Penguins last spring after starting his career in the Czech Republic. The 24-year-old joined some heady company when he found himself alone in the left circle late in the first period, taking a pass from Anthony Angello and whipping it past Tokarski to give the Penguins the lead 17:21 into the first.

Zohorna — wearing No. 67 — joined a group of Penguins who have scored on their first shot in the NHL that includes Hall of Famer and team owner Mario Lemieux, whose No. 66 is slightly more famous. Zohorna's giddy reaction was met with glee by his new teammates.

“There wasn’t a better person to score that goal for us,” DeSmith said. "That’s the hardest I’ve seen the bench celebrate this season ... even I had my hands up.”