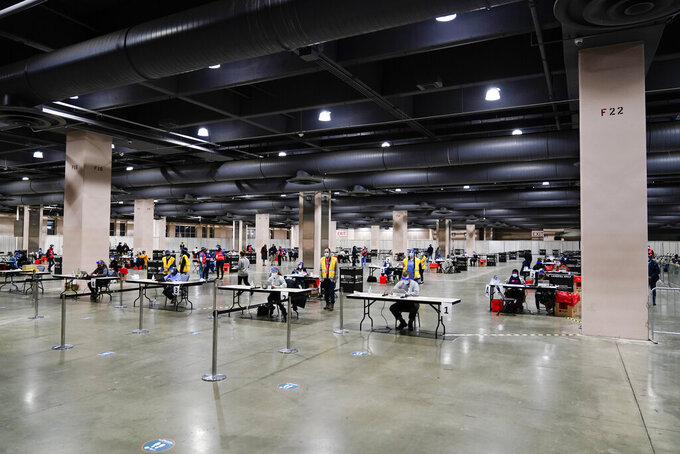 A COVID-19 vaccination site is set up at the Pennsylvania Convention Center in Philadelphia, Wednesday, Feb. 3, 2021. The clinic opened to help provide second doses of the vaccine. (AP Photo/Matt Rourke)

The Wolf administration threw cold water Wednesday on the idea of a one-stop-shop system that would help people schedule COVID-19 vaccine appointments, which some health executives are advocating as a way to manage the mad scramble for shots that has eligible residents signing up with multiple providers.

A centralized registration portal would present significant technical hurdles, and would not solve the primary challenge faced by Pennsylvania and every other state — the lack of supply, said Alison Beam, the acting health secretary.

Beam pledged to improve a state website that’s supposed to help Pennsylvania residents find their nearest COVID-19 vaccine provider, and promised better communication with hospitals and other providers amid complaints of a chaotic, uneven rollout.

Beam and other administration officials were asked to testify by majority Republicans who have slammed Democratic Gov. Tom Wolf over the state’s sluggish pace of vaccinations.

Pennsylvania ranks 35th among states in the number of shots given per 100,000 people, according to the latest data from the U.S. Centers for Disease Control and Prevention, and 40th in the percentage of allocated vaccine doses that have been administered. More than 850,000 people in Pennsylvania have gotten at least one of the two required shots.

The Health Department, which is in charge of distributing the state’s weekly allocation of vaccine, said its ability to plan has been crippled by insufficient lead time from the federal government, though other states have faced the same constraints but are doing a better job at getting shots into arms.

“We can do this better if we have visibility into what’s coming down the pike,” said Beam, who hailed the Biden administration’s recent promise to give the states more advance notice about shipments.

At the hearing, health providers described a free-for-all after the Wolf administration, following federal guidance, abruptly made people 65 and older and those with serious health conditions eligible to receive the vaccine. Until then, the focus had been on vaccinating health providers and residents and staff at nursing homes.

“Everyone 65 and over in Warren County wanted their vaccine, and they wanted it immediately,” Allen testified.

But Allen said his facility — the rural county’s sole hospital — is not equipped to handle mass vaccinations even if it had a sufficient supply of vaccine. Nor, he said, has the hospital received any indication about what role the state expects it to play in a wider vaccination effort.

“There is a void in terms of coordinated direction, authority and resources. There is no clear commonwealth-wide guidance and information available as to COVID-19 vaccine mass distribution and communication plans,” he said.

Squirrel Hill, a federally funded community health center, requested 600 doses one week — and got nothing. Another week, 200 doses showed up unexpectedly, she said.

“I’m not a logistics expert, but I know that this isn’t working well,” she said.

Kalson expressed hope that the federal government would follow through on its pledge to give the states three weeks’ notice about shipments, which should, in turn, give providers like Squirrel Hill more time to plan.

She also advocated for a centralized statewide registration system that would allow people to sign up for the vaccine a single time. Right now, she said, people are registering with multiple vaccine providers, and then failing to show up for appointments if they have already gotten the vaccine elsewhere.

That creates the potential for wasted doses, “and the general atmosphere of a competition in which the fittest and most technologically adept, who frankly aren’t the people we are really charged with serving first, get the prize,” she said.

But Beam, the health secretary, said states that have tried a centralized system did not necessarily find it to be a panacea. Boosting the number of available doses, rather, “will be what we can give constituents to afford them peace of mind and predictability,” she said.

Distribution is slowly ramping up. The state is getting about 166,000 doses this week, increasing to about 175,000 doses next week.

Beam said the state is now allocating more vaccine to providers that are getting the most shots into arms.

The Health Department is also contacting providers that have been hoarding second doses, which Beam said there’s no need to do, since the state already holds back second doses.

“If folks are sitting on inventory, it’s doing none of us any good right now,” she said.