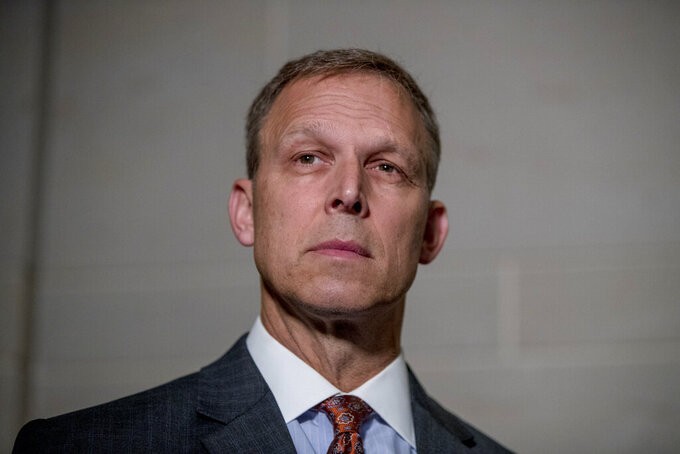 HARRISBURG, Pa. (AP) — The premier congressional races in Pennsylvania feature two Republican House members from opposite sides of the party's ideological spectrum trying to hang on for another term after recording narrow wins two years ago.

All told, the two races are on track to cost more than $30 million combined as outside money pours in to try to influence the outcome.

In the Bucks County-based 1st District in suburban Philadelphia, second-term U.S. Rep. Brian Fitzpatrick is being challenged by Democrat Christina Finello, who maintains that Fitzpatrick has not stood up to President Donald Trump.

Fitzpatrick — who has not pledged to vote for Trump — is one of just three House Republicans in the entire country running for reelection in a district Trump lost during 2016′s presidential contest.

In the Harrisburg-York seat in southcentral Pennsylvania, four-term Republican U.S. Rep. Scott Perry, owner of one of the most conservative voting records in the U.S. House, is being challenged by two-term state Auditor General Eugene DePasquale.

DePasquale has not made Trump much of an issue in the race: Voters in the district backed Trump by 9 percentage points in 2016′s election and Republicans hold a roughly 22,000-person margin over registered Democrats.

To win, DePasquale is likely to need strong support from the district's independent voters and moderate Republicans who reject Perry’s hard-line record.

Elsewhere, two Democrats — U.S. Reps. Matt Cartwright in northeastern Pennsylvania and Conor Lamb in the Pittsburgh area — are running for reelection in districts won by Trump in 2016.

That is giving Republicans hope of capturing another seat if down-ballot candidates benefit from voters in those districts again giving solid backing to Trump in his contest against former Vice President Joe Biden, the Democratic nominee.

However, the vast majority of the outside spending in Pennsylvania's congressional races — at roughly $25 million and counting, according to Federal Election Commission data — has gone to the contests for Fitzpatrick's and Perry's seats.

For Fitzpatrick, maintaining that he is independent — and independent of Trump — has been a particular emphasis since his first campaign in 2016.

The district itself has slightly more registered Democrats than Republicans, and Fitzpatrick is the only Republican congressman in Pennsylvania who routinely votes against Trump or Republican leadership.

“The far-left and far-right want to oppose me because I’m not an ideological purist,” Fitzpatrick told Levittown Now.com. “I try to be reasonable, rational, and pragmatic.”

Meanwhile, Fitzpatrick and allies have tried to paint Finello as extreme, tying her to House Speaker Nancy Pelosi, D-California, and accusing her of wanting to “defund police." That is a lie, Finello has said.

“The people of Pennsylvania need to know all the times that Brian Fitzpatrick sided with Donald Trump as they turned our backs on us, here in Bucks and Montgomery counties,” Finello said in a conference call Friday with reporters.

Trump is far less of an issue in DePasquale's effort to oust Perry.

In their last debate, on WGAL-TV in Lancaster, DePasquale even pointed to where he could work with Trump: on winning back factories and manufacturing jobs from China.

He instead has focused his attacks on Perry around health care. Perry has received support from the insurance industry after voting to repeal the Affordable Care Act and its protections for people with preexisting conditions, and supports a federal lawsuit backed by Trump that seeks to invalidate the law, DePasquale said.

"Even though there are 220,000 dead Americans because of COVID-19, that lawsuit would take away — if he has his way and the Affordable Care Act is overturned — would take away health care from tens of thousands of people right here in southcentral Pennsylvania," DePasquale said.

Perry, meanwhile, has sought to tie DePasquale to his party's more liberal figures — Pelosi, but not necessarily Biden — and tried to undermine DePasquale's independence as the state's elected fiscal watchdog.

Perry pointed out that DePasquale has benefited from fundraisers headlined by Democratic Gov. Tom Wolf, whose administration DePasquale's office audits, as well as Pelosi.

"Nancy Pelosi did a fundraiser for my opponent down in Philadelphia because he knows that that her policies and the things she believes in or not going to sell very well in this district,” Perry said.