People go hungry in Ethiopia's Tigray as conflict marches on 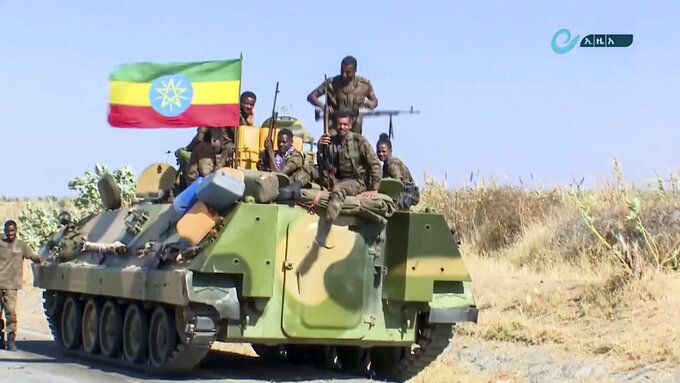 This image made from undated video released by the state-owned Ethiopian News Agency on Monday, Nov. 16, 2020 shows Ethiopian military sitting on an armored personnel carrier next to a national flag, on a road in an area near the border of the Tigray and Amhara regions of Ethiopia. Ethiopia's prime minister Abiy Ahmed said in a social media post on Tuesday, Nov. 17, 2020 that "the final and crucial" military operation will launch in the coming days against the government of the country's rebellious northern Tigray region. (Ethiopian News Agency via AP)

NAIROBI, Kenya (AP) — People are going hungry in Ethiopia’s rebellious northern Tigray region as roads are blocked, airports are closed and the federal government marches on its capital in a final push to win a two-week war. But residents are afraid to leave for fear of being killed, an internal assessment says.

Trucks laden with food, fuel and medical supplies have been stuck outside the region’s borders since the Nov. 4 announcement by Ethiopia's Nobel Peace Prize-winning Prime Minister Abiy Ahmed that a military offensive had begun in response to an attack by Tigray regional forces on a military base.

“At this stage there is simply very little left, even if you have money,” according to the internal assessment by one humanitarian group, seen by The Associated Press. Based on a colleague who managed to get out, it said people “will stay where they are, there is no place in Tigray where the situation is any different and they cannot cross over into the other regions of Ethiopia because of fear of what would be done to them.”

Banks in Tigray were closed for days, cutting off humanitarian cash transfers to some 1 million people, or one-sixth of the Tigray population. And even before the fighting, a locust outbreak was destroying crops.

Close to 30,000 Ethiopians have fled into neighboring Sudan, burdening villages that have been praised for their generosity, though they have little to give.

But many inside Tigray can’t or won’t leave, frightened by the threat of ethnic violence. Abiy’s office on Wednesday tried to ease those fears, saying its “law enforcement operation” against a Tigray regional leadership it regards as illegal is “primarily” targeting members of that ruling circle.

“The people of Tigray will be the first to benefit," the statement said, as senior government officials vow the fighting will end within days. Abiy’s government accuses the Tigray government of damaging bridges and digging up roads leading to its capital, Mekele, to slow the march of federal forces.

Hundreds of wounded people have been treated so far, the International Committee of the Red Cross said after visiting a handful of health centers in the Tigray and Amhara regions. More than 400 have been treated in one hospital in the Amhara city of Gondar, including “large numbers of critically injured."

“At the beginning, most of the wounded were fighters. As days went ahead, we started seeing more wounded civilians exiting” the Tigray region, the ICRC's Daniel O'Malley said in an interview, adding that combatants still make up the majority. As federal forces move eastward along the front line, more wounded are coming from there.

“For the whole country, this is something terrible,” he said.

Electricity is out in the Tigray capital, and there is limited water. Hospital beds, supplies for diabetic care and dialysis, even blankets, are urgently needed, the ICRC said.

“It is unclear why all basic services to Tigray need to be cut in order to arrest, if arrest is warranted, the leadership" of the region, the head of the Tigray Friendship Liaison Office, Wendimu Asamanew, said in a statement.

Ethiopia’s federal government promised a rapid end to the fighting from nearly the start. Now humanitarian groups, experts and even the United States government are showing signs of desperation.

“We do not know if there will be additional U.N.-coordinated relocation efforts out of Tigray,” the U.S. Embassy said in a brief statement Tuesday after the U.N. said some 200 foreigners had been evacuated. “U.S. citizens who cannot depart Tigray safely are advised to shelter in place.”

Well over 1,000 citizens of the U.S. and other countries had been said to be trapped, along with the bulk of the Tigray region’s residents. The Tigray regional government says more than 100,000 civilians have been displaced and seeks urgent humanitarian assistance.

“Humanitarian workers should be given safe passage to provide assistance to vulnerable groups,” U.S. Secretary of State Mike Pompeo said in a statement. “Communications services in the Tigray region should be restored immediately."

U.N. humanitarian chief Mark Lowcock said, “I call for full access to reach people in need wherever they are.” Even before the conflict almost 1 million in the Tigray region needed humanitarian assistance, he said.

His office has set aside $20 million for "anticipatory action to fight hunger in Ethiopia,” citing threats including "civil unrest, growing insecurity, locust infestations, and the economic fallout of the COVID-19 pandemic, which includes declining incomes and rising inflation.”

Even famine is a possibility in Tigray, researchers warned in The Conversation, a website for researchers. Some 80% of people are subsistence farmers and the fighting affects the upcoming harvest, they wrote.

The locust outbreak, the region’s worst in decades, has “destroyed vast areas of cropped land and numerous swarms remain active.”

The locust outbreak is so serious that even neighboring Eritrea, which has been almost silent on the conflict despite the Tigray forces firing rockets at its capital, speaks relatively openly about the insect invasion.

This time of year was already the “hunger gap” for many, they said: “We fear that the grain baskets will remain empty because of the conflict.”

One of the researchers, Jan Nyssen, told the AP that “I know there are stores of the (U.N. World Food Program) inside Tigray, but they were there for a normal, quote-unquote, disaster.”

Restocking such warehouses remains impossible, the U.N. said in an update.

Nyssen worries the locusts will pose the worse threat in the end. As of Nov. 3, the day before fighting erupted, swarms had reached as far as Mekele and were expected to move north, further into the region.

He also recalled the hunger that swept through Tigray in the 1980s as its leaders also fought the federal government. Back then, Ethiopia's regime tried to hide the suffering, he said. “Nowadays, you can’t hide it that long.”