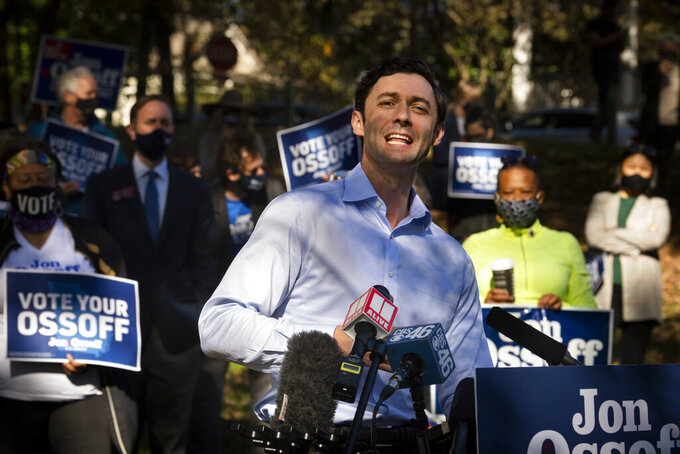 Georgia Democratic candidate for U.S. Senate Jon Ossoff speaks to the media as he rallies supporters for a run-off against Republican candidate Sen. David Perdue, as they meet in Grant Park, Friday, Nov. 6, 2020, in Atlanta. (AP Photo/John Amis)

ATLANTA (AP) — Republican U.S. Sen. David Perdue and Democrat Jon Ossoff will face off in a Jan. 5 runoff in Georgia for Perdue’s Senate seat, one of two high-profile contests in the state that could determine which party controls the upper chamber.

Libertarian candidate Shane Hazel was able to get enough votes so that neither Perdue nor Ossoff cleared the 50% threshold needed for an outright win.

Thousands of absentee ballots and in-person votes cast early needed to be counted after Election Night passed, forcing a long and tense wait before the race could be called.

Democrat Raphael Warnock and Sen. Kelly Loeffler, the Republican appointed last year after Sen. Johnny Isakson retired, will also compete in a runoff on the same day. The twin races in Georgia are likely to settle which party controls the Senate.

Nationally, the Senate stands split at 48-48. But Republicans lead uncalled races in Alaska and North Carolina, so the ultimate balance is likely to come down to what happens in the Georgia runoffs.

The race between Ossoff and Perdue, a close ally of Trump, has been characterized by sharp attack ads but relatively moderate political positions. Both candidates steered toward the middle, vying for a state Trump won handily four years ago, but where swaths of suburbia have shown signs of disillusionment with the president.

Perdue has often focused his message on the economy, touting pre-pandemic job growth and his business experience before taking office. He has sought to cast Ossoff as backing a “radical socialist agenda.”

Ossoff, meanwhile, has hammered Perdue's response to the coronavirus pandemic and decried Republican efforts to overturn the Affordable Care Act in the middle of the public health crisis.

Democrats haven't won a U.S. Senate race in Georgia in two decades, but Republican dominance has been slipping. Democrat Stacey Abrams narrowly lost the race for governor in 2018, and Biden held a slim lead over Trump on Friday night in this year's race for the White House, though The Associated Press has not yet called the race.

Perdue’s campaign is already portraying the runoff election as a last stand for Republicans to hold the Senate majority.

“The stakes in this election could not be higher: A vote for Jon Ossoff is a vote to hand power to Chuck Schumer and the radical Democrats in Washington,” Perdue campaign manager Ben Fry said in a statement Friday. “Georgians won’t let that happen.”

Ossoff spoke at a news conference in Atlanta on Friday morning, surrounded by supporters waving signs that read, “Vote your Ossoff.”

Asked about Democrats' weak performance in recent runoff elections in Georgia, Ossoff replied: “This is a different state. Georgia has become younger and more diverse every day of the last decade. And the effort that has gone into registering voters, empowering voters is unprecedented, unmatched anywhere in the country.”

Paa Coss, a 39-year-old who said she moved to Atlanta 10 years ago, came to support Ossoff wearing a shirt covered in a collage of pictures of Biden.

“It’s so exciting,” Coss said. “I just see this blue wave happening — the changing demographics in my neighborhood.”

“A lot of my friends from out of town are texting me. All eyes are on Georgia right now, which is great,” she added.