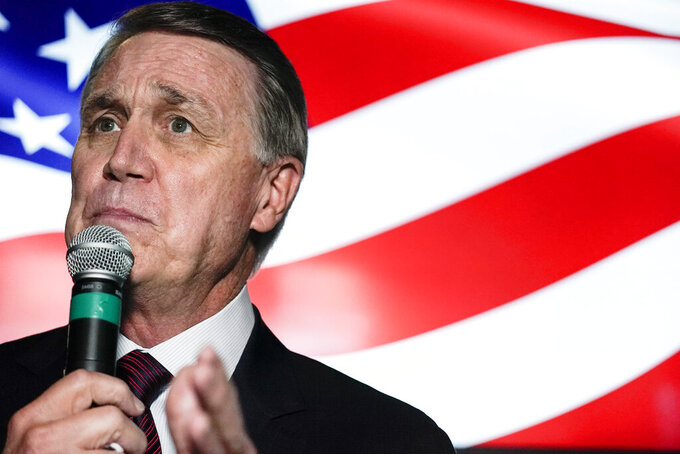 SAVANNAH, Ga. (AP) — In 2014, David Perdue introduced himself to Georgia voters as a corporate executive capable of bringing pragmatism to a Congress depicted in his first TV ad as a bunch of diaper-clad, crying babies.

“Help me change the childish behavior up there," he asked voters in his winning campaign for U.S. Senate.

Since then, the Republican who promised level-headed maturity in Washington has been swept up in the tornado of Donald Trump's White House. Perdue became one of the Senate's chief defenders of a president known for schoolyard insults and who still refuses to accept his own election defeat.

Now Perdue is at the center of one of the most intense Senate races in recent memory, fighting for reelection in a Jan. 5 runoff election that will determine which party controls the Senate. It's an unexpected role for a politician described even by close allies as someone who doesn't stir strong passions.

“He’s not flamboyant,” said Alec Poitevint, a Georgia businessman and GOP activist who serves as Perdue’s campaign chairman. “But one thing is, he’s consistent. He never changes.”

Perdue fell just short of the 50% threshold he needed to defeat Democrat Jon Ossoff outright on Nov. 3. Fellow Republican Sen. Kelly Loeffler is in a runoff against Democrat Raphael Warnock. If both Perdue and Loeffler lose, Democrats will control the Senate in the new Congress.

Perdue's runoff campaign has focused on ensuring Trump's base shows up to vote again. The senator has backed the president's failed effort to toss out millions of votes and overturn Democrat Joe Biden's victory.

When the president came to Georgia this month for the stated purpose of firing up support for the Republican Senate candidates, Perdue could barely get a word in. When his turn at the microphone came, the senator had to plead for a chance to speak amid the crowd's roars of “Fight for Trump!”

When Perdue first ran for the Senate, the politician of the family was his first cousin: former Georgia Gov. Sonny Perdue, whom Trump would later pick as his agriculture secretary.

David Perdue ran on his executive experience. As CEO of Reebok in 2001, he was credited with helping revive the footwear brand. Perdue moved to Pillowtex, but couldn't save the struggling textile company from going under in 2003. He got mixed results leading Dollar General, where rapid expansion doubled stock prices but later hurt profits. Perdue resigned in 2007 as shareholders sold the retailer to private owners.

After being the boss in the private sector, and running on changing the way Congress does business, Perdue accepted his role as a junior lawmaker and mostly worked behind the scenes, said Jack Kingston, a former Georgia congressman and Republican who lost the 2014 Senate primary to Perdue.

“He came to town with this knowledge that it’s a system of seniority, it’s a system of consensus,” Kingston said. "That you can’t just go in there and say, `I’m a CEO of a Fortune 500 company and I want this done yesterday.'”

Perdue's profile rose as he showed an unflinching willingness to defend Trump even before he'd won the presidency. After the “Access Hollywood” recording of Trump boasting about groping women surfaced in the 2016 campaign, Perdue acknowledged that “this guy's no choir boy." Still, he said the nation needed an outsider like Trump.

“We have a person in the White House who is a person of destiny," Perdue told Capitol Hill reporters in 2017, "coming in at an important time when we need to break some eggs in Washington.”

Supporters say Perdue has delivered for Georgia. He helped secure funding for a $973 million expansion of Savannah's busy shipping channel as well as $3 billion in disaster aid for Georgia and Florida farmers who had crops devastated by Hurricane Michael in 2018.

Some question whether Perdue used his office for personal gain. Senate financial disclosures show stock trades during the early days of the coronavirus pandemic allowed him to avoid steep losses and reap big gains.

During an October debate, Ossoff accused Perdue of downplaying the health crisis while “looking after your own assets.” Perdue spokesman John Burke has said the Justice Department, the Securities and Exchange Commission and the Senate Ethics Committee all examined Perdue's trading and found no grounds for criminal charges or ethics violations.

“It looks terrible if people are coming out of sessions of Congress and getting wealthy on their own at a time when everyday Americans are suffering,” Rotman said.

Perdue announced in May that his financial advisers would no longer trade individual stocks.

One of the Senate's wealthier members, Perdue lives in a gated area of Sea Island, a resort getaway that ranks among Georgia's richest communities. While campaigning, he projects a more down-home image, often wearing a blue jean jacket or posting social media photos from a casual breakfast at Waffle House.

Aside from rallies with Trump and Vice President Mike Pence, Perdue has sought to avoid the media spotlight. He ducked the runoff's only debate, leaving Ossoff to face an empty podium. Bus tour stops haven't been made public, with invitations limited to loyal supporters.

Perdue declined an interview request from The Associated Press.

“The man didn’t build any relationships other than with the donor class,” said Murphy, now an independent who also voted for Biden. “You have a civic responsibility. And I think he’s totally failed at carrying out that function.”

If reelected, would Perdue's second term be his last? He has co-sponsored proposals to impose term limits, including two terms for senators, that made little headway. Burke said Perdue plans to continue that fight, but he did not answer whether Perdue would limit himself if not required by law.

“As far as I know, two terms is all he will be there,” campaign chairman Poitevint said. “He’s very passionate about term limits. Six years in Washington hasn’t changed that.”