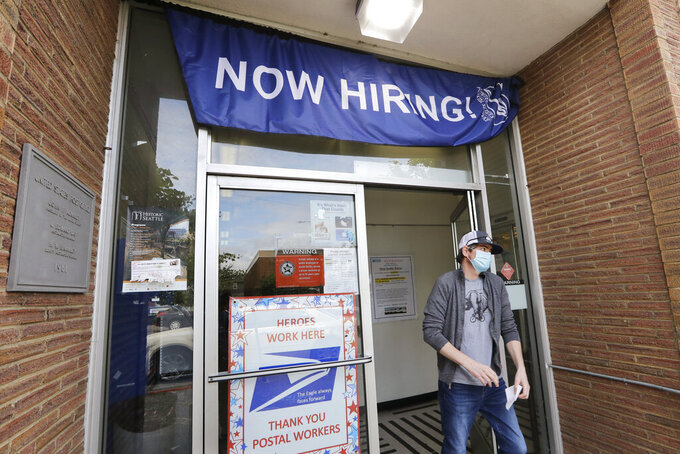 FILE - In this June 4, 2020, file photo, a customer walks out of a U.S. Post Office branch and under a banner advertising a job opening, in Seattle. The U.S. government will issue its latest snapshot Thursday, June 18, of the layoffs that have left millions unemployed but have slowed as businesses have increasingly reopened and rehired some of their laid-off workers. (AP Photo/Elaine Thompson, File)

WASHINGTON (AP) — Three months after the viral outbreak shut down businesses across the country, U.S. employers are still shedding jobs at a heavy rate, a trend that points to a slow and prolonged recovery from the recession.

The number of laid-off workers seeking unemployment benefits barely fell last week to 1.5 million, the government said Thursday. That was down from a peak of nearly 7 million in March, and it marked an 11th straight weekly drop. But the number is still more than twice the record high that existed before the pandemic. And the total number of people receiving jobless aid remains a lofty 20.5 million.

The figures surprised and disappointed analysts who had expected far fewer people to seek unemployment aid as states increasingly reopen their economies and businesses recall some laid-off people back to work. The data also raised concerns that some recent layoffs may reflect permanent losses as companies restructure their businesses, rather than temporary cuts in response to government-ordered closures.

The report is “telling us that the scars from the job losses in the recession will be longer-lasting than we expected,” said Gregory Daco, chief U.S. economist at Oxford Economics.

At the same time, Thursday's figures may have raised as many questions about the state of the job market as they answered. Jobless claims generally tracks the pace of layoffs. But they provide little information about how much hiring is occurring that would offset those losses. In May, for example, employers added 2.5 million jobs — an increase that caught analysts off-guard because the number of applications for unemployment aid was still so high.

Some likely factors help explain why applications for jobless benefits remain so high even as businesses increasingly reopen and rehire some laid-off workers. For one thing, many businesses that deal face-to-face with customers — from restaurants and movie theaters to gyms and casinos — remain strictly limited to less-than-full capacity. Some of those establishments are still cutting jobs as a result.

Casinos in Louisiana, for example, can open at half-capacity. But Boyd Gaming Corp., which operates five casinos in the state, has informed 1,500 of its workers that with financial losses mounting, they could be laid off by early July.

And in some especially hard-hit sectors, like the hotel and travel industries, corporations are now slashing white-collar workers because their business remains far below pre-pandemic levels. This week, Hilton Hotels said it would cut 22% of its corporate global workforce — about 2,100 jobs.

Although consumer spending, the primary driver of the U.S. economy, is recovering from its low in mid-April, it remains far below its pre-pandemic level, according to data compiled by Opportunity Insights. That trend may be forcing changes at some companies that managed to withstand the initial shutdowns. AT&T, for instance, said this week that it plans to cut 3,400 technical and clerical workers over the next few weeks. It also plans to permanently close 250 of its Mobility and Cricket Wireless stores.

“We’re starting to see more job losses among higher-skilled positions that are harder to recall," said Brad Hershbein, a senior economist at the Upjohn Institute.

And some states may still be clearing backlogs of applications from weeks or months ago.

Corinne Cook, who lives in Kissimmee, near Orlando, just received her first unemployment payment last week, after being laid-off from her job in mid-April. Cook, 28, moved to the area in September for an 18-month contract position as a 3-D modeler for Walt Disney, a job involving sculpting character prototypes that were printed on 3-D printers. She lost her job when the parks closed down.

She's receiving the minimum state unemployment benefit from Florida, $125 a week, because the state has no record of her prior earnings in New Jersey, even though she said she has uploaded, mailed and faxed her documents from her job there. If her previous earnings were properly credited, her state benefits would more than double. She is grateful, though, for the extra $600 in federal unemployment benefits, which have allowed her to pay some bills.

Dealing with the state's bureaucracy "was very stressful,” she said.

Daco of Oxford Economics said he still expects the June jobs report, to be released in early July, to show another hiring gain. But these figures will be particularly hard to forecast. Tens of millions of people may be flowing in and out of work each month, he noted, making it much more difficult to forecast where the job market is headed.

The jobs report for May had suggested that the damage might have bottomed out. The unemployment rate declined from 14.7% to a still-high 13.3%.

Even so, nearly 21 million people are officially classified as unemployed. And including people the government said had been erroneously categorized as employed in May and those who lost jobs but didn’t look for new ones, 32.5 million people are out of work, economists estimate.

Thursday’s report showed that an additional 760,000 people applied for jobless benefits last week under a new program for self-employed and gig workers that made them eligible for aid for the first time. These figures aren’t adjusted for seasonal variations, so the government doesn’t include them in the official count.

Other recent data have been more encouraging and suggest that the lifting of shutdown orders has sparked some pent-up demand from consumers. Most economic gauges remain far below their pre-pandemic levels, though, and some analysts question whether the recent gains can be sustained, especially if the virus were to surge back.

Last month, retail and restaurant sales jumped nearly 18%, the government said Tuesday, retracing some of the record plunges of the previous two months. Still, retail purchases remain a sizable 6% below their year-ago levels.

“Recently, some indicators have pointed to a stabilization, and in some areas a modest rebound, in economic activity,” Federal Reserve Chairman Jerome Powell said Tuesday in testimony to a Senate committee. Yet “until the public is confident that the disease is contained, a full recovery is unlikely.”