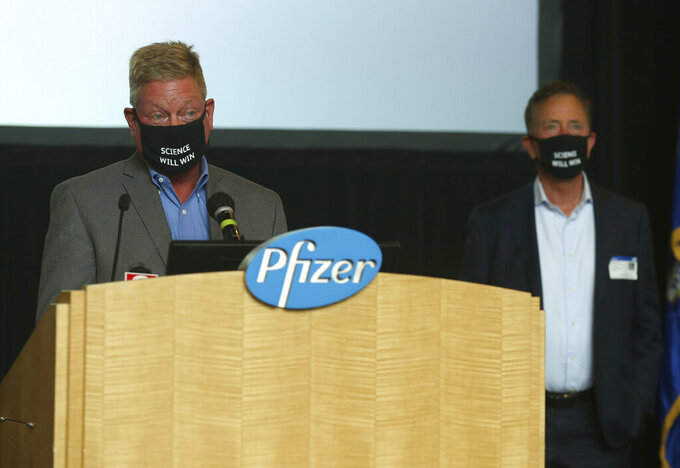 John Burkhardt, left, senior vice president of drug safety R&D and head of the Pfizer Groton site speaks at a press conference at Pfizer Groton on the companies research to develop a vaccine for COVID-19, as Connecticut Gov. Ned Lamont stands by to answer questions Wednesday, July 22, 2020, in Groton, Conn. The federal government has agreed to pay nearly $2 billion for 100 million doses of a potential COVID-19 vaccine being developed by the U.S. drugmaker and its German partner BioNTech. (AP Photo/Stew Milne)

GROTON, Conn. (AP) — Scientists and other staff at Pfizer Inc.'s Groton campus are playing a key role in the drug company's fast-tracked and promising efforts to develop a vaccine for the novel coronavirus, as well as an antiviral medication to treat patients who've contracted COVID-19, a top company executive said Wednesday.

People are working around the clock on pre-clinical and clinical safety studies for the vaccine and engineering of the nanoparticle that's the basis for the vaccine. Analysis of that engineering work, which is also being conducted in Groton, is needed for the clinical trials that could happen as soon as the end of July, and ultimately manufacturing.

Additionally, staff in Groton are working on all the necessary regulatory filings, said John Burkhardt, the Groton labs site director and vice president of global drug safety research and development. Nearly 3,000 people work at the site.

Pfizer also has employees in New Haven, some of whom are supporting the vaccine and antiviral work.

If the ongoing studies are successful, Pfizer and its partner BioNTech hope to seek some form of regulatory approval as early as October 2020 for the vaccine, which is currently being studied on adults. Meanwhile, Pfizer hopes to have the antiviral medication ready for clinical trials in August or September.

“This is research and development. We are optimistic. We are hopeful,” said Burkhardt, who also warned that “things can go wrong that can slow a project.”

Health and Human Services Secretary Alex Azar announced Wednesday that the Trump administration will pay Pfizer nearly $2 billion for a December delivery of 100 million doses of the COVID-19 vaccine that Pfizer is developing.

Burkhardt said in order for the 100 million doses to be delivered to the federal government, the clinical trials need to be safe and show effectiveness. The vaccine will also require regulatory approval. Under the agreement, the U.S. could buy another 500 million doses. Burkhardt said that will depend on the speed Pfizer can ultimately manufacture the vaccine, which he described as a “highly technical” undertaking.

Americans will receive the vaccine for free, Pfizer and BioNTech said.

“Pfizer is one of the leading horses in this race right now. There may be several winners. We need several winners,” said Democratic Gov. Ned Lamont, who appeared with Burkhardt at a news conference in Groton. “This is at warp speed and it's remarkable what they've been able to do.”

Lamont warned that Pfizer's vaccine is “not the pot of gold at the end of the rainbow,” but "it gives us hope that science is going to lead us the way past this."

Lamont, who has been critical of the Trump administration's handling of testing and personal protective equipment during the pandemic, on Wednesday praised the federal government for being “really proactive and thoughtful” when it has come to vaccines and therapeutic treatments for COVID-19.

“A little credit where credit is due,” he said. “They’ve taken the lead. They put in place incentives ... We are going to have a national stockpile and maybe, before the end of this year, we’re going to have billions of doses.”

Lamont also lauded Pfizer for taking a large financial risk and investing in a COVID-19 vaccine. Unlike some other companies, Pfizer decided not to receive federal funding for its vaccine development costs.

For the second day in a row, Lamont's administration reported there were no new COVID-associated deaths in Connecticut. To date, there have been a total of 4,406. Meanwhile, more than 48,000 people have tested positive in the state, an increase of 127 since Tuesday. Hospitalizations increased by one patient, for a total of 63.

A dozen unionized nursing home workers have so far died during the pandemic from COVID-associated causes.

The union said it plans to “occupy” the south side of the state Capitol when members of the House of Representatives meet in a special legislative session to vote on four bills, none of which pertain to long-term care facilities. The state Senate is scheduled to vote on Tuesday.

The union members won't be alone. Protests are also planned concerning a police accountability bill that lawmakers are expected to consider. State Capitol Police said they'e expecting large crowds on and around the Capitol grounds.

If Connecticut lawmakers ultimately agree to expand eligibility for absentee ballots in the November election and allow COVID-19 to be an excuse, disability rights advocates say accommodations need to be made for people with disabilities.

Advocates on Wednesday sent a letter to legislative leaders and the governor, voicing support for the vote-by-mail concept while calling for changes to the bill that would create an accessible online absentee ballot application and make assistive technology available so voters with disabilities can independently fill out their ballots at home.