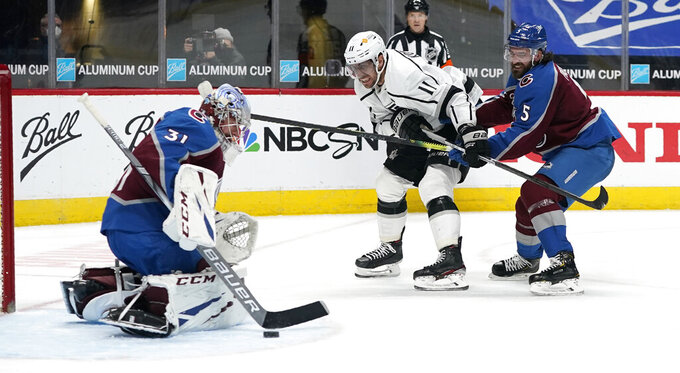 DENVER (AP) — Philipp Grubauer made 27 saves, Andre Burakovsky and Nazem Kadri each had a goal and an assist and the Colorado Avalanche beat the Los Angeles Kings 4-1 on Sunday.

Colorado has more than 40 shots on goal in the last three games but scored just six goals, one into an empty net.

“We’re generating offense on rebounds and getting some good looks,” Kadri said. “That’s the identity of our team, our speed and possession. With the talent we have in this dressing room, we haven’t been scoring at the rate we’re used to, but that’s going to happen. You don’t lose that touch.”

Grubauer nearly had another shutout before Kurtis MacDermid ended the bid early in the third period.

Cal Petersen made 37 saves for the Kings after setting a career high with 44 on Friday night.

“Outstanding, very calm,” Los Angeles coach Todd McLellan said about Petersen. “Gave us a chance to steal one the other day. Today we played a better game but we’re not at their level yet. But he was what we thought he could be and what he has been all year. He was outstanding.”

The Kings canceled their practice Saturday due to several players not feeling well. It was not COVID-19 related, according to the team, but McLellan said some were not 100% Sunday.

“It’s just life. Stuff happens, it’s ever changing, especially this year with all that’s going on in the world,” defenseman Mikey Anderson said. “We’re trying to ready for the unexpected. When you battle those things it’s something you try and get through. It’s not always easy but at the same time it’s not an excuse to not show up and play.”

Colorado kept up its recent trend, outshooting the Kings 20-4 in the first period and took a 1-0 lead midway through when Kadri beat Petersen from the slot at 11:05.

Los Angeles turned up the pressure in the second period with several good scoring chances but couldn’t get one by Grubauer.

Burakovsky made it 2-0 when he tipped a centering pass from Kadri over Petersen’s shoulder at 14:05. It was his sixth of the season.

“I just saw Naz in the corner, he was open and I was trying to get to the net,” Burakovsky said of his goal. “Naz had really good game. Our line’s been finding our mojo a little bit and been really good lately. We just have to keep that up.”

Just 3:04 later, Donskoi crashed the net and knocked in a rebound that rolled off Petersen to make it 3-0. MacDermid’s second goal of the season 6:07 into the third was the Kings’ only goal in the two games.

MacKinnon’s goal into an empty net with 3:19 left sealed it.

Notes: The game was originally scheduled to start at 7 p.m., but was moved up to 3:30 p.m. because of a major snowstorm forecast for the weekend. Snow started falling Saturday and became more intense Sunday. Los Angeles stayed in Denver overnight because of the storm. ... Kings F Dustin Brown was scratched with an upper-body injury. Alex Iafallo was back in the lineup after missing Friday’s game with a non-covid illness. He assisted on MacDermid’s goal.