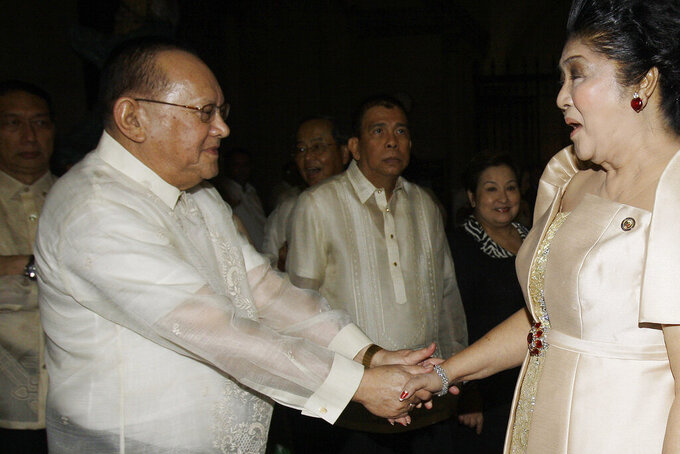 MANILA, Philippines (AP) — Philippine tycoon Eduardo “Danding” Cojuangco Jr., a key ally of the late dictator Ferdinand Marcos and a low-key businessman who led a food and beverage empire that produced San Miguel beer, has died. He was 85.

Cojuangco had a net worth of $1.1 billion, according to Forbes’ list of the world’s billionaires, with interests in cement-manufacturing, orchards, a stud farm and Australian wineries, aside from San Miguel. San Miguel, one of Southeast Asia’s largest conglomerates, with a workforce of more than 28,000 people, has ventured into fuel and oil, power and infrastructure.

Aside from business, Cojuangco delved into politics and sports, and owned three teams in the Philippine Basketball Association, Panelo said.

“His impact on many other areas of Philippine life — sports, philanthropy — add to his rich and enduring legacy,” San Miguel said in a statement.

President Rodrigo Duterte’s spokesman, Harry Roque, expressed deep sadness over Cojuangco’s death and cited San Miguel’s contribution to the economy and help in dealing with the coronavirus pandemic in the country.

But Cojuangco had also been mired in controversy.

He fled from the Philippines when Marcos was overthrown by an army-backed “people power” revolt in 1986. During his years in exile, he was known to have traveled to the United States and Australia, where he bred thoroughbred racehorses.

Cojuangco had been linked to the 1983 assassination of a key anti-Marcos politician, former Sen. Benigno Aquino Jr., but the allegation has never been proven and Aquino’s family later said he was not involved. The brazen killing of Aquino while in military custody at Manila’s international airport sparked massive street protests that culminated in a failed coup and the 1986 uprising that toppled Marcos, his family and cronies, including Cojuangco.

Aquino’s wife, Corazon Aquino, who was Cojuangco’s estranged cousin, was hailed as a democracy icon amid the anti-Marcos protests and succeeded Marcos.

Cojuangco had also been accused of involvement in the misuse of large amounts of coconut levy funds during the Marcos years that were intended to develop the country’s coconut industry. He has denied any wrongdoing and has never been convicted amid allegations of illegally amassing wealth during the Marcos era.

In the 1960s, Cojuangco served as governor of the northern Philippine province of Tarlac, the base of the Cojuangco clan, which has interests in sugarcane plantations. After returning to the Philippines following Marcos’s downfall, he ran for president in 1992 under the Nationalist People’s Coalition but lost, although the political party he founded has remained an influential political bloc.

Cojuangco backed the successful presidential bid of Joseph Estrada in 1998, the year he regained the chairmanship of San Miguel. Estrada was forcibly removed amid massive protests halfway into his six-year term and was convicted of plunder years later.