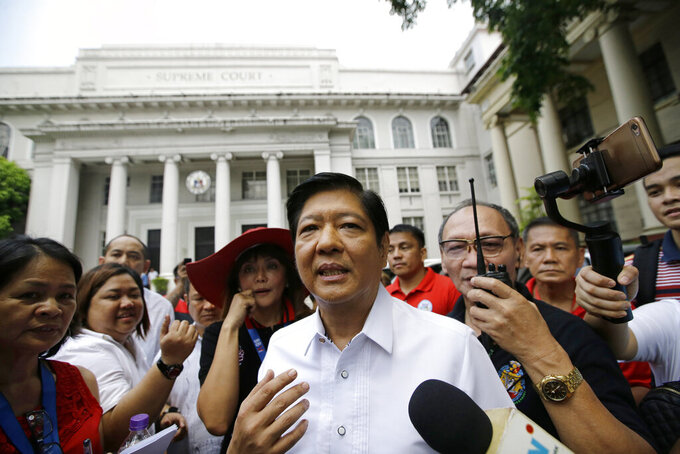 FILE - In this April 2, 2018, file photo, former Senator Ferdinand "Bongbong" Marcos Jr. talks to reporters in front of the Philippine Supreme Court in Manila, Philippines The Philippine Supreme Court has dismissed an election protest by the son of the late dictator Ferdinand Marcos, thwarting his attempt to overturn his narrow defeat in the 2016 vice presidential election in what could have been a stunning political comeback. The 15-member court, which voted as an electoral tribunal, unanimously rejected the protest filed by Ferdinand Marcos Jr. after he lost to opposition leader Leni Robredo in the vice presidential race and claimed that he was cheated, court spokesperson Brian Hosaka said Tuesday, Feb. 16, 2021.(AP Photo/Aaron Favila, File)

MANILA, Philippines (AP) — The Philippine Supreme Court has dismissed an election protest by the son of the late dictator Ferdinand Marcos, thwarting his attempt to overturn his narrow defeat in the 2016 vice presidential election in what could have been a stunning political comeback.

Marcos Jr. did not immediately comment on the court decision. Robredo expressed relief and thanked her supporters, lawyers and the justices “for their fairness and resolve.”

“Even if they tried to tarnish the legitimacy of my mandate, the trust remained,” Robredo said at a news conference. She asked everybody “to put the rancor behind us” and press ahead with efforts to address poverty worsened by the coronavirus pandemic.

Marcos Jr. lost to Robredo, a human rights lawyer, by more than 263,000 votes in the race for the vice presidency, the highest political office that was close to being captured by the family of the ex-dictator, who was ousted in an army-backed “people power” revolt in 1986. The Marcoses fled to Hawaii, where the ousted leader died three years later while facing massive human rights and corruption charges.

The dictator’s widow, Imelda Marcos, and her children eventually returned to the Philippines, where she ran and lost in the 1992 presidential election. Marcos Jr. won a Senate seat in 2010 and then set his eyes on the vice presidency in 2016.

In a court-approved recount of votes in three provinces selected by Marcos Jr., Robredo’s lead increased by about 15,000 votes in one key setback in his protest. Robredo, who won the vice presidency with more than 14 million votes, asked the court to dismiss Marcos’ protest.

Presidential legal counsel Salvador Panelo said everybody must abide by the court's decision. “There is always another election to vindicate one's loss or validate forever one's rejection by the voting population," he said.

In the Philippines, the president and vice president are elected separately. Robredo has come under attack by President Rodrigo Duterte for her criticism of his bloody crackdown on illegal drugs and his sexist remarks.

Duterte has publicly allied himself with the Marcoses and allowed the burial of the former dictator in the country’s Heroes’ Cemetery in 2016, infuriating supporters of the 1986 revolt that ousted Marcos.

Robredo opposed Duterte’s decision to bury the late dictator in the sacred grounds, saying the Marcoses have refused to apologize for the atrocities committed during Marcos’ strongman rule.