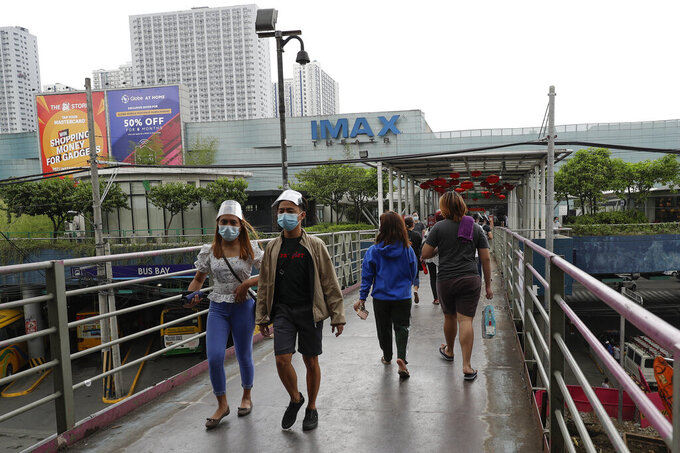 People wearing face mask and shield to prevent the spread of the coronavirus walk outside a mall that houses movie theaters in Quezon City, Philippines on Monday, Feb. 15, 2021. The Philippine government's approval for reopening many movie theaters, video game arcades and other leisure businesses closed since last year was postponed at least another two weeks after mayors feared it will bring new coronavirus infections. (AP Photo/Aaron Favila)

MANILA, Philippines (AP) — The Philippine government's approval of the reopening of many movie theaters, video game arcades and other leisure businesses shut since last year was postponed at least another two weeks after mayors feared it will bring new coronavirus infections.

The easing of restrictions in the capital and other regions under moderate restrictions was planned after Manila was hit by one of the worst pandemic-wrought recessions in the region.

The government also will allow larger crowds inside places of worship in Asia’s largest Roman Catholic nation, allowing 50% of their capacity, up from 30%.

Mayors under the Metro Manila Development Authority expressed apprehension over the reopening of cinemas and video game arcades. Philippine officials said mayors and health officials should draw rules to ensure safety amid the easing of quarantine restrictions in more public areas, including museums, libraries, parks and historical sites.

“This is a very problematic proposition. This might bring a surge in our COVID cases,” Marikina city Mayor Marcelino Teodoro told ABS-CBN News, adding that mayors in the capital region were not consulted by the national government on the reopening of cinemas.

Teodoro said he would order movie houses to remain shut in his city.

Manila Mayor Isko Moreno told The Associated Press that he and other mayors will meet government officials to discuss the reopening of cinemas, which he welcomed as long as health safeguards are put in place.

The former TV and movie actor said movie house staff should be tested for the virus, and he added that reopening theaters would help encourage movie companies produce films again.

“We want the economy reopened to the maximum possible and in the most responsible way possible,” he said by telephone.

Presidential spokesman Harry Roque said in a televised news briefing that the reopening of movie houses would be postponed from Monday to March 1 in the capital region to allow consultations and more time to craft safety guidelines. Movie houses in regions which have drafted health guidelines could reopen right away, Roque said.

Roque said a government body dealing with the pandemic and mayors “are not engaging in a cockfight.” “We agree that the economy should gradually be reopened because more people now are going hungry than those who get sick or die due to COVID.”

The Philippines has reported nearly 550,000 confirmed COVID-19 cases, with more than 11,500 deaths, the second highest in Southeast Asia. The government has faced criticisms for failing to immediately secure COVID-19 vaccines despite being a pandemic hotspot.

President Rodrigo Duterte has said wealthier Western countries, where the vaccines originate, have purchased massive vaccine doses for their citizens, depriving poorer countries like the Philippines of early supplies. Roque said initial batches of COVID-19 vaccine, including about 600,000 doses donated by China, would arrive in the Philippines later this month.