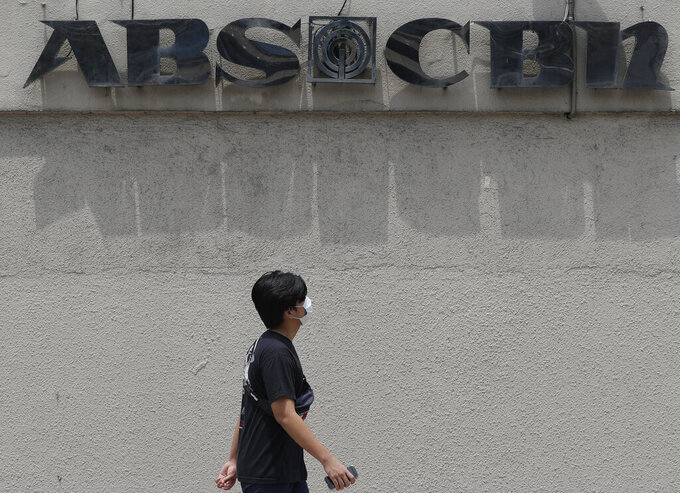 A man wearing a mask passes by the headquarters of broadcast network ABS-CBN Corp. on Wednesday May 6, 2020 in Manila, Philippines. Philippine church and business leaders expressed alarm Wednesday over a government agency’s shutdown of the country’s largest TV and radio network, which has been a major provider of news on the coronavirus pandemic. (AP Photo/Aaron Favila)

MANILA, Philippines (AP) — Alarm over a Philippine government agency’s shutdown of the country’s largest TV and radio network heightened Wednesday with a top official warning that taking a major provider of news on the coronavirus pandemic off the air could cost lives.

International watchdogs also condemned the closure of ABS-CBN Corp., which President Rodrigo Duterte has targeted in the past for its critical coverage, as a major blow to press freedom in an Asian bastion of democracy.

The National Telecommunications Commission ordered the media giant to stop operating after its 25-year congressional franchise ended Monday. It reversed a statement to Congress that it would issue a temporary permit while legislators assess a franchise renewal.

Only the House of Representatives can grant or revoke such a franchise but its hearings have been delayed, in part by the country's ongoing coronavirus lockdown.

Reflecting the extent of unease over the shutdown of the network, which went off the air Tuesday night, both the opposition and key Duterte allies questioned the commission’s action. Concerns were also raised by a diverse range of groups, from top business executives to left-wing activists and Catholic church officials.

Vice President Leni Robredo, who leads the opposition, said the timely dissemination of accurate information saves lives in a crisis and helps shape an efficient response and find people who need to be helped.

Rep. Franz Alvarez, who belongs to a pro-Duterte coalition and heads the House Committee on Legislative Franchises, said the telecommunications commission’s order “is a clear encroachment on the jurisdiction of the House.”

Alvarez told ABS-CBN’s DZMM radio station that commission officials told lawmakers in a hearing in March that they would issue a temporary operating permit to ABS-CBN while its franchise renewal was pending based on guidance from the Department of Justice.

“We’re really surprised why they backtracked so they have to explain,” Alvarez told DZMM before it too went off air late Tuesday.

ABS-CBN has more than 11,000 news and production personnel nationwide. Aside from reporting on the coronavirus, which has infected more than 10,000 people and killed 658 in the Philippines, it has also provided truckloads of food and medical aid to more than 2 million people, company officials said.

Founded in 1953, the network was last shuttered under the rule of dictator Ferdinand Marcos and reopened after his 1986 ouster by an army-backed “people power” revolt.

Media watchdogs accused Duterte and his government of muzzling independent media like ABS-CBN that have reported critically on issues including his anti-drug crackdown, which has left thousands of mostly poor drug suspects dead. The brash-speaking leader has accused the network of not airing his paid campaign ad and favoring a rival candidate in the 2016 elections, allegations the company denied.

Phil Robertson, deputy Asia director of Human Rights Watch said ABS-CBN’s shutdown was a “huge blow for press freedom in the Philippines” and deprived Filipinos of information about the epidemic from a major network. Closing the network “in the middle of the epidemic is the height of irresponsibility,” Robertson told The Associated Press.

Presidential spokesman Harry Roque said ABS-CBN was free to seek legal solutions and added that Duterte would have rescued the company if the president had the power to grant franchises.

But ahead of the franchise expiration, the government's solicitor-general, Jose Calida, asked the Supreme Court in February to revoke the operating franchises of ABS-CBN and a subsidiary in a separate attempt to shut down the company for allegedly abusing its franchises and violating a constitutional prohibition on foreign investment in Philippine media. ABS-CBN denied the allegations.