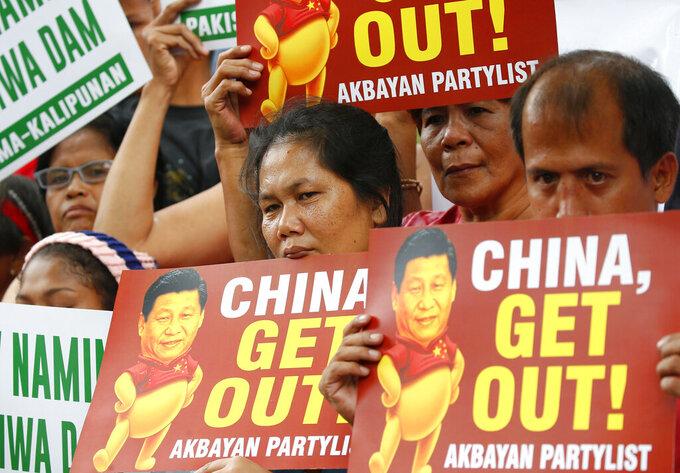 FILE - In this Nov. 21, 2018, file photo, demonstrators rally outside the Chinese Consulate to protest the two-day state visit in the country of President Xi Jinping in Manila, Philippines. The Philippines on Wednesday, April 22, 2020, has protested China’s declaration of a Manila-claimed South China Sea area as part of Chinese territory and the aiming of a weapon on a Philippine navy ship, the country’s top diplomat said Wednesday. (AP Photo/Bullit Marquez, File)

MANILA, Philippines (AP) — The Philippines has protested China’s declaration that a Manila-claimed region in the disputed South China Sea is Chinese territory, and its aiming of weapons control radar at a Philippine navy ship, the country’s top diplomat said Wednesday.

China’s recent assertive moves in the disputed waterway as the world battles the coronavirus pandemic have been criticized by rival Southeast Asian claimant nations and the United States.

China has declared a section of Philippine-claimed territory to be part of its southernmost province of Hainan, Locsin said, adding that a “radar gun” was pointed at a Philippine navy ship in Philippine waters.

The actions were “both violations of international law and Philippine sovereignty,” Locsin said.

China recently announced the establishment of two districts to administer two disputed groups of islands and reefs in the South China Sea to fortify its claim to virtually the entire waterway, among the world’s busiest. One district reportedly covers the Paracel islands and the other has jurisdiction over the Spratlys, the most hotly contested territory in the strategic waters.

The Philippines has a presence on at least nine islands and islets in the Spratlys, an offshore region where China has turned seven disputed reefs into military-fortified islands, including three with runways. Several governments led by the U.S. have condemned the island-building in recent years as dangerously provocative, but Beijing insists it has a right to build on what it claims as its territory since ancient times.

A Philippine government official told The Associated Press that a Chinese navy ship pointed its “fire control radar” at a Philippine navy ship off Commodore Reef in the Spratlys in mid-February. The radar locks weapons on a target prior to an actual attack, the official said.

Another official said that although the Chinese ship did not fire at the Philippine ship, its action was “very hostile” and “unprovoked.”

The two officials spoke on condition of anonymity because they were not authorized to discuss the delicate incident publicly. There was no immediate comment from Chinese officials.

In addition to China and the Philippines, Vietnam, Malaysia, Taiwan and Brunei have been locked in long-simmering territorial disputes in the South China Sea.

Two weeks ago, the Philippines expressed solidarity with Vietnam after Hanoi protested what it said was the ramming and sinking of a Vietnamese fishing boat carrying eight fishermen by a Chinese coast guard ship in disputed waters near the Paracels.

The Philippine foreign office recalled that a Chinese vessel rammed and sank a Philippine fishing boat last June, leaving 22 Filipino fishermen floating in the high seas. They were rescued by a Vietnamese fishing vessel.

Washington also expressed serious concern over the Vietnamese vessel’s sinking and called on China to remain focused on supporting efforts to combat the pandemic and “stop exploiting the distraction or vulnerability of other states to expand its unlawful claims in the South China Sea.”