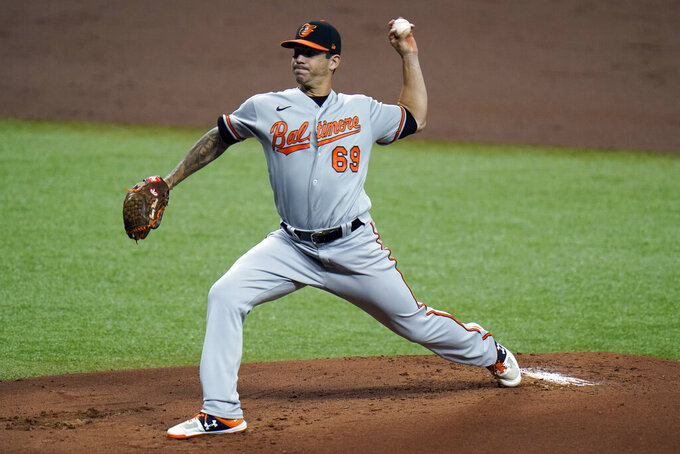 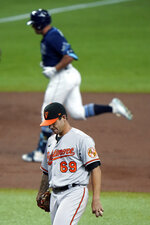 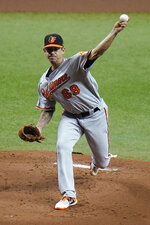 ATLANTA (AP) — Desperate for starting pitching as they pursue a third straight NL East title, the Atlanta Braves acquired left-hander Tommy Milone from the Baltimore Orioles on Sunday for two players to be named.

The division-leading Braves have struggled to put together a rotation behind Max Fried, who is 5-0 with a 1.35 ERA. Ian Anderson, who pitched one-hit ball over six innings in his major league debut last week, is the only other Atlanta starter to earn a win this season.

The 33-year-old Milone will be thrown right into the mix, starting Sunday night's game at Philadelphia. The Braves chartered a flight from Buffalo, where the Orioles were playing a weekend series against the Toronto Blue Jays, to ensure their newest starter wasn't subjected to possible exposure to the coronavirus.

“We've not had any players join us after after taking a commercial flight, and we'd prefer not to do it," Braves general manager Alex Anthopoulos said. “We're not going to take any chances. There's no script for this, but we're always going to err on the side of caution anytime we can.”

Milone gives the Braves another much-needed starting option in the shortened 60-game season, though Anthopoulos will continue to pursue additional pitching help right up to Monday's trade deadline.

He conceded that it may be tough to find another deal.

“There's not a lot of sellers out there. With the expanded playoffs, even the teams that are on the outside looking in are close,” he said. “We didn't want to wait around. If a deal made sense to us, we wanted to go ahead and do it.”

Milone is 1-4 with a 3.99 ERA over six starts in his first season with the Orioles. The Braves initially inquired about his availability shortly after ace Mike Soroka went down with a season-ending Achilles injury on Aug. 3.

“He's thrown the ball really well,” Anthopoulos said. “The change-up has always been his go-to pitch, but he's having more success with that, a lot more success than last year. He's always been a strike thrower, but from talking to him, he feels his command is that much stronger.”

The Orioles will get a couple of prospects who are not in the Braves' 60-man pool of potential players.

After signing a minor league deal with the Orioles in February, Milone received a major league contract in July. He started on opening day as a replacement for injured John Means and has 31 strikeouts and only four walks over 29 1/3 innings.

Milone's best effort of the season — six innings of three-hit ball against Washington on Aug. 7 — earned him his lone win with Baltimore. In his last outing, he took his third straight loss, surrendering four runs (two earned) and two homers in 5 1/3 innings of a 4-2 setback to Tampa Bay.

Any contribution would certainly be welcomed in Atlanta.

In addition losing Soroka, the Braves have yet to get any innings out of newcomer Cole Hamels, who has been dealing with a sore left shoulder since the spring. They demoted two other starters, former All-Star Mike Foltynewicz and Sean Newcomb, to their alternate-training site after poor showings. Another potential option, former AL Cy Young winner Félix Hernández, opted out of the season because of coronavirus concerns.

With their rotation in tatters, the Braves tried 10 starters over their first 32 games. Promising young pitchers such as Touki Tousaint and Kyle Wright were hit hard, finally forcing the team to use journeyman relievers Josh Tomlin and Robbie Erlin as starters. But that clearly wasn't an long-term solution for a team that hopes to win its first playoff series since 2001.

Milone broke into the big leagues in 2011 with the Nationals and has pitched for Oakland, Minnesota, Milwaukee, the Mets and Seattle. He has a career record of 51-51 with a 4.45 ERA.

Anthopoulos said Hamels is making progress and could be an option late in the season. He was scheduled to throw a second bullpen session Sunday, which could possibly lead to a simulated games in the next few weeks.

“He's moving in the right direction,” the general manager said. “We feel like he's turned a corner.”