Pitino back in the NCAA Tournament with MAAC champs Iona 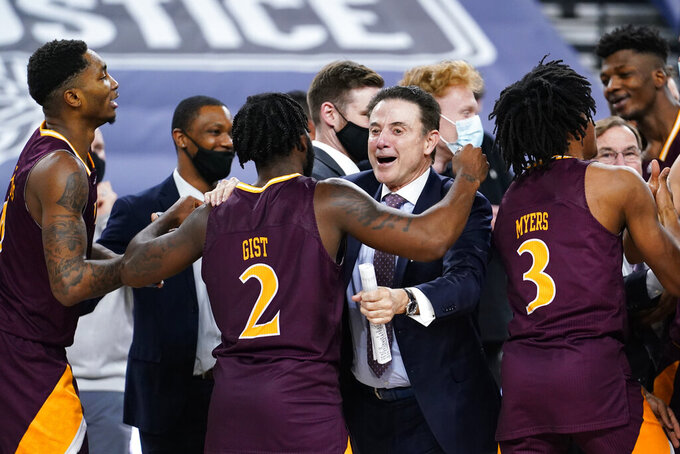 ATLANTIC CITY, N.J. (AP) — Rick Pitino ended an Iona team photo, a championship trophy as the centerpiece, by pointing toward a ladder and telling the Gaels to clip the nets.

He knows the way.

From coaching perennial powers to exile to the New York suburbs, Pitino has navigated a vagabond career bathed in scandal and success the only way he can: by winning.

Asante Gist scored 18 points and Pitino took his record-tying fifth school to the NCAA Tournament with Iona’s 60-51 victory over Fairfield on Saturday in the Metro Atlantic Athletic Conference Tournament championship.

Next stop, the all-Indiana NCAA Tournament.

“I told them I was packing eight suits,” Pitino said. “We have a lot of dirty laundry, and we’re heading to Indianapolis.”

The 68-year-old Pitino was already the first coach to win national titles at two schools (Kentucky, Louisville) and the first to take three schools (Providence) to the Final Four. He led Boston University to the tournament in 1983.

Pitino was hired at Iona (12-5) last March to — yes, to keep the Gaels among the perennial favorites to come out of the MAAC in March — but in large part to rehabilitate his image after an ignominious end at Louisville.

Pitino had a trying first season trying to orchestrate a tourney bid through a pandemic. He contracted coronavirus and the Gaels were forced to stop four times this season because of virus issues — including a 51-day hiatus that sidelined them longer than any team in the country.

Led by the backcourt of Gist and Isaiah Ross, the ninth-seeded Gaels used a 10-0 run to close the first half at Boardwalk Hall. Ross made the postgame walk through the empty seats and kissed his 10-month-old daughter, Averie.

Pitino, his mask on his chin all game, shuffled side-to-side as if in a perpetual defensive drill, yelled instruction, harangued the officials and somehow in the roll of papers he gripped all game had the formula that showed why in stops ranging from Kentucky to New Rochelle, New York, he landed in the Hall of Fame. Well-traveled — with baggage.

Caleb Green buried a 3 for the Stags (10-17) that brought them to 20-18 in the first half before they faded over the final four minutes. Gist hit consecutive jumpers to kickstart the run and send the Gaels into the half with a 30-18 lead.

The championship game sprinkled mostly family and friends inside the boardwalk venue to liven the atmosphere and there was a nice round of applause when Gist needed help to the bench with an apparent knee injury. With Gist out, Fairfield’s Jake Wojcik made a 3 in the second half that made it a four-point game. Gist’s absence was short-lived and he hit a 3 in his return to send the Gaels on their way to their fifth straight NCAA Tournament.

“I don’t think everybody knows what it’s like when we take that pause,” Gist said of the start-and-stop challenges.

Pitino took over a program used to playing in March. Iona had completed a good run under Tim Cluess, who made six NCAA Tournament appearances and won five MAAC Tournament titles in nine seasons before stepping down for health reasons, when it hired Pitino. Pitino gave a postgame shoutout to Cluess.

Iona, an eight-point favorite, didn’t necessarily need Pitino. Pitino had coached at Louisville from 2001-17 before being fired in a pay-for-play scandal and had been coaching in Greece.

“Louisville is a great program. Unfortunately, some people in life did some things wrong and a lot of innocent people have suffered,” Pitino said. “Not only me, but a lot of innocent people that are behind the program and that's disappointing. But I'm the leader of this ship. I said it over and over. I deserved to be fired because if somebody under me did the wrong things, I deserve it.”

Iona President Seamus Carey, who met with Pitino in Spain, and athletic director Matt Glovaski ignored the sex scandals and FBI investigations at Louisville and got their man.

“They’ve benefited from having him in the league and we’ve benefited from the PR,” MAAC Commissioner Rich Ensor said. “Now, there was some controversy, but that was a hiring decision. Once they’re hired, I work with whoever’s there.”

Pitino said he intended to finish his career at Iona, calling it “a great way to end a very long career.” But there's little doubt the majors will call him again, and that vow of a final stop could instead be simply a stepping-stone toward the next job.

Iona is a school where coaches usually start their careers, not end them.

The Gaels only cared about the final snapshot — Pitino waving the net and draping it around his neck, one more for the championship collection.

Iona: Pitino joined Lon Kruger and Tubby Smith as the only coaches to take five programs to the NCAA Tournament. Ensor credited Pitino for the inspiration behind the MAAC’s “Time Out for Black Lives” reading program that focused on Black culture. Pitino selected “A Nation’s Hope: The Story of Boxing Legend Joe Louis.”

“For the young coaches that we typically have in our league, he provides a learning experience they would rarely get," Ensor said. "Rick come to us at the pinnacle of his career. He’s had all the accolades. Now you have all these coaches with the opportunity to watch him. Sometimes I wish they wouldn’t watch him in action. He can be kind of animated on the sidelines and can work the officials like a Hall of Famer.”

“If we keep doing what we’re doing, showing up every day putting the work in, we’ll be back in this game with a different result,” coach Jay Young said.

The MAAC has one more year left on its contract to play in Atlantic City and Ensor hoped the conference will remain in New Jersey. Ensor said even in a pandemic the conference met its commitment in hotel rooms.