Pitt races away from Austin Peay, 55-0 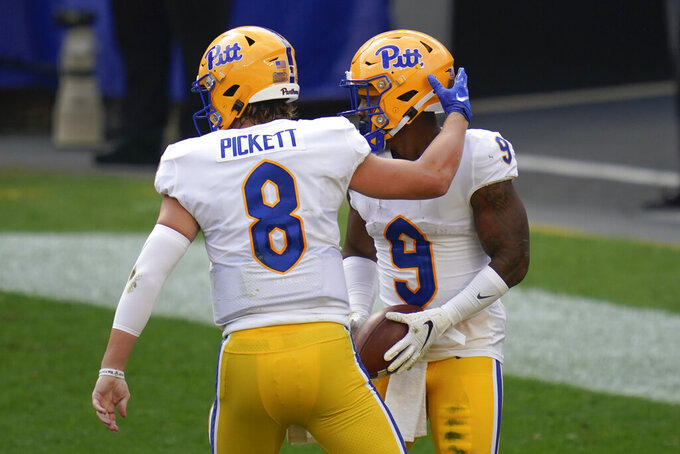 Pittsburgh wide receiver DJ Turner (9) is greeted by quarterback Kenny Pickett (8) after scoring a touchdown against Austin Peay during the first half of an NCAA college football game, Saturday, Sept. 12, 2020, in Pittsburgh. (AP Photo/Keith Srakocic) 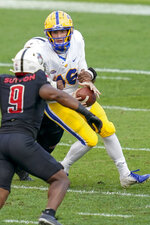 PITTSBURGH (AP) — Kenny Pickett threw a touchdown pass and ran for another as Pittsburgh scored on each of its first six possessions in its season opener, and raced to a 55-0 victory over Austin Peay at Heinz Field on Saturday.

Pickett and offensive coordinator Mark Whipple spread the love around as Pickett threw to seven receivers and six players scored touchdowns during the Panthers’ offensive explosion.

A Paris Ford interception set up Pitt’s first score, a 1-yard Daniel Carter plunge. Pickett connected with Shocky Jaques-Louis on a 68-yard strike before scrambling into the end zone from six yards out to score on Pitt’s second drive. He then connected with wide-open Maryland transfer DJ Turner for a 51-yard score.

After that, Whipple turned over the offense to the running game, with Vincent Davis scoring on a one-yard rush, Israel Abanikanda scampering to pay dirt on a 10-yard draw, and Todd Sibley, Jr. plunging in from one yard out on Pitt’s three second-quarter possessions.

Pickett finished 14 of 20 for 277 yards. Freshman Jordan Addison was his most frequent target, hauling in seven catches for 35 yards.

The Pitt defense pitched its first shutout since 2014, holding the Governors to 146 yards of total offense and 10 yards rushing.

Sibley blocked a punt and returned it for an 11-yard touchdown and Davis scored again on a short rush after a second botched Austin Peay (0-2) punt in the fourth quarter.

The teams agreed to play 10-minute quarters in the second half. Seven Pitt players were held out of the game due to COVID-19 protocols.

Pitt has generally played things close to the vest on offense in openers against Football Championship Subdivsion teams under coach Pat Narduzzi, which has resulted in some closer-than-expected final scores. But the Panthers’ offense was anything but conservative in the first half, with Pickett repeatedly connecting on deep passes. The result was Pitt’s highest first-half offensive output since 2014, the year before Narduzzi took the reins.

Austin Peay is 1-25 against Football Bowl Subdivision teams since 1980. The Governors’ last win against a higher-level team came against Kansas State in 1987.

Pitt (1-0) will host Syracuse (0-1) to begin Atlantic Coast Conference play on Sept. 19. The ACC teams are playing just one non-conference game as part of an 11-game schedule this season.

Austin Peay (0-2) visits No. 20 Cincinnati in the Bearcats’ season opener. That game will be the finale of a three-game fall non-conference schedule for the Governors. The Ohio Valley Conference has postponed its conference games until the spring.