Pitt to rely on dominant defense to gain traction in ACC 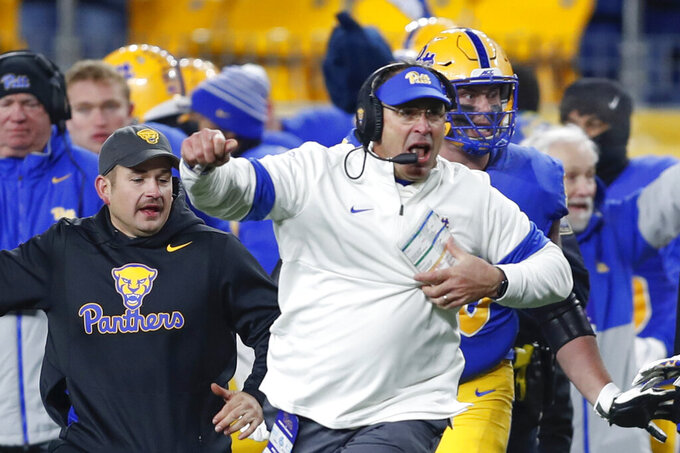 FILE - In this file photo from Nov. 14, 2019, Pittsburgh head coach Pat Narduzzi, center, celebrates a 34-27 overtime win against North Carolina in an NCAA college football game in Pittsburgh. Narduzzi enters his sixth season at Pittsburgh with a potentially dominant defense, and little respect. The Panthers didn't receive a single vote in the preseason AP Top 25, a sign his program still has something to prove in 2020. (AP Photo/Keith Srakocic, File)

PITTSBURGH (AP) — Pat Narduzzi's makeover at Pittsburgh is nearly complete. Entering his sixth season, the Panthers have adopted the identity of the swaggering defenses Narduzzi put together so regularly during his lengthy tenure as defensive coordinator at Michigan State.

Yet for all of the gaudy numbers Pitt put up in 2019 — including tying for the national lead in sacks per game while finishing 15th in overall defense — it hasn't exactly translated into copious amounts of buzz. The Panthers failed to receive a single vote in the preseason Top 25 despite coming off their third eight-win season of Narduzzi's tenure.

While Narduzzi stressed “I don't look at that stuff,” he knows his players do. And he fully expects the perceived lack of respect to provide fuel for a group that's been chipping away at sustained success during his tenure, if not quite fully grasping it.

“I would hope they play with a chip,” Narduzzi said.

Their coach certainly has one. Narduzzi is bullish on the Panthers, who again should have one of the top defenses in the Atlantic Coast Conference but face a reconfigured schedule due to the COVID-19 pandemic that now includes both No. 10 Notre Dame and No. 1 Clemson.

Whether Pitt survives will depend largely on whether an offense that managed just 21 points per game (114th in the FBS) can take a sizable step forward under second-year coordinator Mark Whipple.

“I'll take our quarterback any single day,” Narduzzi said, defending senior and two-year starter Kenny Pickett “I like the football team we've got."

Though junior defensive tackle Jaylen Twyman — a revelation in 2019 when he became a second-team All-American after Rashad Weaver went down in the preseason with an injury — opted out of 2020, the defensive front remains formidable. The secondary received a boost when the NCAA granted Damar Hamlin another year of eligibility.

“We eally don't even want to look at it as divided, that defense as the face of anything," Hamlin said. “We're a team. We're trying to win games. That's why we all came back. That's why we're all here right now. To win a game you need offense, defense, special teams. You need everything. So face of a team? There is no face of this team."

The giddy afternoon in November 2017, when Pickett burst onto the scene as a true freshman while leading an upset of second-ranked Miami, remains the most indelible moment of his career. Though he threw a career-best 3,098 yards in 2019 in Whipple's pass-heavy attack, he also managed just one more touchdown (13) than he did the year before (12) despite 159 more attempts.

Pickett needs to become more potent in the red zone and not just between the 20s to help out a running game that struggled to gain any traction last season.

The steady pipeline of game-breaking running backs the Panthers have produced through the years dried up in 2019. Part of that was Whipple's decision to have Pickett put the ball in the air more, but the inability for anyone to emerge from a crowded backfield picture was a big problem. A.J. Davis figures to get the first crack after posting a team-high 530 yards rushing, the team's lowest total by a leading rusher in 16 years.

While Twyman is gone, Weaver and defensive tackle Keyshon Camp — injured in the 2019 season opener against Virginia — both return. Along with Patrick Jones, they give the Panthers a defensive line that will be among the best in the country. Weaver, considered to be an NFL prospect before going down last summer, had 6 1/2 sacks as a junior while leading the Panthers in sacks, tackles for loss and fumble recoveries. Camp has been solid when he's played, but his health is an issue. He's appeared in just 8 of 26 games over the last two seasons due to injury.

While Twyman said his decision to skip the season was not COVID-related, the timing of his departure in early August raised questions. Narduzzi has praised his team's adherence to the safety guidelines and the Panthers have missed just one practice during training camp, a one-day shutdown ordered after players complained of several COVID symptoms, including headache and muscle pain. The tests came back negative and Narduzzi chalked it up to the aftermath of the team's first padded practice.

So long Duke. Virginia too for that matter. Both ACC Coastal Division rivals are off Pitt's schedule after the conference went redrew its plans amid the pandemic. Instead the Panthers will face Louisville at home and No. 1 Clemson on the road. Pitt stunned the Tigers in their previous trip to Death Valley in 2016.

Three non-conference games — none of them against a Power Five school — are off the schedule. Austin Peay agreed to be a last-second fill in and will travel to Heinz Field for the season opener on Sept. 12.

Pitt's season will likely boil down to how it fares during a crucial three-game midseason stretch in which a visit by Notre Dame is sandwiched by trips to Miami and Florida State.