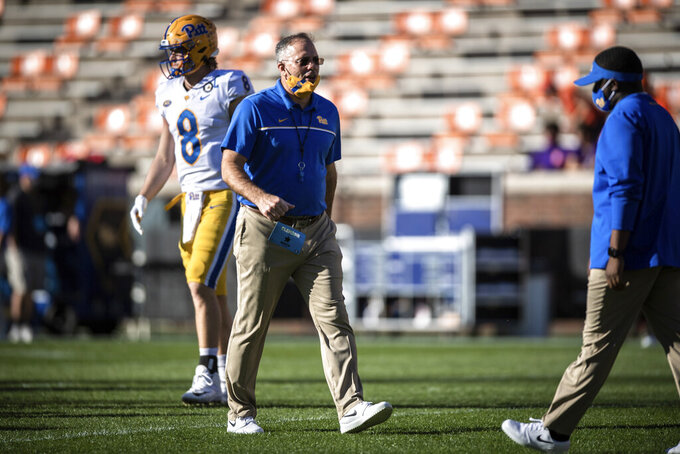 PITTSBURGH (AP) — Six months working inside the confines that came with playing college football in the middle of a pandemic was enough for the Pittsburgh Panthers.

Pitt removed itself from bowl consideration Friday, a day after finishing off the regular season at 6-5 following a 34-20 victory over Georgia Tech. The school became the second member of the Atlantic Coast Conference to opt out of the postseason, joining Boston College, which announced its decision Thursday.

The Panthers voted to decline a bowl invitation if offered, a move that drew the full support of head coach Pat Narduzzi and athletic director Heather Lyke. Pitt players arrived on campus in early June and spent months getting tested three times a week while trying to abide by strict COVID-19 protocols, which included isolating themselves from their families.

“Our football student-athletes’ sacrifice and commitment have been extraordinary,” Lyke said. “This season has been an especially taxing experience, physically and mentally, on and off the field. Despite this unprecedented environment, our team finished strong concluding with last night’s win at Georgia Tech.”

Narduzzi said earlier in the week that Pitt would accept a bowl bid if offered one, while at the same time acknowledging how difficult this season has been on his players and hinting that it might be time for a break.

“Bowl season is never easy on our kids ever,” Narduzzi said Monday. “And it will be even harder when we say you can’t go home for Thanksgiving; you can’t go see your parents; what are you doing; stop that. It’s not an easy time for anybody.”

“In my three decades as a coach, I’ve never been around a group of players who have faced greater challenges beyond the field than our team this year,” he said. “And yet, from the time they arrived back on campus in early June, these young men never wavered.”

Pitt was not immune to the effects of COVID-19. The team's initial visit to Georgia Tech scheduled for Nov. 14 had to be pushed back nearly a month following COVID-19 issues within the program.